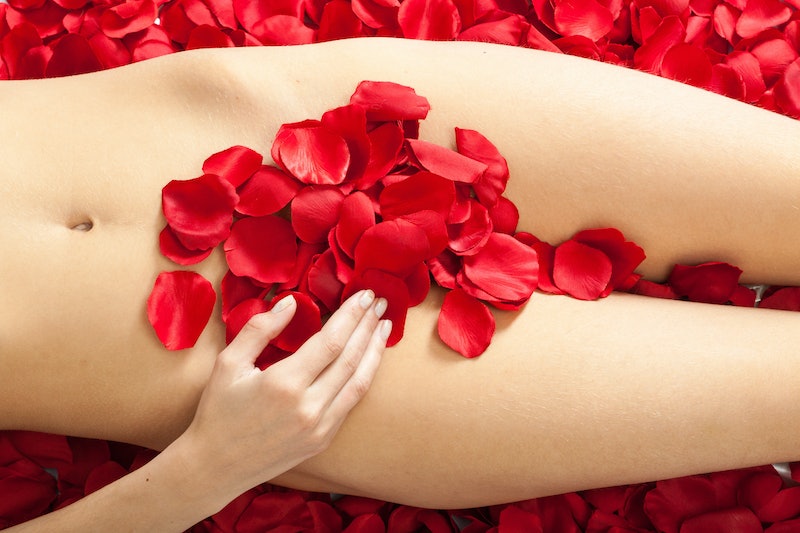 With all the nicknames floating around for the vagina — and the websites dedicated to hashing them out — we have to wonder if all the seemingly playful banter is doing us any good. A lot of the words used to speak of our lady parts are, frankly, a bit nasty. Terms like "panty hamster" and "beaver" need to be retired, as writer Naomi Wolf reminds us in her book Vagina: A New Biography .

The vagina was once considered an incredibly sacred thing, the gateway between heaven and planet Earth. Wolf writes of the Indian Tantric culture, from 1500 years ago, and the 1000-year-old Chinese Han dynasty; both believed our lady parts were life-giving, and if men ever wanted to reach balance and health in their lives, they had to learn how to properly handle that region of a woman's body. It was referred to as a "flowery pool" or "mysterious gate." Now that sounds more like it.

Richard E. Nisbett, a psychologist at the University of Michigan, says in his book The Geography of Thought that our brains neurally encode the perceptions that are offered to us by our surrounding culture; this means that if a woman continually hears of her vagina being compared to something unpleasant, her mind will shape itself around that idea. During the development of industrialized societies, our notion of the vagina has changed so much that we've lost a lot of the beautiful symbolism that was at the forefront of Eastern cultures. It's not too late to adopt them, though — or at least know what they are so our vaginas can get a well-deserved self-esteem boost.

Here are seven ancient symbols of the vagina that will make you smile.

I bet the majority of Christians out there don't realize that the fish used today to refer to Jesus, officially called the ichthys, originally represented the vagina. It was an ancient symbol that pretty much showed up next to any fertility goddess, including Atargatis, the Syrian fertility goddess; Aphrodite, the Greek goddess of love and sex, and the pagan Great Mother goddess.

It has been said that it was chosen as a symbol of Jesus because it was so commonly known and used, but there have been a lot of attempts to separate it from its vaginal roots — especially by Christian scholars, because heaven forbid Jesus is so closely connected to a vagina. I bet you'll never look at those little bumper stickers the same way.

How lovely it must have been to constantly have your genitals compared to such a gorgeous piece of nature. The Chinese Han and Ming dynasties especially alluded to this symbol when speaking of the heavenly vagina; the term "golden lotus" was used often in poetry and sacred Taoist texts such as Art of the Bedchamber . It was said to be the core of a woman's potent yin essence, which keeps the universe in harmonious order.

Physically and biologically speaking, the lotus is a fragrant flower, pink and plump, that is known to beautifully blossom in spring, just when the time is right — sounds about right, doesn't it? It's also an Indian symbol of wisdom and vital energy; you may have seen pictures of it splayed across your yoga studio. Gives your practice a whole new meaning.

This piece of sacred geometry is the intersection of two circles with the same radius, referring to the meeting of the pairing worlds: the sacred and earthly. In Italian, it's called a mandorla, which is an almond shape found in many Renaissance paintings, holding the Virgin Mary, who represents the liminality between divine and worldly.

These days, the vesica piscis is spoken of briefly in geometry — and sometimes seen on someone as a cool tattoo — but most of us have never learned the deep significance of this shape, and how it is meant to celebrate the vagina as a gateway to heaven.

The name of this delightful fruit comes from a Latin word "granatis," which means seed of grain. Greeks referred to the pomegranate as a gift of love that is continually inviting, and it symbolizes fertility, abundance, and the arrival of spring. While it's often used in works of art to allude to the beauty and exuberance of the vagina, it specifically is meant to represent the ovary and ova cells.

It's been linked in the Renaissance period to paintings of the Virgin Mary and her son, the ultimate gift to humankind. The juice that comes from the fruit is meant to represent blood — both menstrual blood and the blood of Christ — that is eternally giving. It's not uncommon to see it called the "blood of life."

The first thing that probably comes to mind is how the snake tempted Eve in the Bible to eat a piece of fruit that was supposedly forbidden, but Wolf argues that this was one of the first times the serpent had been negatively portrayed in relation to females. Long before that, Egyptian goddesses, representing nature and beauty, were portrayed with snakes in their hands, and these animals were always tied to divine sexuality.

During the Ancient Crete civilization, from 3000-1200 B.C., images of the Great Goddess always had snakes entwined around her to represent birth, regeneration, and overall protection. The famous Greek text Metamorphoses told the story of Arethusa, who transformed herself into a serpent, representing the powerful vulva, in order to properly mate with her true love.

In Sumerian hymns that praised women as goddesses, the vulva was often called "a boat of heaven," a vessel meant to carry all the most wonderful gifts from heaven down to the mortals. Wolf argues in Vagina that by calling this part of our bodies a boat, this culture was acknowledging every woman's connection to the earth's fertility.

Devadatta Kali writes in In Praise of the Goddess: The Devimahatmaya and Its Meaning that the ancient Indian text, the Devimahatmaya, from 16 centuries ago, identified the womb as floating in the middle of the ocean, extending through the sky to bring down creative power to the earth below. The Divine Mother and her boat of a vagina are considered the center of the universe.

Poet John Donne from the early 17th century loved to compare the vagina to a natural treasury of the New World; he even called it a "mine of precious stones," where the most stunning wonders could be found. But he definitely wasn't the first to see it that way — Taoist sexual texts from a couple thousand years ago specifically use jade as a symbol of the vagina and female sexuality in general.

The opening of the vagina was called the "jade garden" and men were instructed to suck on a woman's nipples to extract "jade juice." It reminds us that, back then, these womanly parts were considered extremely special, deserving of TLC on a spiritual level.

More like this
Expert Tips For Being On Top When You're Plus-Size
By Lexi Inks
How To Do The Intimacy-Boosting Lotus Sex Position
By Laken Howard and Lexi Inks
What Is The Forest Personality Test? The TikTok Trend, Explained
By Georgina Lawton
Are Leo & Capricorn A Good Match?
By Kristine Fellizar
Get Even More From Bustle — Sign Up For The Newsletter