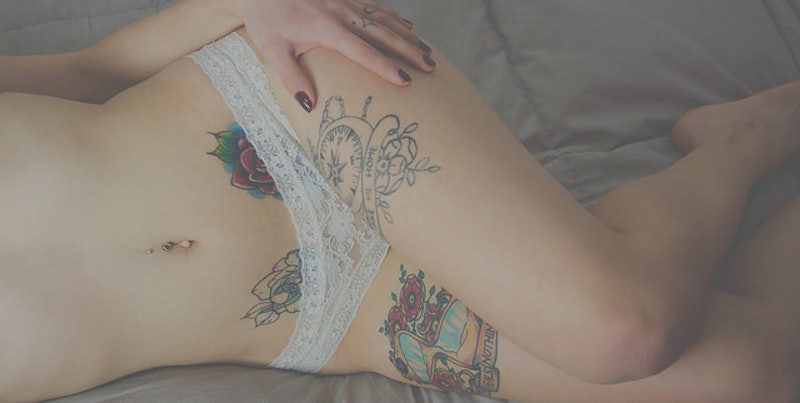 I may be 28 years old, but I'm only recently discovering the wonderful world of vaginas. I mean, I've enjoyed them sexually for a long time, but I never really wanted to know much about my vagina. Sure, we all take the necessary steps when we have an "Is my vagina normal?" freakout. We may grab a hand mirror or do some furious internet searching —  but aside from the basics, we probably don't know how awesome they actually are.

I just wasn't into self-exploration or understanding periods or anything. The only real exploration I did was lying on the bathroom floor at 12 figuring out how to use tampons, because I was terrified I would get my period when I was at my dad's instead of my mom's. Then my vagina and I basically went our separate ways, except for the sex.

Vaginas are effing amazing. And I'm embarrassed that some sort of weird body shame kept me from learning or acknowledging that earlier. Now I am their biggest cheerleader, and am constantly learning things about them that I didn't realize were possible. Seriously, it's not all just sex and period and babies and that stuff. Don't believe me? Here are eight awesome things your vagina can do.

1. It Can Clean Itself

Vaginas are amazing at cleaning themselves — in fact, they're incredibly effective. That's a large part of what's happening with that odorless discharge you probably have noticed from time to time — it's sloughing off all the stuff you don't need. And you should leave it to its own devices. All those cleaning products not only perpetuate a horrible myth that vaginas are dirty, but can also cause health problems.

"Our bodies have a natural odor and harsh cleansers to remove it may do more harm than good, and can cause irritation," Erica L. Smith, M.Ed. Sexuality Educator, tells Bustle. So, unless you think you might have an infection, you should just to let it do its thing.

2. Your Clitoris Can Get A Boner

Well, sort of. When you're aroused, the increased blood flow means that the clitoris becomes engorged and firm, similar to an erection — and it's actually incredibly impressive.

"The clitoral legs and bulbs are part of the inner clitoris and... point toward the thighs when relaxed and then stretch backward during arousal allowing the clitoris to double in size as it becomes engorged with blood," Jess O’Reilly, PhD., host of the Sex With Dr. Jess Podcast, tells Bustle. "The bulbs or vestibules of the clitoris underlie the labia and also swell with excitement." There's a lot that goes on, without you even realizing.

3. It Can Feel Twice As Much As A Penis

That's right, our clit contains over 8,000 nerve endings, more than anywhere else in the body. A penis has half that. So size isn't everything.

Not only are there 8,000 nerve endings at play, it actually connects to an even bigger network of 15,000 more nerve endings — meaning you can feel pleasure in a lot of different places. "Many women achieve orgasms through anal stimulation, and one of the reasons for that is because clitoral nerves travel all the way down there as well," Alexis Thomas, sex educator and owner of the sex-positive shop Taboo Tabou, tells Bustle. "There is really no wrong way to achieve an orgasm, but we should give a lot of credit to those clitoral nerves because they do play a major role one way or another." They are working hard.

4. Your Vagina Can Change Color

Not like a chameleon, unfortunately. Or like a mood ring. How amazing would it be if your vagina was like a mood ring? But they do come in a load of different colors, and some will change color naturally with age.

So if you notice any variation as you get older, it's probably nothing to worry about — you might just have a vagina that's a bit of a shape-shifter over time.

When aroused, vaginas expand through a process known as vaginal tenting, during which it can double in size. But the idea that vaginas can become loose during sex is a total myth — it just doesn't happen. In fact, there are a lot of myths around vagina size that just don't hold up — like the size of your vulva has nothing to do with the size of your vagina, regardless of what people say.

"Considering the fact that the vulva and the vagina are separate entities, the vulva's appearance doesn't necessarily indicate anything about the vagina," Adina Mahalli MSW, a women's health consultant for Maple Holistics, tells Bustle. "For example, a larger labia doesn't mean a larger vaginal canal."

All vaginas are different and, though they expand during sex, they bounce back afterward — like a true superhero.

6. It Can Lift weights

When I say vaginas are strong, I mean really strong. That sort of makes sense, as you can push a living, breathing human thing through them. But besides their natural strength, you can also pump iron to make them even more buff (and to make your orgasms even more intense). Start with contracting exercises, and then, if you want more of a challenge, you can even try vaginal weights. Beat that, CrossFit.

The sky is the limit.

I don't mean queefing, although they can certainly do that. A lot. Your vaginal secretions actually tell you a lot about your fertility, which is why should embrace paying a little more attention to our vaginal discharge.

"If women can view the creation of life and of all that surrounds that process as mystical and fantastic, then such things as a physiological vaginal discharge and menstrual bleeding will not be seen as gross," Felice Gersh, OB/GYN tells Bustle.

You know how sometimes it's clear and sometimes it's more milky or white, or how the consistency can change? Well, you can use this to chart when you're most fertile and ready to make a baby.

8. Your Vagina Can Save A Life

Your vagina is basically an Hermione-Granger-level overachiever. "Oh, make life? Sure, I'll do that, and why don't I just save some lives too, while I'm at it." There is currently a study underway testing the use of menstrual blood to treat those with congestive heart failure. Scientists are extracting stem cells to create muscle cells for the heart. The process is currently just in trial phases, but it's further proof that vaginas can basically do it all.