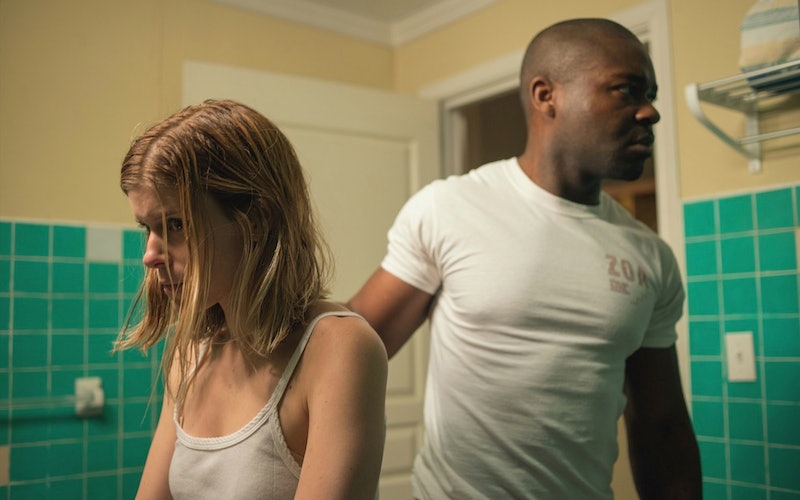 The plotline is so terrifying that you wonder who wrote it: a single mother struggling with a meth addiction goes out to buy cigarettes late at night and crosses paths with an escaped convict who has just murdered four people — and he proceeds to take her hostage. Amazingly, this is what actually happened to Ashley Smith one night in 2005, and the story is the basis for the new film Captive. Smith gave the film her blessing (and even makes a cameo in it), but how accurate is Captive when compared to the real events?

Smith revealed to Fresh Fiction TV that, while there were in fact a few scenes that were added to enhance the story, the movie in general is "pretty dead-on in portraying how everything happened: the emotions I was feeling and the situations as they happened." One such added scene is that of Smith being handed a copy of The Purpose-Driven Life by a woman at a support group (and then trying to throw the book out). In reality, Smith obtained her copy from a church which was giving it away for free as part of a book study group. So while some details surrounding the book and other minor events were changed, what's more surprising is some of the other aspects of the film that are totally true. Here are a few parts of Captive that you'd think were made up but which actually happened in real life.

Smith's kidnapper Brian Nichols asked her if she had drugs, and she gave him her stash of crystal meth. He asked her if she wanted to do the drug with him but Smith declined, which was a pivotal decision for her that evening.

She Read To Him And They Started To Bond

The self-help book played a crucial role in both the real events and the film, and the studio released the above featurette explaining the text's significance to the story.

He Let Her Go

Over the course of seven hours, Smith opened her heart to Nichols through deep discussion and urged him to examine his own life and values. Then she took a risk and told him that she needed to leave to see her daughter. Nichols agreed, giving Smith the opportunity to escape and call the authorities. He surrendered peacefully when the police arrived, and the ordeal ended with no further bloodshed.

Saying "no" to Nichols' offer to use that night was a turning point in Smith's recovery ± she has never used drugs again, and she reported to the Savannah Morning News that she even quit smoking cigarettes.

Ashley Smith's tale is truly remarkable, requiring little alteration by producers in order to be translated to film. While all "based-on" films undergo the Hollywood treatment to some effect, the core facts of Captive ring true. What began as a horrifying situation turned into a life-changing occurrence, and Captive portrays the events in a way that is moving while remaining faithful to the story.