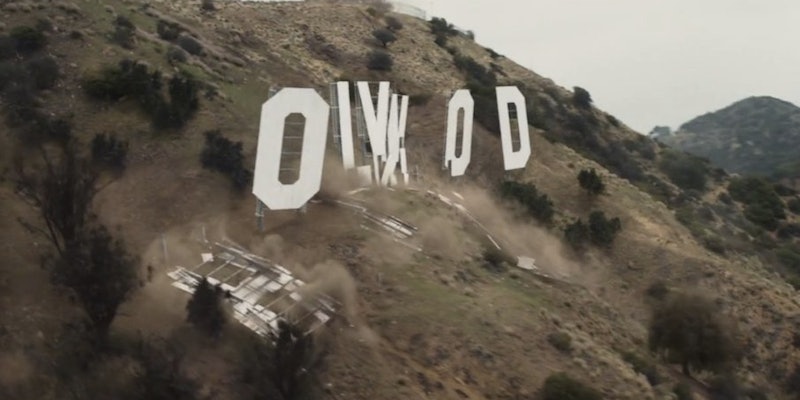 Everybody born and raised in California has had a nightmare about "The Big One," the large earthquake that seismologists predicted would occur along the San Andreas Fault and bring unprecedented damage in its wake. The trailer for the movie San Andreas, starring Dwayne Johnson, makes this nightmare scenario more real than ever, depicting how an earthquake the magnitude of “The Big One” would devour the Los Angeles skyline, San Francisco’s Golden Gate Bridge, and the Hoover Dam. But how much damage could a San Andreas- style earthquake cause, according to actual scientists?

“It’s not possible to have earthquakes that big along the San Andreas fault,” Jordan explains to Bustle. Why? The fault isn’t big enough. According to the U.S. Geological Survey, the San Andreas fault is 800 miles long, running from Northern California to near San Bernardino, and 10 miles deep.

According to the USGS, a huge “mega quake” along the San Andreas just wouldn’t fit:

The largest documented earthquakes to have occurred along the San Andreas fault happened in 1857 and 1906, the latter is known as “The Great San Francisco Earthquake of 1906” and is estimated to between magnitude 7.7 and 7.9, according to U.C. Berkeley’s Seismological Laboratory. By comparison, the earthquake that hit Nepal last month was registered by the U.S. Geological Survey as a 7.8 on the Richter scale.

Since the release of San Andreas last Friday, earthquake experts have weighed in on the film’s unlikely premise and debunked its myths. Could the impacts of a San Andreas earthquake be felt on the East Coast? Unlikely. USGS seismologist Susan Hough told the Associated Press that historical accounts of the 1906 San Francisco earthquake showed that those in western Nevada and southern Oregon could barely feel its tremors. The New York Times didn't publish its account of San Francisco earthquake until the next day at 12:15 a.m.

USGS seismologist Lucy Jones took to Twitter on Thursday to live-tweet San Andreas, backing up Page that the movie's claim that the San Andreas fault opens up is false.

What else does San Andreas get wrong? According to Jordan, earthquake prediction science hasn’t yet reached the level attained by Lawrence Hayes, the film’s fictional seismologist.

“We typically know where all the faults are. We know how big the earthquakes can be and we know how frequently how they occur. But we have a very hard time pinning down when,” says Jordan.

So forecasting earthquakes days or even hours before they occur? That simply doesn’t happen.

What seismologists have been able to successfully predict is the likelihood of a certain magnitude of earthquake occurring. The magnitude 9 earthquakes in the San Andreas film may be unlikely for California, but a magnitude 8 earthquake is a real worry, according to Jordan, and could bring on considerable destruction as far loss to human life and property.

According to the Third Annual Uniform California Earthquake Rupture Forecast released in March, the likelihood of a magnitude 8 level earthquake occurring in Greater California in the next 30 years has raised to around 7 percent, from 4.7 percent since the last forecast.

One unexpected highlight in the report? Due to the 1906 earthquake, the Northern San Andreas fault actually has a lower chance of hosting another earthquake.

Despite its many flaws, seismologists seem to like the film for its ability to get the message out. Jordan, who’s seen the movie, said he enjoyed it. "It'll get people thinking about earthquakes," he says.

One piece of advice you can actually heed from the film, according to Jordan? Even though they may be a departure from reality, one benefit of San Andreas and other films in the earthquake disaster genre is that they get people talking about earthquakes. Drop, cover and hold on. Second nature to anyone’s who’s participated in California’s “Great ShakeOut” disaster drills, the best method to avoid injury in an earthquake is to drop to the ground, take cover under a sturdy desk or table, and hold on until the shaking stops.

But other than that public service announcement, seismologists hope the film’s premise is unlikely to fool anyone. “I don’t think people who watch this movie are going to think this is going to actually happen in California,” says Jordan.

More like this
Jurnee Smollett’s Heart Is Healing
By Rebecca Carroll
The 15 Best Dresses For Hot Weather
By Andrea Gale Boerem
What Is Miles Teller's Net Worth? How The 'Top Gun: Maverick' Star Made His Millions
By Meg Walters
'Dune: Part Two' Could Include A 'Little Women' Reunion
By Arya Roshanian and Alyssa Lapid
Get Even More From Bustle — Sign Up For The Newsletter