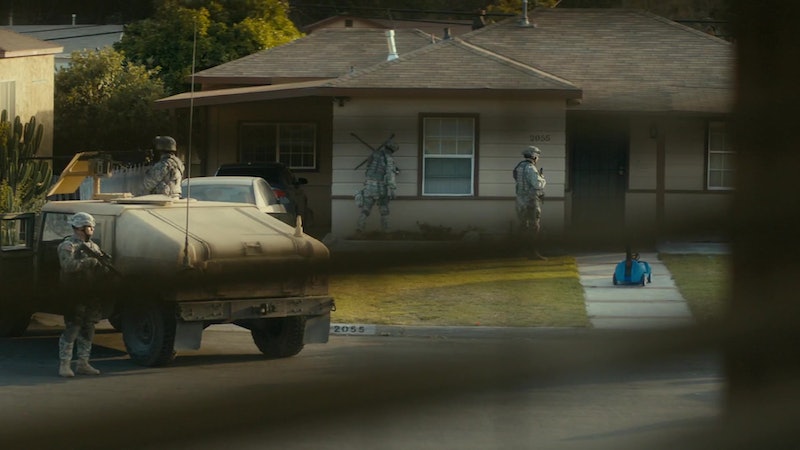 You may not have caught it the first time around, but last Sunday there was a tiny potential connection on Fear the Walking Dead to the original series. As the National Guard took over the neighborhood that our heroes are now trapped in, the soldiers started marking houses with symbols that included a giant "X," pictured above. Not only is this yet another biblical reference in this franchise, but keen fans know that marking territory is common practice on The Walking Dead. Could this be subtle foreshadowing of more connections to come? I certainly hope so!

The military's involvement on Fear The Walking Dead is important to the significance of the franchise for a variety of reasons. For one thing, it strengthens one of the themes of the original series. This may be a dangerous world due to the outbreak, but the dead are not the only thing we need to fear. People are just as dangerous, if not more so in the chaos.

In addition to that, we've never seen any active soldiers on The Walking Dead except in flashbacks. This is particularly spooky because there are a lot of military bases in that part of the country. We saw remnants of the National Guard occupation at Woodbury, but overall it's clear that they were overrun quickly. I know Rick Grimes has talked about going to Fort Benning on a few occasions, but they never made it there. Historically in this fictional world, this is clearly a key step in how everything fell apart, and the more I think about it the more pleased I am that Fear The Walking Dead is exploring it.

That's what makes the Xes so interesting to me. We know that vigilante groups on The Walking Dead like the Terminus termites and the Wolves uses graffiti and symbols. We also know that Morgan devised a system for navigating his neighborhood that used a similar marking. However, not all of the symbols have been explained, particularly the ones that Morgan was following on his trek to reconnect with Rick. What if some of the symbols that Daryl, Carol, Michonne, and all the rest have encountered were left by the National Guard? Could Fear The Walking Dead be answering questions that The Walking Dead asked? Is this the origin of the world's reliance on marking and carving letters into everything? It may not be connected at all, but it would be cool if a prequel spinoff could help crack a code in its own story's future.

There's also, like, the basic unanswered questions about this particular military action. Understanding their priorities is key right now; it's everything. Are they marking houses that have been infected, or houses that still have people in them? The indication of each is vastly different, and could affect how the series moves forward. It doesn't look like our new heroes are getting out of the cul de sac any time soon, so we better start understanding their saviors and/or captors.