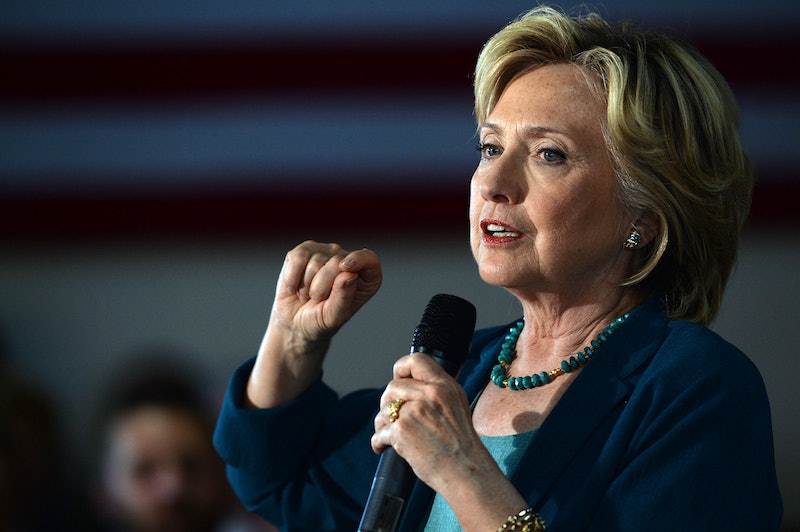 After an entertaining appearance on The Tonight Show with Jimmy Fallon Wednesday night, Hillary Clinton gave her first live televised interview from the campaign trail Thursday. The questions posed by CNN anchor Wolf Blitzer inevitably turned toward the Republican debate that took place at the Ronald Reagan Presidential Library while she was cracking jokes with Fallon, and Blitzer asked her about the Republican presidential hopefuls' criticisms of her continued support for Planned Parenthood. Clinton made a good point about Republicans' Planned Parenthood attacks, saying that medical research on fetal tissue isn't just contained to Planned Parenthood.

Republicans have increasingly been against the reproductive health organization since hidden-camera videos came out claiming that Planned Parenthood was illegally selling body parts of fetuses. The organization clarified that the videos showed their staff talking about the very legal practice of handing over fetal tissue for medical research and an independent firm has proven that the videos were drastically manipulated. Still, many Republican presidential candidates have latched onto the issue as a cornerstone of their campaign. Clinton told Blitzer about Republicans' attempts to defund Planned Parenthood:

If the core issue … has to do with the kind of research that is done legally in the United States, that is an issue that goes far beyond any Planned Parenthood example.

Clinton's right — it doesn't make sense to punish Planned Parenthood for participating in medical research that's not only legal, but also a nationwide practice. Clinton also told Blitzer during the interview:

I think it’s important to sort out — there’s a lot of emotion, lot of accusations being hurled around — to actually figure out what is going on. If its the services [for women] they’re trying to shut down, that is just wrong. If they want to shut down the legal provision of abortion services, then they’ve got a bigger problem, because Planned Parenthood doesn’t use federal dollars to do that. If they’re more focused on the research going on, that’s a set of issues that’s not only about Planned Parenthood.

During the GOP debate, Carly Fiorina dared Clinton and President Obama to watch the Planned Parenthood videos, saying, "Watch a fully formed fetus on the table, its heart beating, its legs kicking, while someone says 'we have to keep it alive to harvest its brain.'" This didn't actually happen in any of the released videos, but it's clear that Fiorina is opposed to the use of fetal tissue for medical research.

Clinton's point is that using tissue from fetuses for research is not unique to Planned Parenthood, so defunding it over its participation is pointless, as other organizations would just continue doing the same thing. If this is what Republicans are so opposed to, they should be fighting to make fetal tissue research illegal, not defunding Planned Parenthood, which, as she pointed out, provides necessary health care to millions of women.