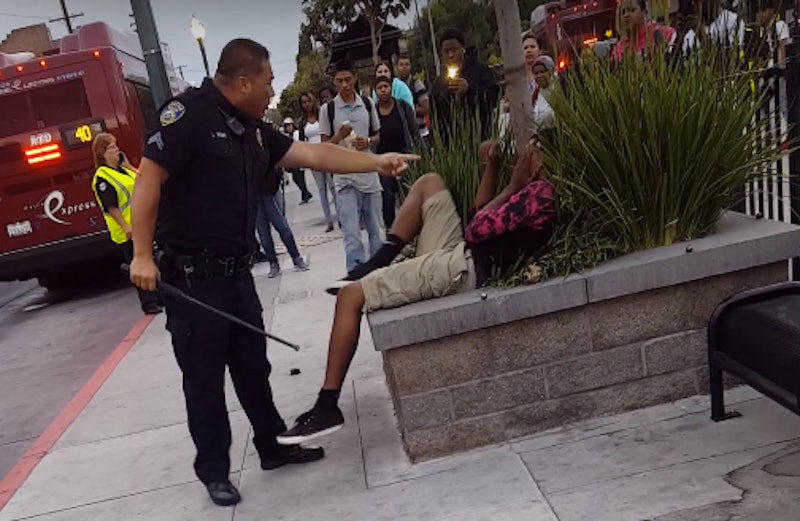 A disturbing video posted to YouTube on Wednesday by Edgar Avendano appears to depict police officers in Stockton, Calif., beating a black 16-year-old after the teen was allegedly caught trespassing in a bus-only lane Tuesday morning. In the video, a Stockton police officer beats the black teenager with a baton when the teen reaches for it after an alleged verbal altercation. While the officer was likely acting within his rights during the incident, the video has raised questions about the necessity of police brutality, especially since the person in question is a teenager.

In the footage, onlookers are horrified as an officer aggressively handles a black teenager who has not been publicly identified. A bystander can be heard shouting at the officers to stop, yelling phrases like "Get off him!" and "He didn't do anything wrong." The onlooker also yells "He's a fucking kid," multiple times, though the shouting is to no avail.

In the video, the police officer tells the teen to "stop resisting arrest," before the teen reaches for the officer's baton, saying "get the fuck off of me" to the officer. At that point in the video, the officer can be seen striking the teenager with his baton, and eight other officers arrive to surround the teen, eventually slamming him onto the concrete. He is seen being escorted away, crying, into a police SUV.

By the Stockton Police Department's account, the teen was not stopped for jaywalking, but because he was allegedly walking in a bus-only lane, which is considered trespassing by law. Joseph Silva, the Stockton Police Department's public information officer for media relations, told Bustle that the teen defied the officer's orders to move out of the bus-only lane before the altercation started. Silva also said that the officer used force because the teen attempted to grab his baton.

Silva explained to Bustle that when the teen reached for the officer's baton, the officer responded with force to maintain "weapon retention" for security purposes. Silva also stressed the statement that "if everyone would just comply with the officers' lawful orders, and, definitely, try not to grab or hold onto any of our weapons, force would never have to be used." According to Silva, the teen's family has filed a complaint against the Stockton Police Department, though a preliminary investigation suggests the officer acted within his rights. Stockton police officers wear body cameras, but the body camera belonging to the officer in question fell off during the altercation, Silva added. The teen was released to his mother after being cited for trespassing and resisting arrest.

Many people, though, are arguing the police's story is an example of unfair treatment of black youth by U.S. police officers. The video, which has been viewed more than 162,000 times on YouTube, has sparked renewed conversations about police brutality. Recent high-profile cases of black Americans being beaten and killed by police officers, including the death of Eric Garner at the hands of police in New York and the fatal shooting of Michael Brown, an unarmed black teen, by a white police officer in Ferguson, Mo., have led to debate about officers' tactics and use of force.

After some of these cases became prevalent earlier this year, The Guardian launched an interactive project, The Counted, which counts the number of people killed by police officers in the country. According to The Counted's statistics, black Americans killed by police are twice as likely to be unarmed as white Americans killed by police officers. The Stockton incident may not deserve to be compared with these more gruesome acts of police violence, but in the wake of recent instances of police brutality, it's hard to blame people for being furious about the video.