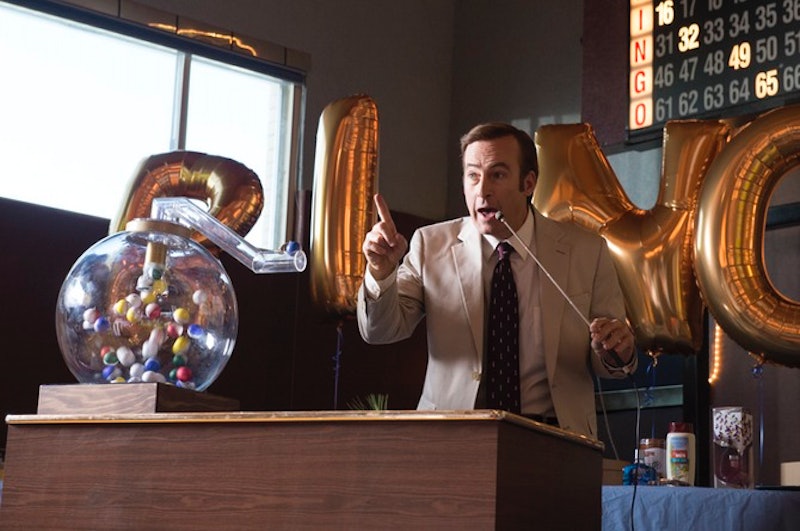 The Emmys are a perfect time to remember all your favorite shows over this past year. And, then once you're thinking about them again, you can start thinking about where they're going to go next. One brand new show for this past season that quickly became a fan favorite was the Breaking Bad spin-off prequel, Better Call Saul . The first season wrapped up this past spring, and its up for a handful of awards on Emmy night (including a nom for Bob Odenkirk for Outstanding Lead Actor in a Drama Series). So, it's time to look forward and think about what will happen on Season 2 of Better Call Saul .

If you need a super quick Better Call Saul refresher, here goes: Back before the era of Walter White, Saul Goodman — SORRY — Jimmy McGill was just a elder law lawyer trying to get his life together. This proved quite difficult, after he wound up in the middle of an embezzlement scandal, and an extensive lawsuit against a retirement home. Those things don't sound too exciting, but for Jimmy, they were way out of his league. This is pre-bright suits Saul. Right now, Jimmy's trying to deal with the fact that his brother claims to be allergic to electricity.

Season 1 ended with Jimmy deciding that he didn't want to get kicked around anymore. So what will Season 2 bring?

The thing about Saul is that Walter White is not in it. He can't be in it, because Saul and Walter White don't meet until the second season of Breaking Bad. However, that doesn't mean the two can't quickly cross paths at one point. Maybe Saul heads to the A1A Car Wash? This is not something that really needs to happen for the plot of the show, but it's necessary for the fans of the show waiting to see Mr. White SOMEWHERE.

Know who can show up before the events of Breaking Bad? Gustavo Fring. We know that Mike met up with Gus long before Walter and Jesse. It feels like at the end of Season 1, that's where Mike is actually headed off to, since he's also had enough of his life (inside a ticket booth at a parking lot).

Speaking of Mike, we need more Mike. We need a lot more Mike. Something amazing would be a continuing story line about Mike and his daughter, and his granddaughter, Kaylee. It's such a stark contrast to see the big-bad muscle Mike play with Play-Doh. But, Kaylee can get him to do that. Though, Season 2 shouldn't just include Play-Doh scenes. Can we see Mike actually become the actual muscle? Preferably, for Gus?

4. Someone Is Going To Die

There are characters in Better Call Saul who are not in Breaking Bad. Namely, Chuck and Kim. One is Jimmy's brother, the other is Jimmy's on and off again love interest. One of them is probably going to die sooner rather than later, I can feel it. My money's actually on Kim, since we're expecting Chuck to die so much sooner.

5. And, Something Horrible Is Going To Happen To Jimmy

What turns Jimmy to the Dark Side Saul? Season 1 showed us a lot of little things that when you put them together add up to a bigger picture. But, there's still a lot more out there that we don't yet know about Jimmy. There's got to be some big event in his life that really turns him away from the straight and narrow path, and turns him crooked. Hopefully Season 2 shows us exactly what.