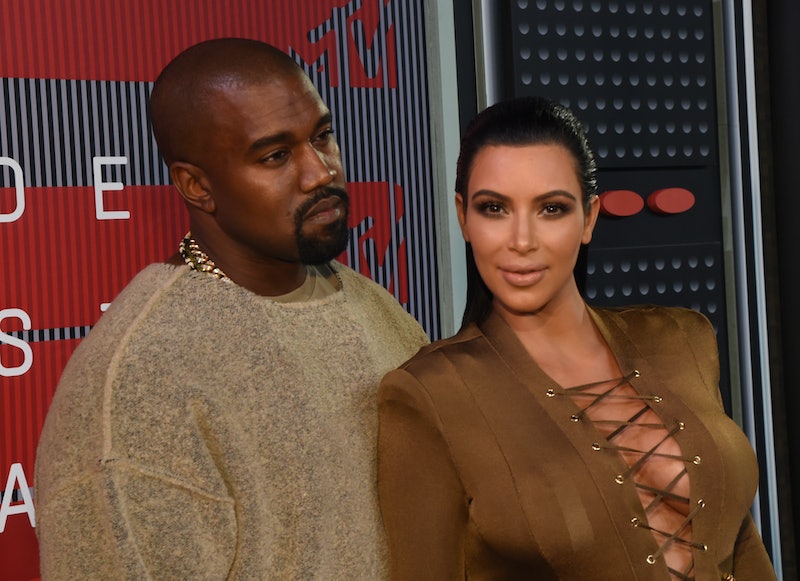 I'm obsessed with the latest jam from Kanye West, and I know I'm not alone on that. Kanye's single "Fade (I Feel It)" was released at his New York fashion show, Yeezy Season 2, and it's all that I can think about aside from Beyoncé's latest track. But this is not about Beyoncé. This is about "Fade (I Feel It)" and all the mysteries that the song is burying within its repetitive, catchy lyrics. Forgive me for wanting to know everything all the time, but, hey, that's kind of my whole job. And the latest thing that I need to know is who Kanye's "Fade (I Feel It)" is actually about. We've already analyzed what "Fade (I Feel It)" is about, but did Kanye have a specific person in mind when he put a pen to paper and started writing these raps?

Considering the fact that Kanye has been happily married to Kim Kardashian since 2014, and has a beautiful daughter named North West with a second child on the way, I just automatically assume that any love song he writes is about Kardashian. It's not like Kanye has been shy about throwing a reference or a rhyme Kim K's way in the past, ranging from the obscene to the romantic to the vaguely offensive. However, considering "Fade (I Feel It)" starts with the lyrics "Your love is fadin'," it's kind of hard to say definitively that Kardashian is the subject of the song. If there's anything that the two do all the time, it's make it clear that they are still as in love now as they've ever been.

So exactly whose fading love could Kanye be talking about? It has to be a romantic option, considering later lyrics include, "I love her, I want her, I'm tryna f**k her." The most likely answer — unless there's some trouble in paradise that Kanye and Kim K are keeping under wraps — is that Kanye is talking about an imaginary scenario rather than about himself at all. After all, it's not like every single song by every single artist has to be deeply personal and written about the people around them. That would give them a pretty limited frame of reference, when they could try imagining new scenarios and writing songs from that point of view.

There's also a small chance that he might be talking about an ex-girlfriend. He's dated such women as Alexis Phifer and Amber Rose before dating Kardashian, after all. I'm not sure how Kardashian would respond to Kanye writing such a hit about an ex-girlfriend, though. No matter how secure she is in their relationship, that still strikes me as a bit awkward. I'm going to go with imaginary subject on this one, because, after Kourtney Kardashian and Scott Disick, and Tim Burton and Helena Bonham Carter, my heart is literally not equipped to handle the break up of another Hollywood romantic staple. And I want to believe Kanye would be too classy to air his dirty marital laundry at Yeezy Season 2 with another child on the way.