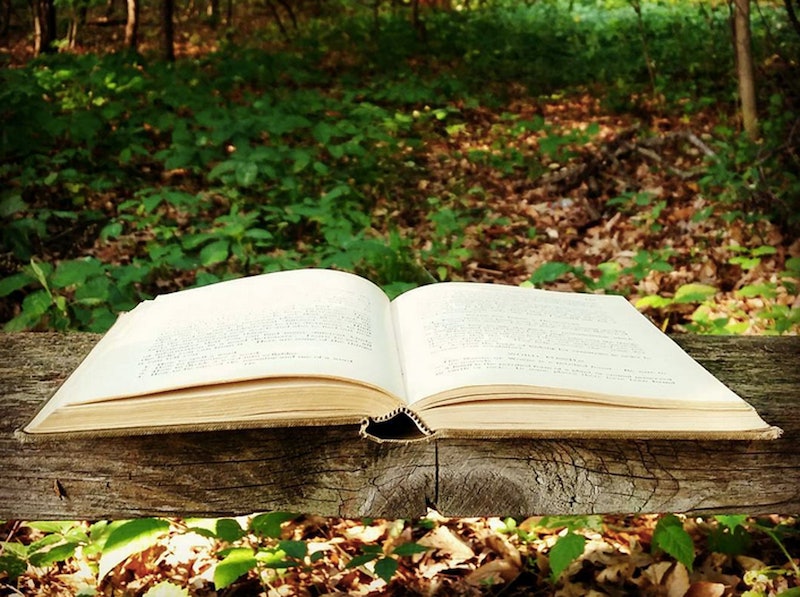 After the onslaught — yes, that's really the only way to say it — of September releases that ushers in the fall reading season, you might still be digging yourself out of a reading wish list that seems entirely unmanageable. The nice thing about October, though, is that it's the first post-summer month during which you've really hit your autumn groove, and can finally dig into new releases... like this list of October's best books, perhaps. If I've hit the nail on the head, don't call me psychic — just come read on top of a leaf pile with me, 'cause that's what I'll be doing.

October's best new books are a delightful mix, mostly because they offer a lot: there are novels, stories, and memoirs from which you can pick. Then there are the authors themselves: We have names on here that are going to get you as excited as they made me — can you say Sloane Crosley and Anthony Marra?— and also others whom you don't yet know — like debut novelist Garth Risk Hallberg — but who have the potential to become major literary superstars.

Whatever you're looking for, grab that steaming hot mug o' stuff, pick up a book, and get reading. 'Tis the sweater season. Not like Instagram hasn't reminded you already.

Julia Elliott may be a wizard, and I don't throw that term around with abandon. She proved to us with her short story collection, The Wilds, that her prose is like nothing you've ever read: sharp, hilarious, dark, and, expansive all at once. With Romie Futch, a book about a divorced South Carolina taxidermist who is haunted by his ex-wife, and arguably isn't taking the best steps to get his life back on track, Elliott has gone above and beyond with an eye-opening gothic satire that pushes the boundaries of dystopia.

The women rendered in Bonnie Jo Campbell's new story collection are almost unbearably human — and that's what makes each character she writes searing and beautiful. With a measured hand, Campbell has composed 16 stories of the grittier side of rural America, not the one often portrayed on greeting cards. The ladies in her stories struggle through difficult power dynamics, tortured thoughts, and invisibility (although that's merely the start). Her seasoned hand has the ability to turn each story into a mirror — although what you see reflected is entirely in how you read.

The Tsar of Love and Techno by Anthony Marra (October 6; Hogarth)

Some books are love at first read, and this is one of them. Anthony Marra, author of A Constellation of Vital Phenomena, delivers his first collection of intimately tied stories (it kind of reads as a novel, actually), arranged into Side A and B and Intermission. With language as precise as a razor blade, Tsar takes us throughout Russia from 1937 to the present with a connected group of characters who, through their explosive escapades, demonstrate the peculiarities and nuances of life. It has everything: humor, action, suspense, drama — I'm going to go ahead and call it brilliant.

The Clasp by Sloane Crosley (Oct 6; Farrar, Straus and Giroux)

You've fallen in love with Sloane Crosley's wry sensibility time and time again in her essay collections, but are you ready to go head over heels for her with her fiction? Because you will. The book, inspired in part by Guy de Maupassant's 1884 short story "The Necklace" (heartbreaking!), takes readers on a hilarious journey from New York to Normandy. This is the kind of book you'll snap up in an instant and push into the hands of your friends, so do get on to reading it ASAP.

If you're having a hard time adulting, you'll appreciate Laura and Tyler of Emma Jane Unsworth's Animals. The novel is the story of two thirtyish best friends who've gone to 11 in everything they've done in their past — especially partying — for the last ten years... but now, real life is staring them in the face, and it's wearing a mean-mug. This book is raw and stripped down in both its actions and messages, but its honest mess is what makes it work so well. That's what this tricky stage of life kind of is, anyway.

The Gap of Time by Jeanette Winterson (Oct 6; Hogarth)

In The Gap of Time, the brilliant Jeanette Winterson retells The Winter's Tale — yes, that Winter's Tale, the same one you're thinking of by Shakespeare — in a new Hogarth Shakespeare series. You don't have to like the Bard to love this book — but if you do, you're seriously in business here, as Winterson gives the characters you know modern makeovers, infusing them as much depth as she wants to push the story forward. Winterson's language can be lyrical and even seductive, which makes this book a fun ride for all.

A House of My Own: Story From My Life by Sandra Cisneros (Oct. 6; Knopf)

If you didn't grow up reading the seminal House On Mango Street... did you really grow up? I kid. (Kind of.) Mexican-American author Sandra Cisneros delivers her memoir this month, which is skillfully executed and bursting at the seams with stories of her childhood, school life, and writing life. It reads seamlessly, almost like a novel, and is the kind of book from which you learn — both as a writer, and as a human. Muy bueno.

Raise your hand if you knew Cleopatra had a younger sister named Arsinoe. Now, put that hand down, because you're lying. We all know the story of Cleo, but with her debut novel Emily Holleman digs into the story of Arsione and also her power-hungry half-sister Berenice. Vividly rendering Egypt, Cleopatra's Shadows is the book for you if you're a historical fiction-devotee who craves a lot from her read: multiple protagonists, lovely writing, and, of course, drama.

If you're the kind of reader who never gave up on the magic of fables and fairytales, head straight for Heather O'Neill's Daydreams of Angels. In this strange yet beautiful debut short story collection, the author seems to have reached into every bizarre fantasy you've ever had and put your musings straight to the page. Although her prose is simple, reflecting childlike wonder, there's still much to unpack. If you leave this by your bedside for nighttime reading, don't blame me if your dreams get weirder and darker.

If there's one book that everyone will be talking about this October, it's City on Fire. (And, similarly, if you're going to spend your entire month reading only one book, you might want to choose this one — because it's 900 pages.) Hallberg's debut arrives to much anticipation after selling for $2 million in an auction to every publisher who saw the manuscript. Well, much to everyone's glee, it delivers. Hallberg's novel paints an epic portrait of 1970s New York that's masterfully written, interweaving the lives of beautifully rendered characters that come together during the 1977 blackout. It's the kind of book whose length you hardly notice because you keep reading, reading, reading.

Colum McCann is a writer's writer — which is why, if you're the kind of person who carves out time each day to get words on a page, it's so easy to fall in love with his new collection. With Thirteen Ways, McCann offers up four short works set around the world — three stories and a novella — that are effortlessly observed and gracefully written. Sure, McCann doesn't mean to remind us that his work is incredibly important to the contemporary canon every time he releases a book, but it's a nice side effect, no?

Smoke has everything Catherine McKenzie's fans will want from her new novel — beautiful pacing, a thick plot, suspense, characters you'll love, and intricate relationships. In other words, everything that'll keep you turning pages. Set in the Rocky Mountains, where a forest fire threatens to swallow a small town whole, Smoke will feel particularly relevant when you think back to the headlines about the wildfires that burned all summer long.

The cover alone on Hunger makes me want to dig out my fire-engine red hair dye, and get right back up against the barrier of the first show show I can find. Oh, those days. In this dynamic memoir, Sleater-Kinney's Carrie Browstein tells her story of coming up through the 1990s feminist punk scene of the Pacific Northwest. Her portrait is vivid, transporting readers back to the intimate moments that sowed her own roots, and made her the cool-girl icon she is today. Brownstein is honest, funny, and, well, everything you want her to be.