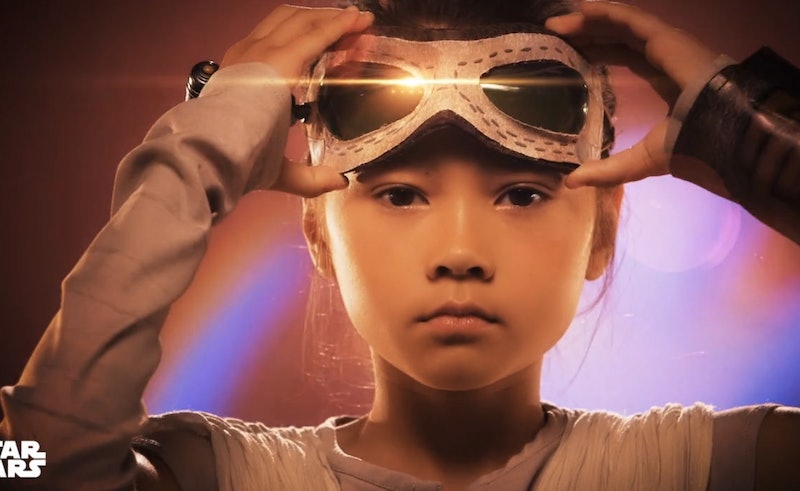 The movement to stop dividing all kids products into "girls" and "boys" has been gaining a lot of momentum recently. The latest victory: Disney's Halloween Costumes are now gender neutral, at least as far as how they're designated on the website. The switch isn't perfect — girls are still the models for all the princess costumes, while boys are modeling the superheroes, for instance — but it's definitely an encouraging step.

The push to stop using gender labels on toys has been going on for a while. People have heavily criticized not just toy makers like LEGOs for their unnecessarily gendered products, but also retailers for dividing toys into different sections for boys and girls — as if boys wouldn't be able to think of something to do with dolls or as if girls can't have fun with action figures. But now it seems retailers are starting to change. Target recently made big headlines for their move away from gendered toy labels in their stores, and now the Disney Store seems to be getting on board as well.

As first noted by The Mary Sue, the Disney Store website hasn't sorted their 2015 Halloween costumes into gendered categories, categories they've used heavily in years past. There are no more labels for "boys costumes" or "girls costumes." Just costumes. The costumes are listed as simply "Costumes for Kids" and the stereotypically male and female costumes are shown mixed together on the same page.

The site still prominently features menu options for products for "Girls" and "Boys," but they have also introduced some items that might traditionally be considered for boys under the "Girls" category, which is also a good start.

Sadly, they seemingly haven't made any similar changes to the "Boys" product category.

Still, the actual toy section itself isn't gendered on the site, though the clothes and accessories sections still use gendered sections. For toys, the site does still divide toys into toys for girls and boys, though again, the girls' section does include things like Star Wars products.

For boys, though, the options are not so inclusive, which is a shame. If girls can — and do — enjoy the absurdly male-dominated world of Star Wars or The Avengers or other Disney-owned franchises, there is no reason boys can't appreciate princesses.

Then again, this is the company that decided they don't need to make more female Marvel action figures because they already have toys for girls taken care of with princesses, so really, any progress is big.

Cutting out gender labels for toys might seem like a small thing, but it can have a big impact. Gender labels for toys is just one of many ways that we instill kids with a sense of rigid gender norms, but as more and more people are realizing, rigid gender norms are kind of awful, for both men and women. Having your self-expression and even your life choices limited by your gender sucks, for everyone, and yet our societies rigid understanding of gender means people are confined by a very narrow set of lines.

But what if, instead of teaching kids all these limiting ideas about gender that they will then either have to unlearn or let confine them in life, we instead didn't teach them these norms at all? Just because gender is an important part of someone's identity that doesn't mean it needs to dictate their options in every facet of their lives.

Seeing more retailers drop gender labels on toys is great, and Disney should be applauded for their choice. Now we just need them to have some girls modeling superhero costumes, and some boys to model a princess dress or two — because girls can enjoy Captain America, and boys can appreciate ruffles, and no one should send them the message that they shouldn't.