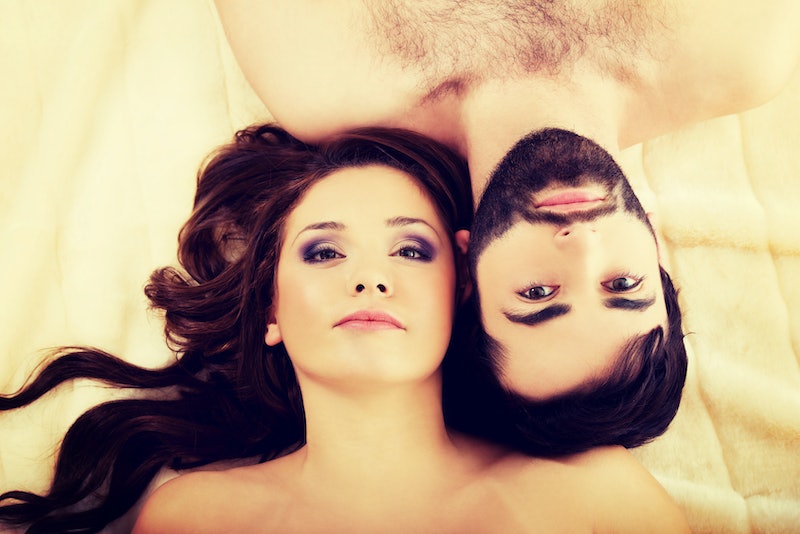 The "Men are from Mars, women are from Venus" trope may be a bit of a stretch, but that doesn't invalidate the fact that women's and men's bodies do have some very distinct differences, particularly when it comes to sex. From timid first kiss to earth-shattering orgasm, the act of getting turned on has long been studied by scientists hoping to uncover the secrets of female versus male arousal.

It goes without saying that arousal is a very subjective experience. No one person has the same mental or physical response to sexual stimuli, and these differences are often magnified between the sexes. Though there isn't a black-and-white answer to "how long" it takes men to get turned on compared to women, a 2006 study conducted in Canada found that it took both men and women, on average, 10 minutes to reach "peak arousal." By taking baseline temperatures of subjects' genitalia and comparing it to the temperature increases after viewing pornography, researchers were able to get an idea of how quickly arousal occurs, and women took just barely longer in this study.

It's not that simple, though, and the question of "how long" is still up for debate. According to Amy Levine, sex coach and founder of Ignite Your Pleasure, women typically take a bit longer than men to get turned on, often requiring 20 minutes of foreplay to become completely aroused. Men, on the other hand, tend to get turned on a bit more quickly.

"For men, on average, it's rather fast — touch, a thought, something visual can do the trick," Levine tells Bustle. It's also worth noting that it's much easier to tell when a man is aroused, because erections are a more tangible indicator of arousal.

However, arousal is all relative: Every body is different, and focusing too much on the amount of time it takes to get turned on can undermine the fun of arousal itself. Regardless, arousal and foreplay are still very important parts of having a great sex life, so here are five other fascinating facts you should know about the art of getting turned on.

1. Women Are Turned On By Much More

Since society has conditioned us to think that men are inherently much more sexual than women, you might be surprised to learn that women are able to get aroused by a much wider variety of stimuli than men. In one Northwestern University study, straight men were only aroused by man-on-woman pornography, while women got aroused by both male and female erotica (and even monkeys having sex!). This is known to experts in the field as a bisexual arousal pattern, and highlights the psychological differences between how women and men view sex.

2. Foreplay Can Happen Before You Get Naked

According to Levine, you don't need to get undressed to start the foreplay process. Because arousal is mental as well as physical, you can engage in foreplay with your partner long before you take things back to the bedroom. Levine encourages "taking your time rather than rushing into vaginal intercourse" because it can increase your pleasure if you "enjoy the sensuousness that intimacy has to offer." One surefire way to do this? Build anticipation by engaging in erotic talk via phone, text, or even email. Phone sex isn't just for long-distance couples: It can add spice to your sex life by ensuring that the foreplay process is as drawn out as possible.

3. There Are "Stages" Of Female Arousal

If you've ever watched Masters of Sex, you know all about the groundbreaking scientists who spent the 60s studying female sexuality. Masters and Johnson are famous for researching the four stages of female arousal: Excitement, Plateau, Orgasm, and Resolution. In the first stage, women become aroused, blood flow increases, nipples become erect, and the pelvic area becomes more sensitive to stimulation and pressure. During plateau, these feelings continue to build, with increasing intensity. Then, of course, comes orgasm, the peak moment when all the tension releases. The final stage, resolution, is a half-hour or more period after orgasm where the muscles relax and the clitoris, vagina, and uterus return to their usual positions.

4. Women's Sexuality Is Just As Animalistic As Men's

The misconception that women's sexuality is all emotion, no physicality is extremely antiquated, and persists even though science has proven that women's sexuality is just as raw, innate, and animalistic as men's. In Daniel Bergner's book What Do Women Want? Adventures In The Science Of Female Desires, he uses sex research to argue that women's sexuality is not as "rational" as we've made it out to be. “Despite the notions our culture continues to imbue, this force is not, for the most part, sparked or sustained by emotional intimacy and safety,” Bergner writes. So next time someone tries to tell you that men want sex more than women, or that women crave romance more than sex, politely tell them to f*ck off.

5. Women Have Wet Dreams, Too

As sex therapist Dr. Jordan Rullo told Men's Health, "nocturnal orgasms" happen in women, and that, just like men, "women can experience genital arousal when their minds happens to wander to sexual thoughts, say during a really boring lecture." The main difference? It may be a bit harder to pinpoint when these dreams occur, because there is no physical evidence left after waking. However, just because women don't technically "ejaculate" doesn't make their nighttime orgasms any less valid, and many women are able to orgasm in their sleep on a regular basis. (Does this mean if I really concentrate on Tom Hardy's beautiful face before falling asleep, he'll give me a dreamgasm?)