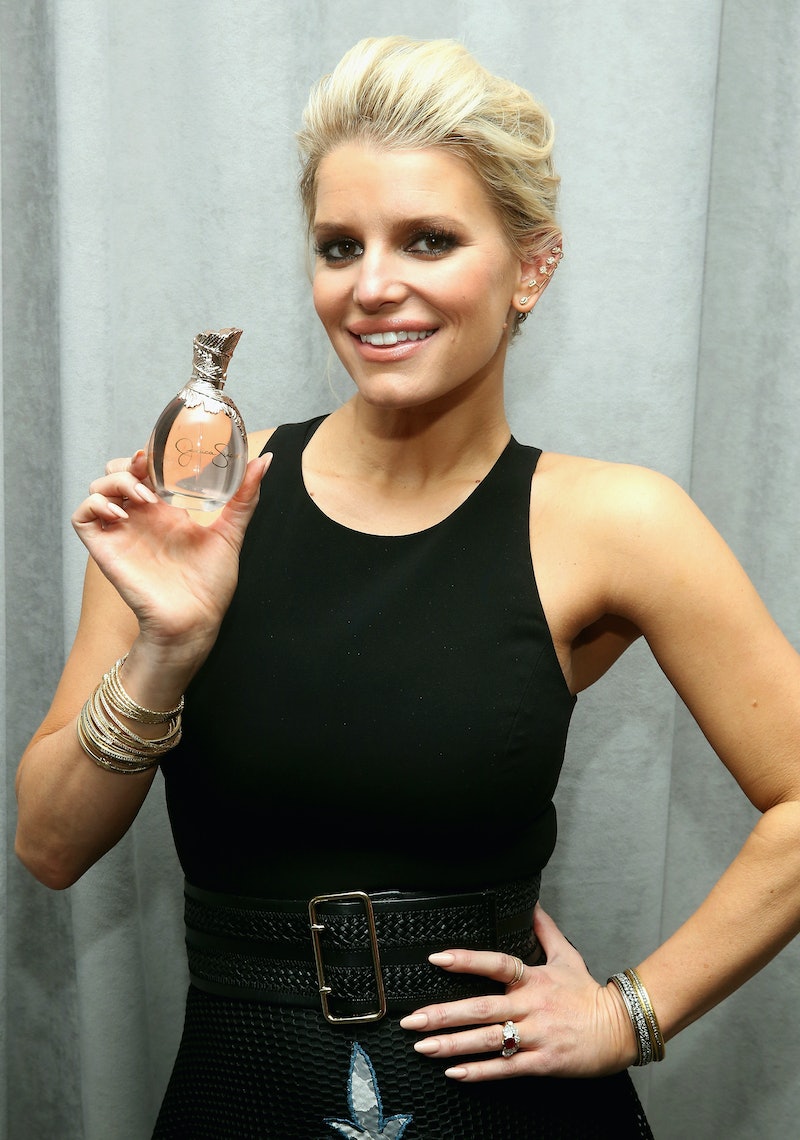 Jessica Simpson has a great number of talents — singing and running a successful clothing and beauty brand, to name just two — but, here's a shocker, she's no Bill Clinton when it comes to public speaking. Jessica Simpson appeared on HSN on Thursday to promote her popular denim line and all hell suddenly broke loose on Twitter. I wish I could say it was because folks can't get enough of her "Kiss Me" Super Skinny Gray Jeans, but that would be a big, fat lie. Simpson slurred her words on camera, spoke some jibberish about how no one, and she means no one, rocks the color gray like her rock star sister, Ashley, and now everyone who has a social media account basically thinks she hit the bottle seconds before airtime.

The 35-year-old mom of two was all smiles on HSN and, in the short clip where she is speaking with host Colleen Lopez, appears to be a little uncomfortable on her feet, as if she's about to topple over any minute. Blame heels for that one. Her words, on the other hand, were indeed a bit odd. "I encourage gray. I feel like Ashely is, like, the best at wearing gray." (OK, I get it, I am not worthy of gray and will not even attempt the Herculean challenge that is gray). "There is something about a gray that is, like, sexy."

It's not so much her words that got everyone talking — remember, this is the same woman who asked ex-husband Nick Lachey whether Chicken of the Sea was chicken or tuna — it's that loosey-goosy way she has of speaking to the audience as if they've saddled up next to her at a Texas bar at half past midnight on a random Tuesday.

Before I continue, you really have to see the clip for yourself:

Twitter just couldn't deal. The hashtag #JessicaOnHSN was created and, with it, the accusations began to fly:

People reports that neither HSN nor Simpson's reps have commented about her appearance, so who knows what was really happening that day. I would never advocate that anyone abuse alcohol or drugs, but I will say this: If Simpson just so happened to knock back a little too much champagne in the green room prior to her appearance, something any mom with two children under the age of four could probably understand doing, this has just become my new favorite video clip.

I have a sneaking suspicion the truth isn't nearly as fun, though. Simpson has proven many times in the past that she can appear drunk even when she's totally sober — it's one of her many gifts. Here are just a few times when she was delightfully ditzy and, I don't think, at all drunk:

Her Iconic Chicken Or Fish Moment

I'm pretty sure this was the exact moment Lachey realized it was never going to work out. His loss — she's obviously joking. Right?!

That Time She Told Ellen DeGeneres She Doesn't Brush Her Teeth

In 2010, Simpson appeared on the Ellen DeGeneres Show and proceeded to admit she doesn't brush her teeth every day because her teeth are already too white. Or something like that. "Because my teeth are so white and I don't like them to feel too slippery but I do use Listerine and I do floss everyday," she said. "But I don't brush them every day. My lips just slide all over the place... I can't catch up with my mouth. I need a little coating..." Then she revealed she'll just "use a T-shirt or something" to clean her teeth.

When She Shared Her Thoughts On Being "Ditzy"

The singer was asked whether she thought there was a difference between being dumb and being ditzy. She delivered the goods with her reply: "Dumb is just not knowing. 'Ditzy' is having the courage to ask!"

Who Cares About The Platypus Anyway?

Back on Newlyweds, Simpson had a difficult time believing any animal could be named a "platypus:" "Platypus? I thought it was pronounced platymapus. Has it always been pronounced platypus?" Awesome.

See? Simpson isn't drunk — she's just happy. And I wouldn't complain if she passed a little of her happiness this way.