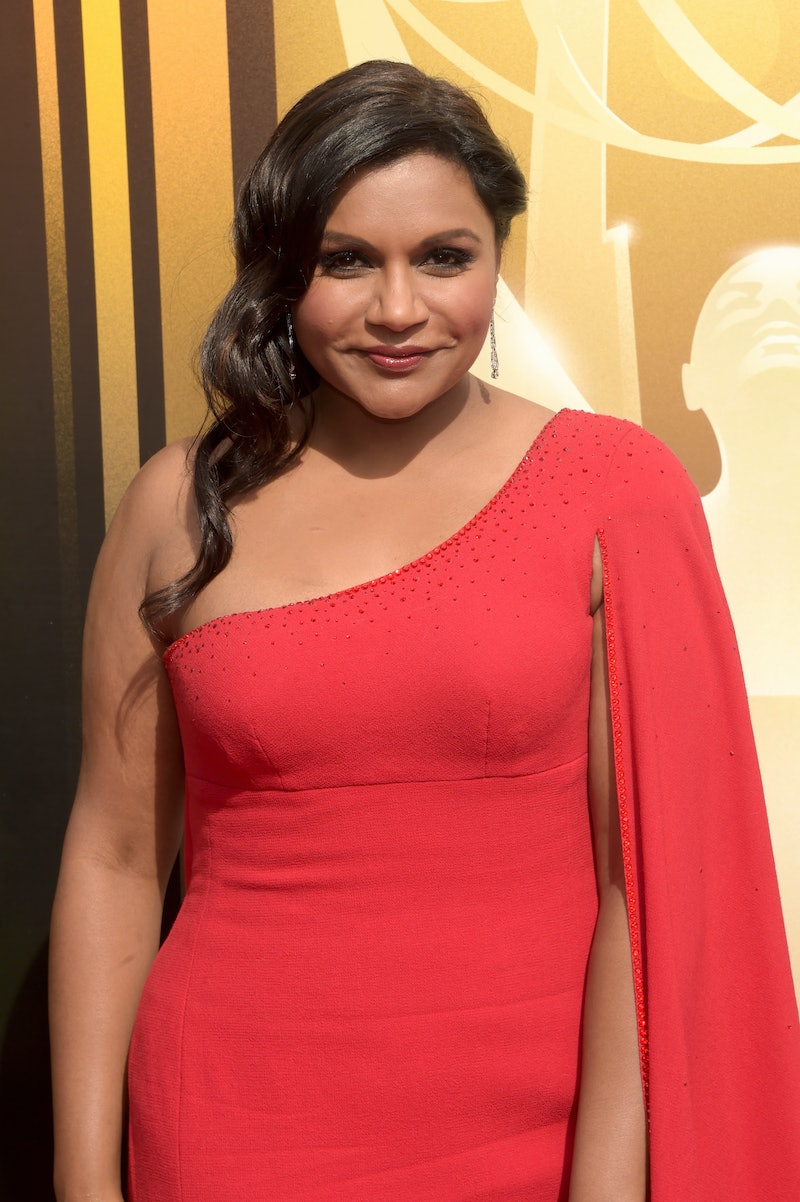 When it comes to women in Hollywood, most actresses are fighting for more intelligent and meaningful conversations on the red carpet. You might have heard of a little something called #AskHerMore, which Reese Witherspoon helped promote during the 2015 Oscars. With that said, you might be surprised to learn that Mindy Kaling doesn't expect #AskHerMore questions on the red carpet, she revealed as part of InStyle's new column and partnership with the non-profit I Am That Girl. Does that mean she wants to discuss her appearance all the time? No. Does that mean she thinks women shouldn't be asked in depth questions? Absolutely not. However, for The Mindy Project star and creator, when she's at an awards show, she's OK with discussing fashion, because that's part of the experience.

After being asked her take on #AskHerMore, Kaling said, "When I’m at an awards show — where every person has just spent three hours getting ready and putting on restrictive undergarments — I don’t really expect thought-provoking questions."

I understand what Kaling is saying and by no means do I think she's slamming #AskHerMore. An awards show is partly about fashion and if I just spent the bulk of my day getting beautified, I wouldn't mind discussing it, either. With that said, that's not all I would want to talk about, because there is so much more to women than their looks and clothing. Kaling would probably agree, and I'm sure she would gladly welcome questions about her work as an actress, writer, and producer.

Actually, when it comes to other types of interviews, the TV star expects and desires an #AskHerMore-style interview. She said,

I will say this: In interviews that are not on the red carpet I do wish people asked me about the process of writing, about how we create the characters on the show, what it’s like writing a book versus a screenplay or an essay versus stand-up comedy. That, to me, is very interesting.

Unfortunately, the former Office actress gets "asked a lot about confidence." She elaborated,

People, especially in the media, are very suspicious of women who don’t hate themselves. And by the way, I’m desperately neurotic. I care way too much about what everyone thinks of me. But in interviews I’m not like, every two seconds, incredulous [over my success]. I don’t beat myself up or make apologies. If I were a man, no one would ever say, "It’s weird that you have this job." But when you’re an Indian woman, people are like, "Aren’t you amazed?"

That right there proves Kaling absolutely supports #AskHerMore and knows she deserves so much more than the "traditional" questions female celebrities are asked repeatedly on the red carpet or in an interview.