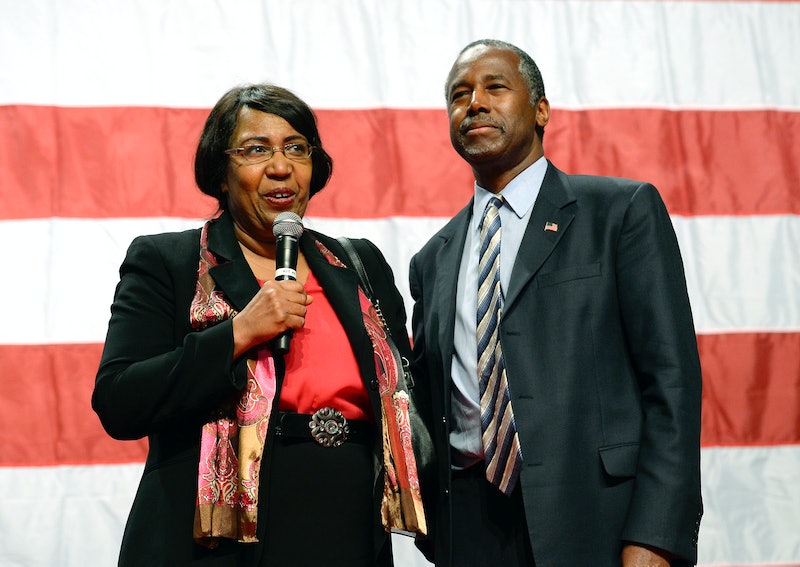 The top of the GOP presidential field sure looks a lot different right now than, well, any mainstream political observer would have predicted. Up top, you're still got real estate mogul and pork chop on a stick annihilator Donald Trump, and right behind him, retired neurosurgeon Dr. Ben Carson. Carson is undoubtedly the cooler-headed, classier of the two men, although his rise is every bit as improbable and surprising — he has no elected political experience, and he's given very little in the way of concrete policy proposals. In fact, he could conceivably be given a run for his money from within his own family — maybe his wife Candy Carson should run for president, because she's just as qualified for the top job as he is.

For those of you who aren't familiar with the Carsons and their story, the pair have been married for more than 40 years. And while you might assume one of the world's most accomplished neurosurgeons would be a hard act to top, Candy Carson has a host of considerable accomplishments in her own right.

For starters, as CBS News details, she's the co-founder of the Carson Scholars Fund, an immensely essential philanthropic effort that helps more than 500 dedicated, community service-minded students go to college each year, with more than 6,700 going through the program since its establishment in 1996. These sorts of scholarship programs are an almost immeasurably positive public good, especially when focused on children and teens who really need the help — each student can receive $1,000 to put towards their tuition, averaging more than $500,000 in payouts per year.

Candy Carson also boasts a hugely distinguished alma mater — she attended Yale University, which was where she and Ben first met. She studied music, psychology, and pre-med while she was there, and ultimately graduated with an MBA.

The musical side of things is something she's even shown off during her husband's campaign, to boot. She's also by all accounts a very skilled violinist, as she displayed by playing the national anthem at Ben's presidential announcement event.

It's not all that uncommon for people to sometimes think, "Hey, I wonder what this candidate's spouse would be like if they were president?" Obviously, anybody who thought that about Hillary Clinton in the '90s might finally get their answer in 2016, and who knows — maybe Michelle Obama will try her hand at elected politics someday? It's by no means impossible. But in Ben Carson's case, as thin as his presidential resume may be to begin with, it makes the question all the more compelling — how different might things be with Candy standing center stage instead?