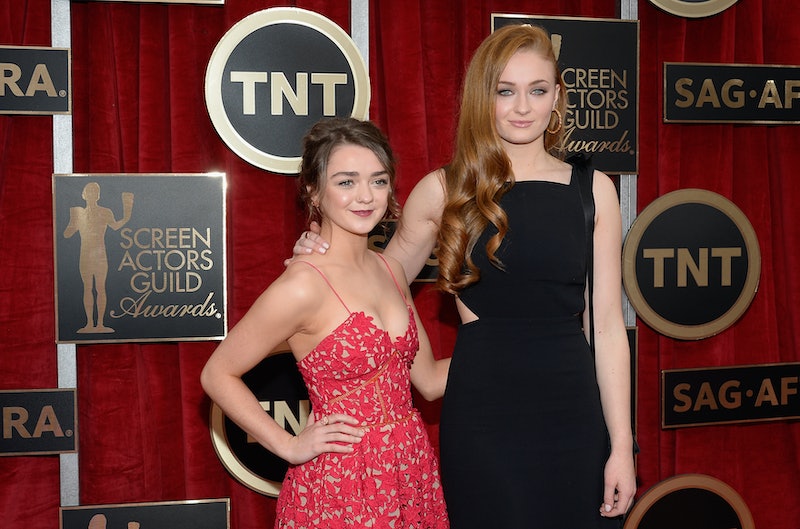 On Game Of Thrones, sisters Sansa and Arya Stark haven't seen each other since the horrible beheading of their father Ned Stark all the way back in Season 1. But you still get the feeling that both of their characters hold on to the shred of hope that some day they'll see one another again; even though at the end of season five, Arya was blinded at the House of Black and White and Sansa was jumping off of a roof with Theon/Reek. But are Sophie Turner & Maisie Williams friends in off the set? Even if the Stark sisters never get the chance to reunite on the show, the actresses who play Arya and Sansa, respectively, are like two peas in a pod. Williams, 18, and Turner, 19, have grown up together on the set of the HBO series that they've both been starring in since they were 12 and 14, and IRL, they are best buds.

In an interview with the New York Times this April before the fifth season of GoT premiered, Williams and Turner talked about their special bond, being such young girls starring on the show. "Our other friends just 100 percent don't get it, so it's nice to be with the one person who does," Williams said of the whirlwind experience of starring on an Emmy-nominated global sensation. They also revealed that they visit each other during the summers—aw!!! So even if Sansa and Arya never meet again in Westeros (I don't think George R.R. Martin would give audiences such a happy ending; he likes to make them sad), Maisie and Sophie are bound to be best friends forever. Here are seven photos that prove Williams and Turner are as close as sisters in real life just like on Game Of Thrones:

They Hang Out Off-Set

They Take Goofy Selfies Together

I love cool, powerful young women who are friends.

And Aren't Afraid To Make Fun Of Their Characters

They Have Fun At Work

Even when they have to do very professional photoshoots.

Oh, you know, like jumping on a private jet.

They Love Their Other Co-stars, Too

They Give Each Other The Giggles

Thank goodness these two cool teens have found each other, and both of them are becoming strong young women who will certainly have long careers after the Stark girls are no longer on TV (but that won't be for quite a while, luckily). I hope Williams and Turner stay friends forever, even if the Stark sisters never meet again.

More like this
'GoT' Star Emilia Clarke Says She "Just Can't" Watch 'House Of The Dragon'
By Brad Witter
Mollie Gallagher Has A Deeply Personal Reason For Taking Up Skating
By Maxine Harrison
A New 'And Just Like That' Table Read Pic Confirms A Key Character's Return
By Jack Irvin and Grace Wehniainen
This 'Gossip Girl' Wardrobe Error Has Gone Viral On TikTok
By Alyssa Lapid
Get Even More From Bustle — Sign Up For The Newsletter
From hair trends to relationship advice, our daily newsletter has everything you need to sound like a person who’s on TikTok, even if you aren’t.