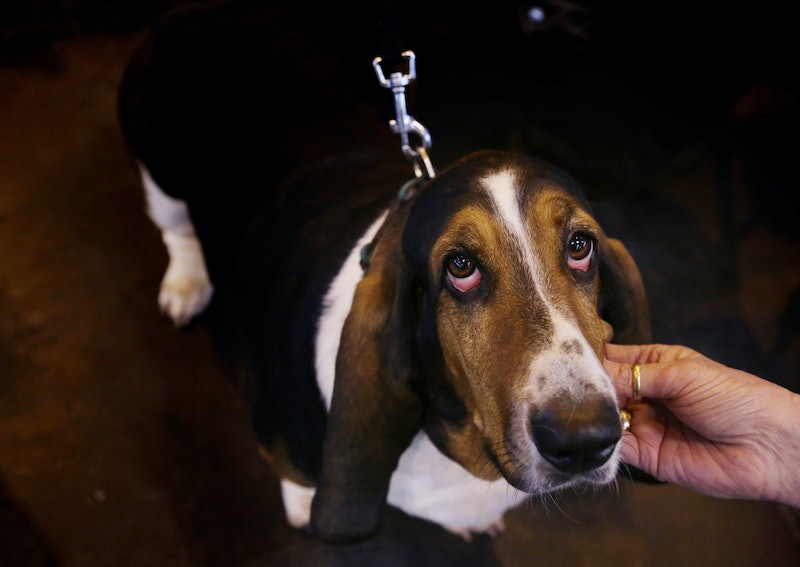 In case you needed even more proof that dogs are the purest, most wonderful creatures on this earth, look no further than this beautiful story of a dog who rescued another dog who was trapped in a ditch, by vigilantly standing by the side of it for an entire week until authorities came to save them. You can't make this stuff up, people.

It all started in Vashon, Wash., earlier this month. Two dogs, Tillie the Golden Retriever and Phoebe the Basset Hound, were out for a regular walk. When the pair failed to return home, their worried owner contacted Vashon Island Pet Protectors, an organization that works to protect and improve the lives of pets within their community. The Pet Protectors took to Facebook, posting a notice about the missing dogs and seeking any information on their whereabouts.

Though locals searched far and wide for a week, no one knew that Phoebe had fallen into an old cistern located in a heavily wooded area. She was trapped in this deep ditch with absolutely no means of escape. Things certainly would have looked bleak for the poor pooch, had she not had a faithful friend on her side.

Tillie stayed with Phoebe the entire duration of Phoebe's entrapment. What's even more amazing is that Tillie actively sought help, and Phoebe certainly wouldn't have been rescued without her efforts.

Though Tillie could have found her way home to her owner, she wouldn't venture too far from her companion and risk anything happening to her.

A week after the pair was initially reported missing, a Vashon farmer reported spotting a "reddish" dog on their property. They said the dog (aka Tillie) would come up to them and then hurry back into a nearby ravine. It appeared as though Tillie was trying to get someone to follow her.

The farmer contacted Vashon Island Pet Protectors, who took a chance and followed Tillie into the ravine. What they found was a truly moving sight: Tillie, sitting near the edge of the cistern, refusing to move an inch until searchers came close enough to spot the both of them.

An even greater relief was that both Tillie and Phoebe were healthy when found. They both had managed to remain hydrated from rainwater.

I hope Tillie and Phoebe are out there somewhere enjoying a T-bone steaks and belly rubs. These are some seriously inspirational pups and I would be proud to ever play fetch with someone so honorable.

So now only one question remains: when will the Disney adaptation come out?