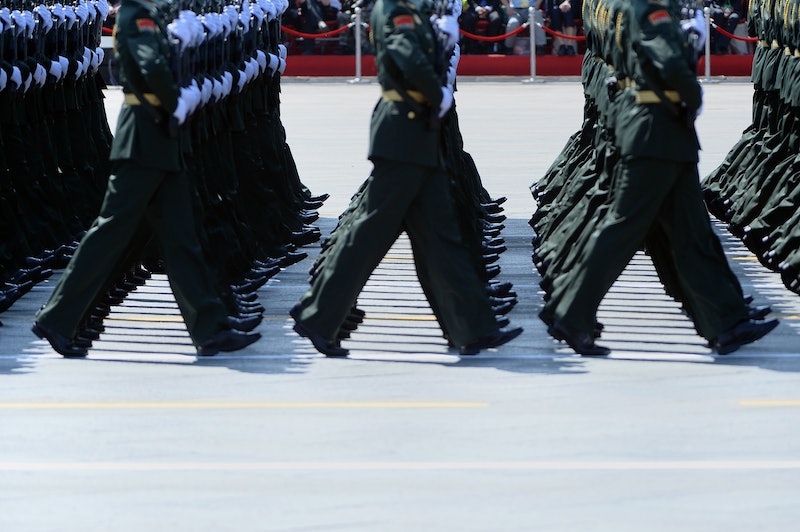 Early Saturday morning (local time), after years of post-war pacifism, Japanese lawmakers voted to expand its military presence overseas, approving several pieces of legislation that would expand the country's combat abilities beyond its current humanitarian role in the global community. The Japan Times reported that the new changes, which were passed 148-90, would take effect over a period of some six months. The move, meant to strengthen Japan's military alliance with the United States, has already elicited vehement outcry from the public, which, for the most part opposes the measure wholeheartedly.

"Japan is a country which pledged not to fight a war again," IT engineer Hidenori Shida, 65, told CNN on Friday. "We have killed no one in the [past] 70 years — this bill is unforgivable."

The public's aggressive opposition to the legislation is not a surprise to lawmakers, who have been battling it out with pacifist protesters for years. For Prime Minister Shinzo Abe, who has been fighting for the changes since 2013, Saturday's vote was of particular significance, despite the fact that he and the Upper House representatives faced an uphill battle on the popularity front.

"Japan is like the 42-year-old kid still living in the basement of the United States," Asia strategist Keith Henry told CNN. "[Now], Japan is moving out of the house of the U.S. that was essentially built after World War II, but there are risks involved in protecting one's national self interests."

One of those risks seems to be the overall unprepared mentality that many protesters say is pervasive among Japanese troops. Sending soldiers into battle who are inexperienced in relation to their international counterparts, they argue, could be devastating.

"I'm worried that my son will be involved in a U.S. war," one Ground Self-Defense Force member's father told The Japan Times at a protest on Friday evening. "[The government] does not seem to have thought about the [SDF] personnel, and is only putting priority on enacting [the legislation]."

Many civilians say that the vote wasn't just concerning, but unconstitutional.

"I find it problematic to forcibly go ahead even though a lot of people say the bills are unconstitutional," 28-year-old Yukiko Take told the paper. "I'm afraid we’ll get involved in wars little by little."

"It's a very bad move," added one female student, who asked to remain anonymous, in a comment to Bustle on Friday. "Japan will find excuses to go to war ... using the Self-Defense troops instead of [letting them help] those of us in natural disasters — and I don't buy the excuse that the troops will be used to save the Japanese living abroad." She claimed that student Internet accounts were being monitored, and that the Security Office and the local police had supposedly been taping protesters and dissenters as well.

The Diet (Japanese Assembly) itself got physical this week, after opposition lawmakers attempted to steal away chairman Yoshitada Konoike's microphone following hours of tense debate, in order to prevent him from calling a vote on the matter; The AFP reported that members then began climbing over one another, eventually resulting in an all-out shoving-match on the Assembly floor.

Is the ruling party listening to the voices of the public? You can do whatever you want to do because you have a majority — is that what you think?

Japan's post-World War II constitution has previously barred the country from engaging in any military force in international conflicts, except in cases of self-defense. Prime Minister Abe, however, has pushed for more allowance on that front, given North Korea's recent warning that the country was ready to utilize its nuclear arsenal "at any time."

Under the new parameters, say proponents of the measure, the Japanese military will be able to lend tactical assistance to regional allies, like South Korea. According to the BBC, it would also give the country the power to shoot down any missiles headed to the United States, as well as the ability to provide armed support during hostage missions.

But not everyone is convinced that the official language won't be interpreted more aggressively in the future.

"They are using democratic institutions and processes, but the way he uses them is not terribly democratic," claimed Keio University professor Yoshihide Soeya, in a statement to The Guardian on Saturday.

Although proponents of the bill say there is merit in asking for the Japanese military to have a more functional role in the current global fight against extremism and nuclear threats, at least one group is using past experience to defend its opposition.