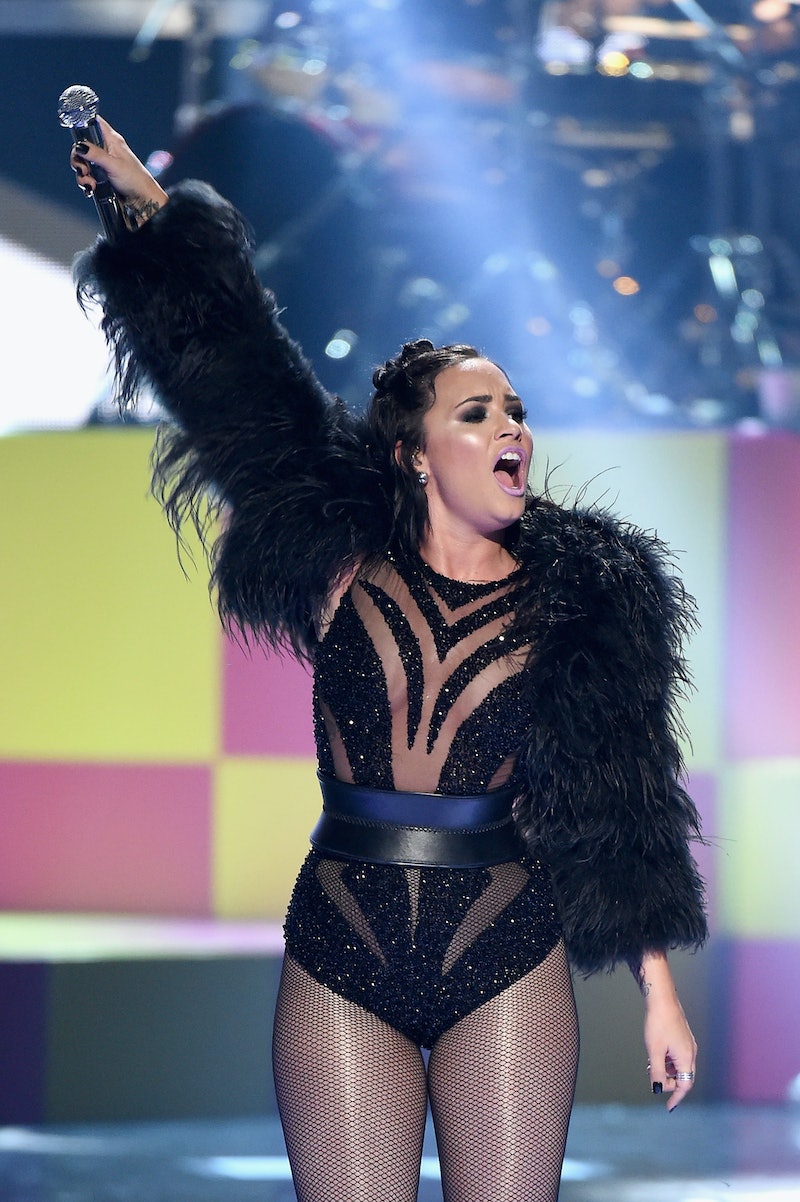 New album, new style — that's pretty much the deal and the standard operating procedure for most fashionable pop starlets, like Lady Gaga, Katy Perry, Rihanna, all of whom reinvent themselves and change their looks rather dramatically from album cycle to album cycle. Demi Lovato attended the iHeart Radio Festival and resurrected her all-black rocker chic look, both for her red carpet appearance and her performance.

Lovato has been showing a sexier, more multi-colored look that is decidedly "more pop, less rock" since she began promoting her smash single "Cool for the Summer" and her new album, Confident. The singer and actress has pretty much ditched her usual all-black uniform, which often featured leather, studs, and heels in some combo or variation.

But she returned to familiar and chic monochromatic form at the event in Las Vegas and she looked fabulous. It's never too goth or boring when Lovato dons black from head to toe!

Honestly, Lovato's onstage outfit, consisting of thigh high boots, fishnets, a bodysuit, and a furry shrug, sorta reminded me of Miley Cyrus' iHeart Radio outfit a few years back. Sure, Cyrus' ensemble was more risque, was see-through, and white, but it was in the same spirit as Lovato's.

Lovato was infinitely sexy in all black.

She owned her curves.

No wonder Lovato named her new album Confident. She oozes that quality no matter what she wears.

Love her, mean it.

Now about that Cyrus comparison?

Similar, but different, right? The performance outfits had the same vibe.

As for Lovato on the red carpet of the 2015 iHeart Radio Festival? Scorching!

Her dress had a corset vibe and it was made sexier when pared with caged heels.

Her mini buns were adorbs.

I am so reminded of Lovato of 2013, when black was pretty much the only color she wore.

Just black was her norm.

Lovato always killed it when she did all black.

D. Lovato circa 2013 still looks classic and in style. Her pops of color came from her hair.

Few celebs do black ensembles as well as Lovato (and her stylist). I would be stoked if she reverted to her former signature all of the time. Not gonna lie!

More like this
Harry Styles Went Shirtless In A Striped Jumpsuit At The Grammys
By El Hunt
Beyoncé Wore A Golden Sheer Gown At Her VIP Dubai Concert
By Sam Ramsden
'Love Island's Will Got A Farm Animal Manicure & It's *Adorable*
By Sam Ramsden
Megan Fox & Machine Gun Kelly Are A Masterclass In Emo Couple Dressing
By Avery Matera and Allie Fasanella
Get Even More From Bustle — Sign Up For The Newsletter
From hair trends to relationship advice, our daily newsletter has everything you need to sound like a person who’s on TikTok, even if you aren’t.