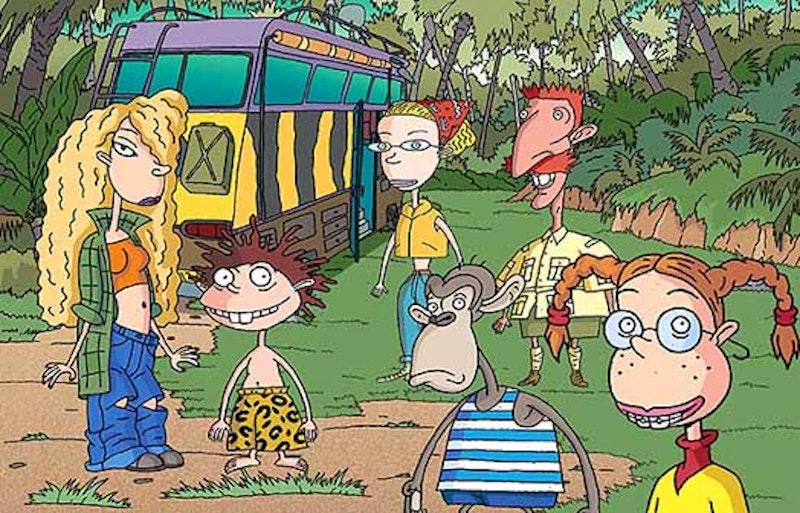 I am a firm believer that no one is ever too old for cartoons, and that goes double for Nickelodeon cartoons, or Nick Toons, as they are better known to '90s kids everywhere. Everyone I knew as a kid watched all the Nick Toons, at least they watched all the ones their parents didn't ban — in my experience, parents really didn't like Ren & Stimpy. Even though the entire '90s lineup was flawless, everyone had a favorite Nick Toon. Now that I'm older, I cannot help but think your favorite Nick Toon says a lot about who you are as a person.

The characters at the center of Rugrats, Rocko's Modern Life , and The Wild Thornberrys were all different. They led extremely different lives and got into unique adventures. Each show had its own personality, and the personality of the show lines up with the personality of the watcher, at least to some extent. You know that old saying about you are what you eat? Well that goes double for what you watch, especially in your formative years.

Are you ready to discover what your undying loyalty to Doug really means? Then read on and allow your '90s cartoon favorite to tell you a little about the adult you are today.

You invented the term squad goals. As a kid you were always the leader of the pack and in true Tommy Pickles fashion you have translated those leadership skills to your adult life. Taylor Swift is your role model, you never procrastinate, and you think weekends were invented to take long and winding road trips with your BFFs.

Your taste for the macabre developed early. Aaahh!! Real Monsters was just a gateway drug to harder pop culture obsessions down the line. These days you cannot imagine missing a midnight screening of the latest Marvel movie, your Harry Potter book collection is your most prized possession, Tumblr is your home away from home, and you ended up in a creative field where your imagination could run as free as it always wanted to.

Super responsible and laid back, you are happy to have the whole growing up thing behind you. Secretly, you knew you were more of a Disney kid than a Nick kid growing up, and Doug provided you with a safe space to learn about the trials of middle school in peace. Now you have a stable life that all of your friends secretly envy, and more importantly your very own dog. You are living the dream.

You either live in Portland or Austin, or you see them as the promised land. Being artistic and offbeat has always been your jam. You wouldn't be caught dead drinking a pumpkin spice latte, but you do have at least one tattoo.

Even as a kid you were a realist. No, beavers can't talk, but you understood their everyday triumphs and (more often) tragedies on a deep level. These days you care deeply about politics and the state of the world. You are a worrier by nature, but you are also big on actually getting stuff done. Without volunteering, arguing with your aunt about Donald Trump on Facebook, and indulging in Seinfeld reruns, you would have way too much pent up energy to contemplate.

A sensitive urbanite, you grew up to be socially conscious in all the right ways. You shop local, work local, grow local — a city is a microcosm of the world and you see no reason why you should ever leave yours. Going against every city dweller stereotype there is, you are an almost abnormally happy person.

You see the indoors as the enemy of learning and fun. Nothing makes you happier than camping, kayaking, hanging out in the woods, or traveling. You lead a life of constant motion. Aside from National Geographic specials, The Wild Thornberries might actually be the last show you watched.

Your complicated relationship with your sibling has grown into one of the defining relationships of your life. You and your sibling are best friends who tell each other everything these days, and you can't imagine a time when you bickered nonstop.

You were a super serious, somewhat jaded kid, but you've learned to take life less seriously these days. Sure, your life isn't an episode of Friends, but Rocko prepared you for the worst case scenario of adulthood and you landed miles away from that. You are a playful person who enjoys cereal and Saturday morning cartoons more now than you ever did as a kid.

Did your favorite cartoon match up with your adult personality or did this list just make you want to have an old school Nick marathon? Either way, I'm counting it as a win.

More like this
The 'Kenan & Kel' Reunion On 'SNL' Took A Dramatic Turn, Thanks To Keke Palmer
By Brad Witter
The First Trailer For 'That '90s Show' Includes So Many Nods To The Original Series
By Jack Irvin, Alyssa Lapid and Grace Wehniainen
Twitter Is Flummoxed By Lindsay Lohan’s “Pilk & Cookies” Pepsi Christmas Ad
By Shahed Ezaydi
Lily Collins Has Pretty Strong Opinions About Being A ‘Nepo Baby’
By Darshita Goyal
Get Even More From Bustle — Sign Up For The Newsletter