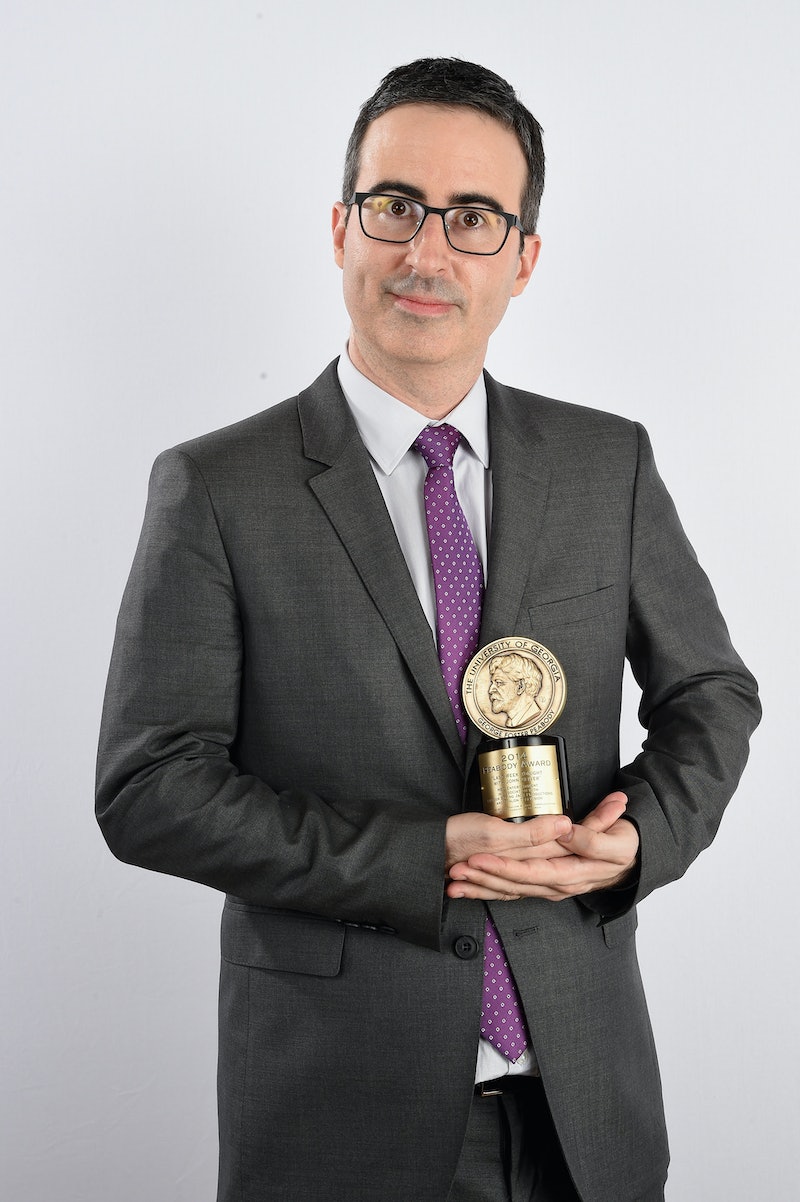 John Oliver is known for his highly informed, hilarious rants. The HBO host lampoons public figures and highlights major issues with incredible bravado that has attracted viewers from all over the world. It's what has made him an iconic figure just two seasons into his wildly popular show Last Week Tonight. Although the program is currently on a brief break and will resume on Sunday, Sept. 27, there's a full 51 episodes to look back at to tide you over. If you're so busy that you can't make it through a full season, much less an episode, John Oliver's best one-liners are more than enough to carry you through until the next show.

Oliver got his first big break in shorter segments, reporting on The Daily Show as their Senior British Correspondent starting in 2006. His presence in the writer's room and on the broadcast itself proved invaluable, landing him a guest hosting position during Jon Stewart's vacation in the summer of 2013. It only makes sense that some of Oliver's best moments would come in short bursts rather than in longer segments. The comedian has also spent years honing and refining his style as a stand-up comedian so if you're looking for even more one-liners, there's a whole other treasure trove of material.

According to a study in New Orleans that the host highlighted, public defenders are so overwhelmed by a downright dizzying number of cases that they can only devote seven minutes to each client. The HBO host took over two caseloads' worth of time to illustrate the plight of public defenders in the U.S. Oliver summed up the impossibly small amount of time by illustrating what he'd do if given the same constraints for his job. Oliver said:

If I only had seven minutes to prepare this show, I definitely would not be talking about public defenders right now; I'd be desperately trying to fill time by listing the Muppets in order of fuckability.

For once, Oliver had the rare opportunity to commend a GOP candidate on his stance on gay marriage. Ohio Gov. John Kasich stated that he'd attended a gay wedding and received applause for his statements during the first Republican debate. Oliver then launched into an impassioned rant on all the ways the LGBT community is still being discriminated against despite the fact that the issue is one of equality, not of exceptionalism. Oliver highlights it perfectly with this one-liner:

We're not creating lesbians-only sections in airplanes, or putting up signs at Six Flags saying, "You must be this gay to go on this ride."

There are very few standards in sex education around the country, to the point that some schools only offer scare tactics and messages of abstinence not even based in fact, while others are a bit more realistic. Oliver perfectly highlighted this marked difference with footage from two different videos with the same actors and motif. One featured the options you have when deciding to become sexually active while the other is almost slut-shaming in its approach. This is where his most brilliant one-liner comes from. Oliver had this to say about the second message's ineffectiveness:

Sex is like boxing: If both people didn't fully agree to participate, one of them is committing a crime.

One of the biggest issues facing transgender people in the limelight or really any trans person being interviewed is the alarming lack of tact many hosts and journalists have when asking them questions. Oliver showed clips of everyone from well-regarded media figures like Larry King and Barbara Walters to daytime talk show host Wendy Williams all asking inappropriate questions about their transgender guests' genitalia. Oliver had this to say about the behavior:

It is no more okay to ask transgender people about their sex organs than it is okay to ask Jimmy Carter whether or not he's circumcised.

The issue of online harassment is one that affects Oliver as a celebrity, which he brilliantly talked about at the beginning of this segment. The larger point, however, is how much such bullying is targeted toward women and how little is being done when it comes to combating it. Oliver placed specific focus on law enforcement's ineptness when it comes to responding to cases of online harassment. He gave this example of their lack of understanding:

If someone tried to drown you, you don't want the police to say, "I get the murder attempt but what's the water thing you're bringing up? Is it like air, but a bit more choke-y?"

Torture is still an issue in this country, as is the American public's perception of it. When polled, a majority indicated they felt that such tactics were effective. Oliver proved that such brutal interrogation techniques do little to help, showing a clip of committee chairperson Dianne Feinstein explicitly stating that using torture was ineffective. The HBO host summed up the country's collective perceptions hilariously, however. Oliver said:

Kicking off this segment, Oliver showed the sad statistic that the U.S. and Papua New Guinea are the only developed countries that don't offer paid maternity leave. He delved even further into the bizarre ways in which mothers are forced to mitigate that difficulty by using sick leave or vacation hours instead of actual maternity leave to make sure they still have income coming in lest they risk losing their jobs or putting themselves under financial duress. Likening it to taking a long weekend without telling your boss, Oliver had this to say:

It turns out every time we should've gotten mad at the IRS for something, we rightfully should've been blaming Congress because they're the ones allowing for changes to tax laws and even the amount of taxes citizens must pay. Oliver pointed out that it's simply ridiculous to blame the IRS for its failings because its budget has been slashed by — you guessed it — Congress, and is really rather helpless. Oliver said:

Blaming the IRS because you hate paying your taxes is a bit like slapping your checkout clerk because the price of eggs has gone up — it's not her fault.

More like this
Kit Connor Speaks Out On “Shocking” Lack Of Bisexual Representation
By Sam Ramsden
MOBO Awards Found Kanya King On The Woman Whose Grit & Determination Spur Her On
By Kanya King
Amanda Gorman Shared A Powerful Message On Meghan Markle’s Penultimate Podcast
By Darshita Goyal
The David Beckham Qatar Controversy, Explained
By Sophie McEvoy
Get Even More From Bustle — Sign Up For The Newsletter