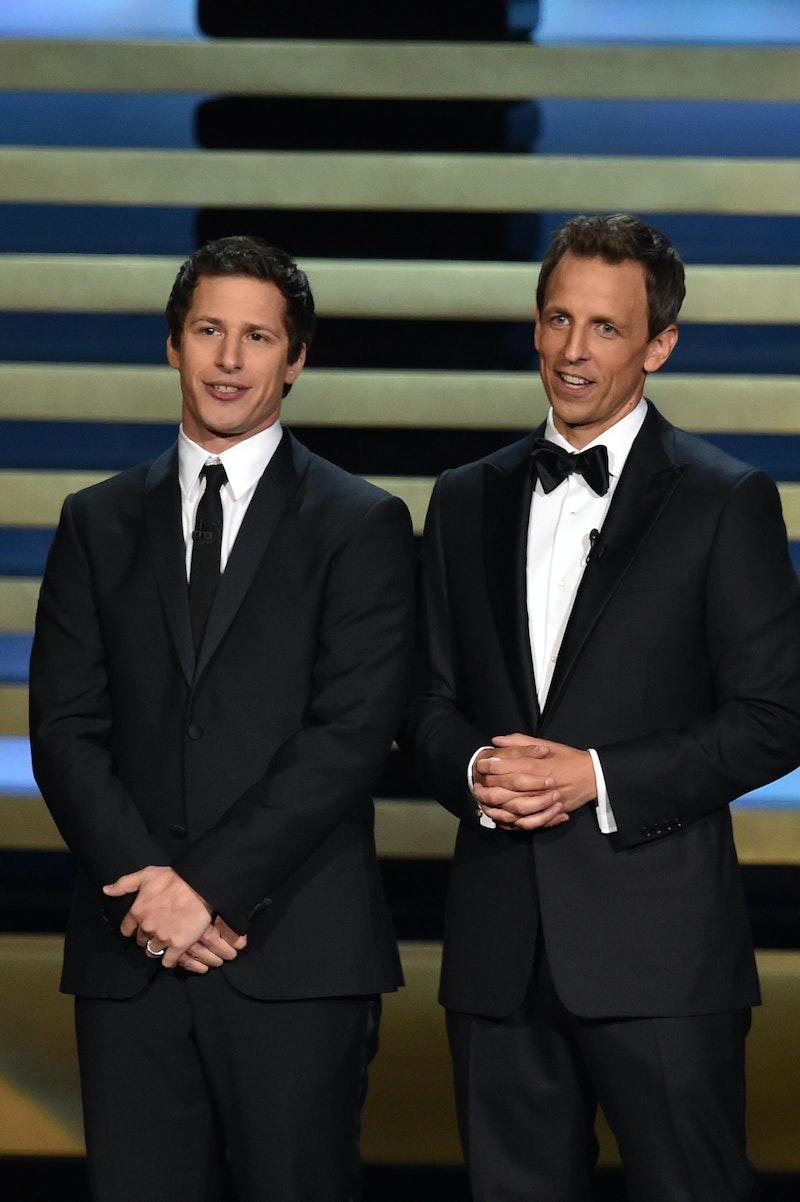 One hilarious Emmy Awards host is great, but an Emmy host and one of his Saturday Night Live friends making a joke about their old boss together? That's just the best. On Sunday night's telecast of the 2015 Emmy Awards, host Andy Samberg and friend/former SNL co-worker Seth Meyers decided to come together to honor their SNL boss, the man who gave them both their start, Lorne Michaels. They did so in the best, most perfect way possible: with mockery. Samberg and Meyers gave Michaels a "World's Best Boss" mug. The two stars prefaced their jokes with some wonderful information about Michaels. It turns out that 40 people who had been nominated for Emmys on Sunday night owed their starts to Lorne Michaels, proving that he is clearly one of the best bosses around, and Meyers and Samberg wanted to show just that by providing Michaels with a present that said just that.

The comedians let Michaels (and the audience) know that all of the people nominated for Emmys who he had helped gain fame had pooled their money together and bought him an expensive, incredible gift. Of course, we all probably knew that as soon as Samberg and Meyers revealed this, that there was no way this gift was actually going to be anything special or serious. Of course it wasn't: it was a mug that said "World's Best Boss," just like the one Michael Scott used to have on his desk on The Office.

Meyers then went on to ask Samberg why the gift wasn't spinning on its podium, and it turns out that the reason was because the people who chipped in for the gift ran out of money, so Samberg had to spin the mug himself. From there, Meyers revealed the mug was actually an award that needed to be given out, but he assured Samberg that it was only a formality and that Michaels was bound to win it, anyway. But when Meyers opened the envelope, it turns out Shonda Rhimes actually won the award as World's Best Boss, with Lee Daniels a close second. Sorry, Lorne.

Both comedians then revealed that Michaels actually did win an Emmy at the Creative Arts Emmy Awards ceremony that occurred earlier in the week, but the joke landed and Michaels seemed to enjoy the dig at himself. Yet the joke wasn't just great for its humor; it's fantastic that the "real" World's Best Boss winner was a woman of color, with a man of color as the runner up. With a night full of jokes like these, Samberg really killed it from start to finish as Emmys host.