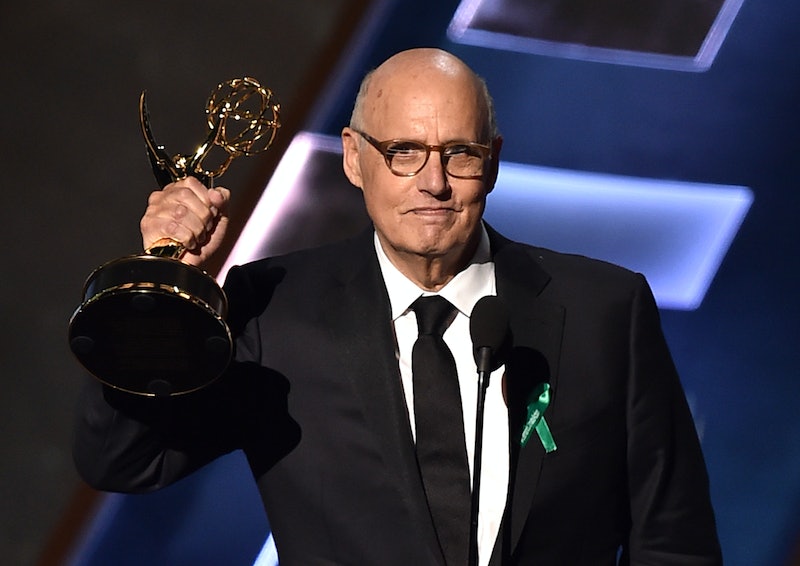 As Jeffrey Tambor accepted his award for Lead Actor in a Drama Series during the 2015 Emmys, I was distracted by a little something on his lapel. Jeffrey Tambor's green ribbon at the 2015 Emmy Awards stuck out against his gorgeous black suit, but I'm thinking that was the point. Tambor's ribbon is championing for action on climate change, and if you looked closely, you'd see that the ribbon reads, "#DemandClimateChange." Tambor wasn't the only star wearing the pin though. Actress Gaby Hoffman, comedian Brad Hall, and Game of Thrones author George R.R Martin were just some of the attendees rocking the ribbons... so are they connected to a campaign?

According to the Hollywood Reporter, the ribbons are in support of President Obama's Clean Power Plan that supports setting standards on carbon pollution for power plants. The plan aims to reduce carbon emissions by 32 percent between 2015 and 2032. While this may not sound like much for the person not engaged for the fight for climate change, the plan actually has quite the impact on the everyday American as well. The Clean Power Plan's site claims that it would cut out $85 a year in power bills for households in the states and would have a multitude of health benefits. The plan could allegedly prevent 90,000 child asthma attacks and 1,700 non-fatal heart attacks, according to the site. With facts like this, it's not hard to understand why the stars are sporting the ribbons.

You can see #DemandClimateChange on Tambor's ribbon if you look closely.

You can also spot the ribbon on Tambor's co-star Gaby Hoffmann.

While last year the green ribbons were in support of mental health awareness, the cause this year has shifted and what a worthy cause for the stars to support! If you're interested in supporting the Clean Power Plan, you can head over to the National Resource Defense Council's petition, and if you want to learn more about the Clean Power Plan, check out the White House's fantastic video.

More like this
42 Black Owned Fashion & Beauty Brands To Support Today & Always
By Mekita Rivas, Shea Simmons, Kui Mwai and Dominique Norman
How Lady Gaga & Adele Are Closer To The EGOT All Of A Sudden
By Jake Viswanath
'The Capture' Is Finally Back – & S2 Looks Tense AF
By Sophie McEvoy and El Hunt
‘Stranger Things’ Stan Megan Thee Stallion Grilled Natalia Dyer About Nancy & Steve
By Brad Witter
Get Even More From Bustle — Sign Up For The Newsletter