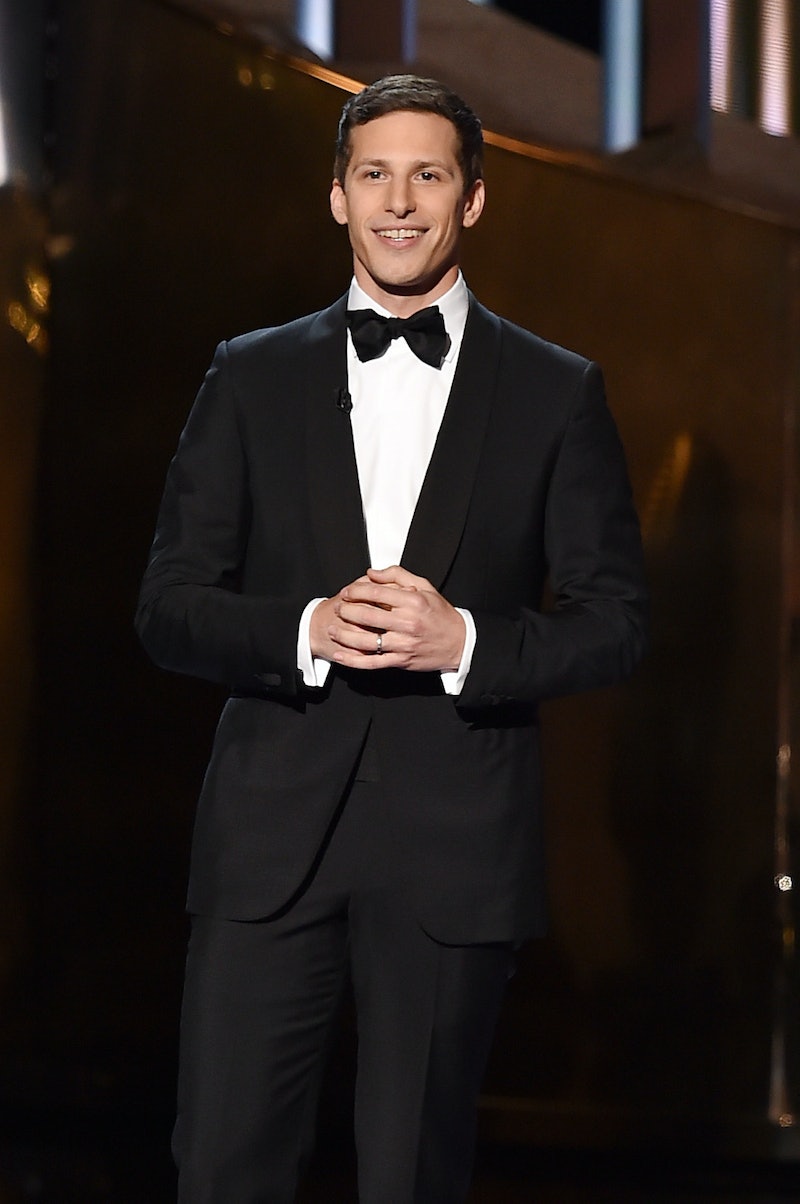 When the beloved AMC drama series Mad Men ended, the now famous ending had ad exec Don Draper (Jon Hamm) dreaming up the classic "I'd Like To Buy The World A Coke" commercial. On Sunday night, Emmys host Andy Samberg wanted to take that to a whole other level: Samberg parodied Mad Men in a sketch during the Emmys by featuring himself at the California retreat we first saw Don at during the finale, before singing "I'd Like To Give The World An Emmy." It was a hilarious and touching salute to Mad Men's fitting ending.

The taped sketch began with Samberg meditating at a coastal retreat, in a shot much like the Mad Men finale. "Fun show so far," he narrates while in deep thought. "I wonder if anyone noticed that I took off for a few hours to meditate." He continues to ruminate about it's great that so many people are winning and going home happy, but even more folks are going home empty-handed and he wishes he could do something for them. And this is when Samberg gets his brilliant idea — he and retreat begin singing, a la the Coke commercial and Mad Men, "I'd Like To Give The World An Emmy."

Why? "So we can all be free. And everyone at the retreat really does have an Emmy in their hands — even the Andy Samberg-in-wig character. (Someone should invite Ricky Gervais, because he really wants another Emmy.)

But sadly, it's not a perfect world. When Samberg-in-a-wig tosses an Emmy to Parks And Recreation actor Jim O'Heir, well — let's just say he's got the same luck as his Parks And Recreation character Jerry/Gary. The Emmy impales him, with the sketch declaring that "Emmys can kill." Yikes. Looks like Emmys are dangerous?

Watch the full sketch below.

More like this
Everything To Know About Netflix’s 'Never Have I Ever' Season 4
By Jack Irvin and Gabrielle Bondi
Meet The New Team Of Residents Joining 'Grey's Anatomy' In Season 19
By Brad Witter and Sophia Moore
An Ultimate Guide To The Music Of 'Rap Sh!t'
By Brad Witter
Josh Peck Shows Love To Jennette McCurdy After Her Shocking 'iCarly' Revelations
By Radhika Menon
Get Even More From Bustle — Sign Up For The Newsletter