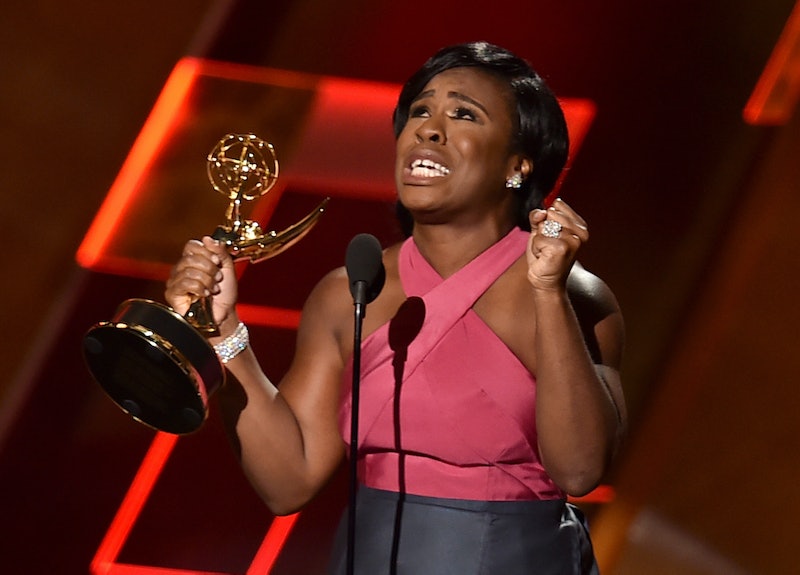 I was really rooting for Uzo Aduba on Sunday at the 2015 Emmys Awards. The actress was nominated for Supporting Actress in a Drama Series for her work on Orange is the New Black as Suzanne "Crazy Eyes" Warren, and, with respect to Joanne Froggatt, Lena Headey, Christina Hendricks, Emily Clarke, and Christine Baranski, Uzo Aduba deserved to win the Emmy award hands down. She took Suzanne from being a comedic and at times terrifying character, and transformed her with so much emotional depth that there are entire sections of Orange Is The New Black fans that refuse to call her "Crazy Eyes" out of respect for the moment when Suzanne revealed that she had no idea why the other inmates called her that. So, when Aduba took to the stage to accept her award, I should have known she was going to break my heart with how happy I was for her. In fact, just try getting through the transcript of Uzo Aduba's 2015 Emmys speech without sobbing.

The emotional moment really should not have come as a surprise to the audience considering how we were already well-aware of exactly how good Aduba is at playing on the heartstrings of her audience. But what really makes this moment so special is that it was entirely authentic, entirely genuine, and entirely unscripted — sure, she may have had the speech ready just in case, but it was clear from the way she burst into tears in the audience that Aduba did not actually expect to win, and was so thrilled and overwhelmed to actually be recognized for her considerable talents. All in all, it was pretty much the best moment of the night, and I'll be reading that speech over and over again every time I need to have a good cry.