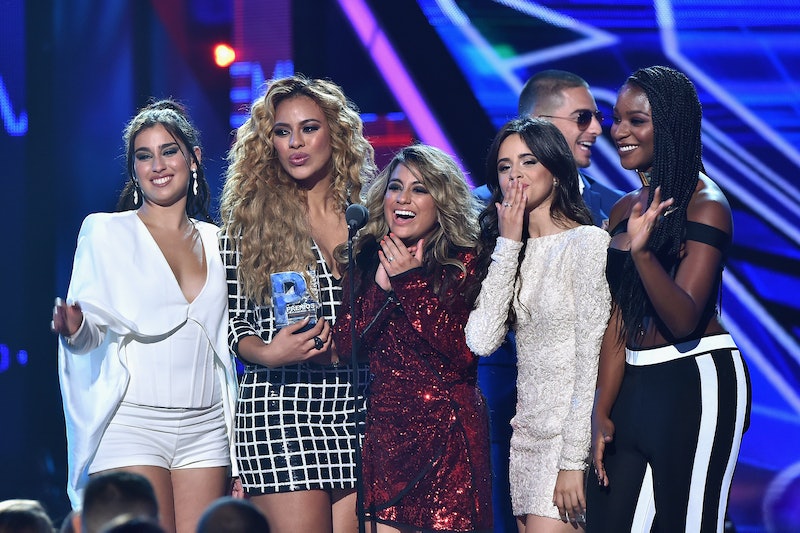 I hope you're sitting down, Harmonizers: Fifth Harmony are working on a new album. WHAT? Yes, it's true: Group member Camila Cabello told Billboard at the iHeartRadio Music Festival over the weekend that the band would begin recording their next project sometime this week. This is not a drill, people! New music is on the way. 5H's debut LP, Reflection , may be less than a year old, but personally, I'm happy to hear that they're "movin' on." Fifth Harmony have always had a dedicated fan base, but now, they've captured the attention of the general public as well with their hit single, "Worth It." Therefore, I think it's wise for them to "strike while the iron is hot" and put out some fresh material ASAP.

Cabello revealed during her aforementioned Billboard interview that the group is "really, really excited" about a few of the demo tracks that have been submitted by songwriters and producers for their upcoming sophomore release. "I heard one the other day that I was like, 'That is probably my favorite song that I've heard that we're going to record,'" the 18-year-old singer said. Well, that certainly sounds promising! Here's everything else we know about Fifth Harmony's new album so far:

Last Friday, songwriter and producer Julian Bunetta — who's worked with Fifth Harmony in the past on tracks like "Don't Wanna Dance Alone" and "Reflection" — asked rapper T-Pain on Twitter if he'd like to "write a tune" with him "for a girl group." Interesting. As far as I know, Fifth Harmony are the only "girl group" (I don't like that term, for the record) Bunetta's ever teamed up with, so I think it's likely he's referring to them. "Don't Wanna Dance Alone" and "Reflection" are two of my favorite 5H songs, so I'm pretty pumped about this possibility.

(If you'd like to hear more of Bunetta's work, check out One Direction's last album, Four.)

They May Be Collaborating With A Major Hit-Maker (Again)

Songwriter Savan Kotecha is a big deal. Huge! He's written more hit singles than you can shake a stick at (including The Weeknd's latest smash, "Can't Feel My Face") and I think he may be collaborating with Fifth Harmony once again on their new album. (He previously co-wrote the title track for their Better Together EP.) How did I reach that conclusion? Well, when Cabello wished the hit-maker a happy birthday on Twitter recently, he replied that he'd see her "soon." Suspicious! In my opinion, Kotecha is one of the most talented artists in the industry today, so I'm all about him joining forces with the quintet.

They're Also Working With Someone New

On Sunday, Latin Grammy Award–winning musician Claudia Brant tweeted a couple of pictures of herself in the studio with Fifth Harmony. The band has never worked with the 47-year-old songwriter and producer before, but she boasts an impressive résumé that includes big names like Ricky Martin, Enrique Iglesias, and Santana. I'm really glad that 5H are branching out and working with new collaborators, as well. I can't wait to hear what they create with Brant.

That's everything we know so far! I'll be sure to keep you updated as we find out more details.