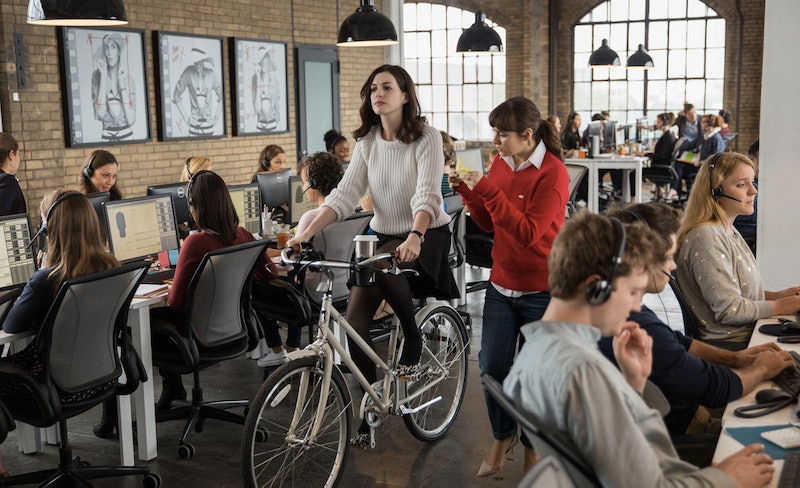 Anne Hathaway is in charge in the new Nancy Meyers workplace comedy The Intern , opening Sept. 25. As founder and CEO of a booming internet fashion start-up called About The Fit, Hathaway’s Jules Ostin is an all-too rare character in film: a female business leader who knows what’s she’s doing and also is not a monster. (For the record, Meyers loathes the “mean lady boss” trope.) When her company begins a senior internship program, Jules bonds with Ben Whittaker (Robert De Niro), nontraditional circumstances and age gap be damned. The trailer hints at issues between Jules and the company’s investors, who love the idea of harnessing new minds to come up with new ideas but not to maintain a growing business. Unfortunately, the company from The Intern isn't real, but it gets a different honor: One of a handful of awesome businesses made up just for Tinsel Town.

Jules' start-up in The Intern is not based directly on any specific online retailer. The movie does, however, take inspiration from operations that started small and became massively successful seemingly overnight. (“Think Zappos,” wrote The New York Times.) The loft office also looks like a pretty dope place to work, especially since it comes with exposed brick walls and coffee breaks with Robert De Niro.

I can add The Intern to the list of comedies that give me serious job envy. These are the movie workplaces I would wear my laptop out applying to, if only they really existed.

How may I service you? The gang doesn't really do a lot of work over at Empire Records. If every day were like Rex Manning Day, then toiling at that music mecca really means fighting over the store playlist, polishing off pot brownies, dancing in the break room, and holding the occasional fake funeral.

Working at Camp Firewood would also involve time warping back to the early '80s, and that's a job requirement I can really get behind.

Sure, the old Jenna Rink's shady dealings with their rival were about to get the fashion and lifestyle magazine shut down. But Sparkle doesn't have "Thriller" dance parties, integrity, or certified hottie photographer Matt Flamhaff on the payroll, so guess who really wins.

4. The Shop Around The Corner In You've Got Mail

Even with the shadow of Fox Books looming over the family-owned store, story hours are just as magical. The Shop Around The Corner has all the warmth and neighborhood status that the super-store is missing, plus Meg Ryan at peak Meg Ryan-ness.

I would get fired for eating all of the things, but it would be nice while it lasted.

Again: eating all the things. A waitressing gig at Joe's Pie Diner comes with taste-testing all of Jenna's pastry creations and a membership in a small but powerful sisterhood. Sign me right up.

Why can't real-life work be like these movie jobs? Society would be so much more productive.

More like this
What Is Brad Pitt’s Net Worth? The Bullet Train Star Now Makes 8 Figures Per Film
By Hugh McIntyre
Revisit 1992’s 'A League Of Their Own Cast' Photos After The New TV Series
By Grace Wehniainen
At 28, Lesley Manville Was Acting, Picketing, & Singing Kate Bush Songs
By Olivia-Anne Cleary
Reese Witherspoon Gave Fans Hope For 'Legally Blonde 3' After This Surprising Movie Inspired Her
By Jake Viswanath
Get Even More From Bustle — Sign Up For The Newsletter