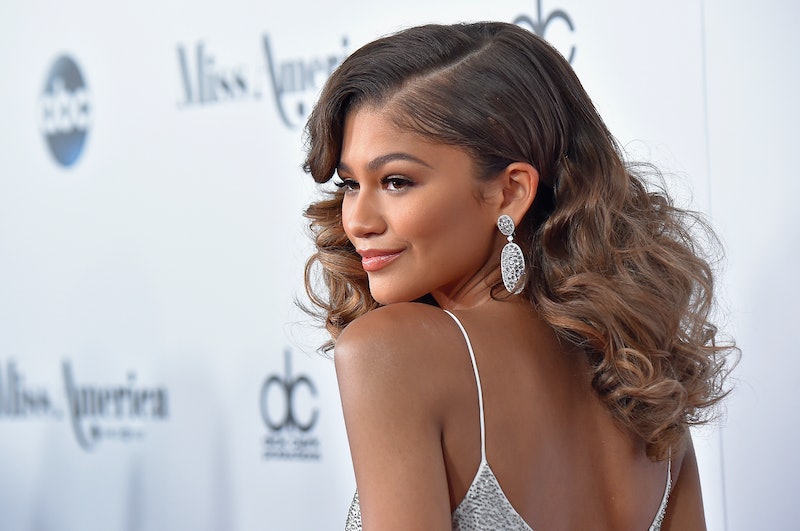 We need to talk about the fact that Zendaya Coleman is being made into a Barbie doll. And I don't mean that she is getting all glammed up like a Barbie doll. I mean Mattel is literally modeling a Barbie after the actress-singer, which is some just seriously straight-up incredible news. At 19, Zendaya has already made a name for herself as a role model — particularly after her eloquent remarks in response to Giuliana Rancic's comments about her Oscars hair — and is the perfect public figure to be represented as an iconic doll for a whole new generation of kids.

Zendaya, who has partnered with Barbie to encourage young girls to "Raise Their Voice," spoke to Yahoo! about Mattel's expanding diversity. She said,

When I was little, I didn't have [a Barbie doll] that looked like me, so I couldn't connect with her in that way. But getting to visit the Mattel offices and see Barbie's vision for the future… it was really cool. I was able to see how they plan to diversify, broadening the horizons and the image of Barbie, and make it more, you know, open. I left the office feeling it was definitely something I wanted to be a part of.

And the doll is definitely something that fans will want to be a part of, since there's no question that the Zendaya Barbie — on display at Zendaya's Rock n' Royals Concert Experience in L.A. on Sept. 26 — is set to be super empowering for a number of reasons.

1. The Barbie Will Rock Her Famous Dreadlocks

It's no coincidence that Mattel chose to dress up Zendaya Barbie in the same gown and hairstyle that the actress rocked at the 2015 Oscars. At the time, the Shake It Up star's dreadlocks became the center of controversy as Fashion Police host Giuliana Rancic made remarks about Zendaya's hair that some found to be racist. For her part, Zendaya's poised and mature-beyond-her-years response not only educated the world on important racial issues, it also elevated her status to role model.

2. The Doll Will Serve As A Role Model To Young Kids Everywhere

Not only will the Zendaya Barbie be biracial like the singer-actress herself, it will empower those — like herself — who grew up without dolls that they could relate to. "Graduating high school or doing something as little as posting my senior portrait is really inspiring to a lot of kids my age who might be having trouble getting through high school," the actress told Galore mag. "Hopefully, I'm showing people that if I can do it, they can do it."

She may have just turned 19, but she's already making serious waves in the fashion industry. This Barbie not only confirms that — it propels it.

And that's not going away any time soon. In fact, when she was asked if her honesty on social media ever affects her in a negative way, Zendaya — once again — got real. "I think it would be worse to post things or say things that are fake," she told Galore. "When people catch you not being the version of yourself you tried to portray, then people are like, ‘Who is this person?’ and I think that’s bad. I’d rather just be Zendaya the whole time and have no problems." Tell 'em, girl.

Remember the time that trolls took to social media to claim that her parents were "ugly" and instead of shutting them down with some, frankly, well-deserved hate, Zendaya took the classy route and made some seriously important points in the process? According to Us Weekly, the actress responded via Twitter:

First I'm gonna pray for you. While you're so concerned about what my parents look like, please know that these are two of the most selfless people in the world. They have chosen to spend their entire life, not worried about trivial things such as looks and insulting people's parents on Twitter, but instead became educators who have dedicated their lives to teaching, cultivating and filling young shallow mind. (One of the most important yet underpaid jobs we have). Please, log out, go to school, hug a teacher and read a textbook. And while you're at it, go look in the mirror and know that you too are beautiful, because such hateful things only stem from internal struggles. Bless you.