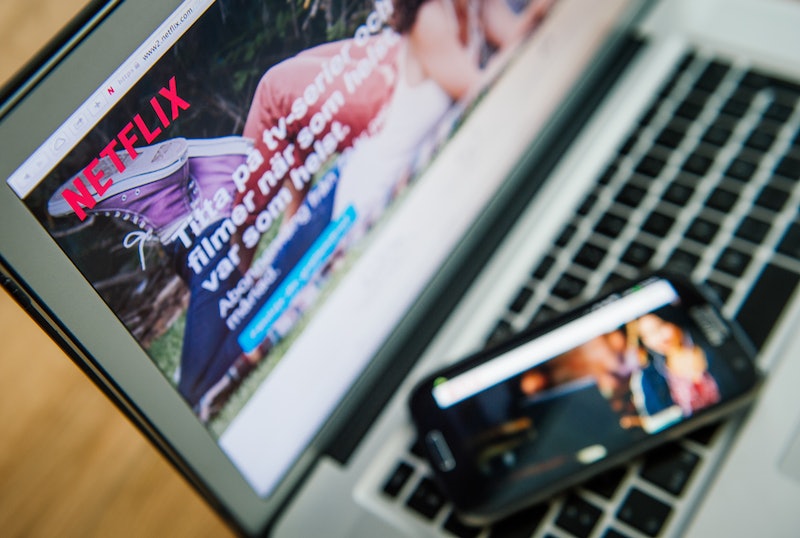 It's been a hot minute since the world caught onto to the meaning of that most sacred Millennial catchphrase, "Netflix and chill." And now, thanks to the new "Netflix and Chill" playlist from Spotify, there's no doubt in anyone's mind that we've all not-so-secretly been creating soundtracks to back the duplicitous invitation. ICYMI, should someone ask you to come hang out at their house and peruse their queue, they are basically just asking you to bone — it won't be long before they're asking you to peruse their queue (wink wink, nudge nudge).

Spotify has heard our call for an expertly curated playlist to not watch movies to, and they've answered in turn with an official "Netflix and Chill" playlist by pulling the top 20 songs from the thousands of individual "Netflix and Chill" playlists on the music streaming app. While it's true that some of the songs might make you think of awkward middle school dances with your first boyfriend (looking at you, "Pony" by Ginuwine circa 1996), who knew that streaming both Netflix and Spotify at the same time could make such a beautiful cacophony?

Given that the playlist is an aggregation of our own "Netflix and Chill" Spotify playlists, it's perhaps unsurprising that the mix is a little ueven; overall, it seems to be a curious amalgamation of current hip hop hits, songs from the 50 Shades of Grey soundtrack, and The Weeknd. If I had to sum it up in two words, they would be "sexistential crisis" — not necessarily a bad thing, but kind of hilarious all the same.

Naturally, this got me thinking: What do our "Netflix and Chill" playlists say about us? Based on the tracks that made their way to Spotify's list because we ourselves made them popular, here are a couple of safe assumptions. Which type of non-movie-watching soundtrack looks like your own?

You believe that Boyz II Men set the standard for boy bands, and no all-male group since has been able to match the libido-boosting properties of the original's smooth baritone. Expect TLC, Keith Sweat, and traces of your youth to pop up on this playlist. If it had a beeper code, it'd be 555 (I know you know what I'm talking about).

2. The Almost Too Hipster to Netflix and Chill

Aside from the occasional tracks by The Weeknd, every single artist on this playlist is a total mystery — perhaps even to you. It's not your fault, though... the music you like keeps going mainstream, so you must go in search of as-of-yet undiscovered voices. Happily, the lilting sounds of hipster music are, in fact, super sexy, and (bonus!) they pair just as well with a post-coital cup of dandelion root tea.

If you have more than one track from the 50 Shades soundtrack on your "Netflix and Chill" playlist, odds are good you are actually watching 50 Shades of Grey. You know how the old expression goes — if the ball gag fits... You've never met a set of fuzzy handcuffs you didn't like, and your favorite saying is "Sticks and stones may break my bones, but whips and chains excite me." That, or you're a mother of young children who desperately needs a vacation and a weekend of Netflix and chillin' while the kids are with a sitter (read: me).

When you invite someone over to "Netflix and Chill," you like to keep 'em guessing by rambling nonsensically for the first 20 minutes or so before busting out your "let's get more comfortable" look. You're drawn to the syncopated beats of Yeezy because, if you asked 'Ye, he'd tell you he invented "Netflix and chill" anyway. Heretofore, his music is made for running game. Besides, he's married to Kim Kardashian, so... there's that.