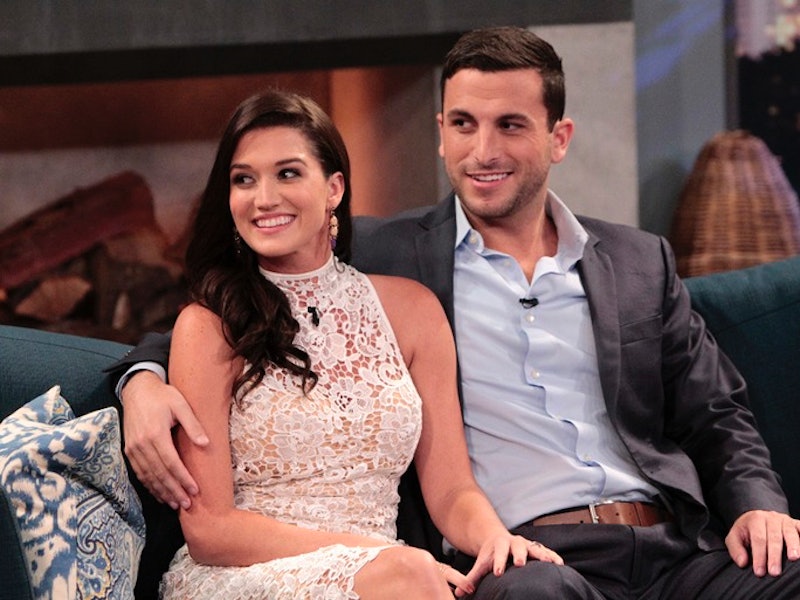 It's safe to say that Bachelor in Paradise couple Tanner and Jade have quickly become one of the most beloved couples in Bachelor Nation history — and it's easy to see why. It was basically love at first sight when they arrived in Mexico, and they only had eyes (and roses, of course) for each other. Janner had fans rooting for them all season and Tanner's proposal to Jade in the finale made audiences everywhere swoon. Still, some of us were worried this whirlwind love story was too good to be true — so it was a huge relief when we learned they're still together and moving forward with their engagement. Jade confirmed on Twitter that she will move to Kansas City, and based on social media it looks like she's already spending quite a bit of time there. And, even Jade and Tanner's pets seem to be adjusting pretty well to their new step-parents and step-siblings.

Jade is a dog person and Tanner is a cat person, which could be viewed as potential hurdle. Based on her Instagram posts, Jade is passionate about all dogs — not just her own adorable Boston Terrier, Pippa. Every Monday she posts a photo and details about a dog who is looking for a new home. Although Tanner doesn't post as many pics as his fiancé, he's not shy about declaring himself a "creepy cat guy" (I prefer "charming cat guy," but that's just me). But, despite their different animal preferences, it looks like they're getting along great with each other's pets. It may take a little longer for Pippa and Tanner's cats to become BFFs, but that happens sometimes with step-siblings, so I'm not concerned.

Let's take a look at Jade and Tanner's adorable pets:

This Is Jade's Boston Terrier, Pippa

Pippa hates Mondays as much as the rest of us.

And, she will not let you tell her how to feel, OK? Based on that #rebelheart hashtag, I would guess that she's a Madonna fan as well — so Pippa has great taste in music.

I feel the same way when people try to wake me up. Pippa is a dog of the people.

Do you ever wonder what your dog is thinking about? The answer is probably "food" most of the time.

These Are Tanner's Cats

But, they're all grown up and here's one of them bonding with Pippa. (I think? I mean, they're not attacking each other so that's a step in the right direction for these soon-to-be step-siblings.)

So, How Are Tanner And Jade Getting Along With Each Other's Pets?

Jade is taking this very seriously — and that's probably a smart move, because cats are harder to win over than dogs.

Hey, they look pretty cozy! That book must have provided some great tips.

Meanwhile, Tanner and Pippa look totally happy cuddling with each other.

Jade and Tanner's pets are too cute. How about finding a way to fit them in the wedding party? It would make the ceremony even more perfect than we hoped for!