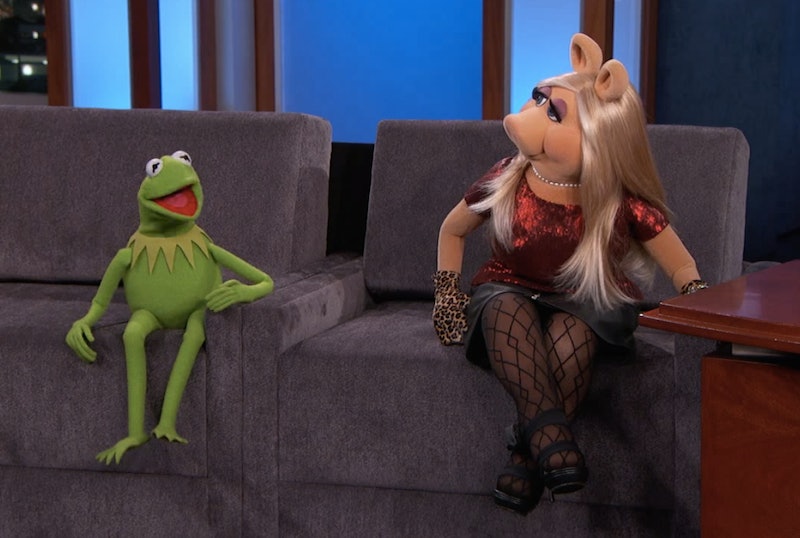 Yikes. I thought my heart couldn't break any further, but I was swiftly proven wrong when Kermit and Miss Piggy gave their first post-break up interview on Jimmy Kimmel Live on Monday. Kermit and Miss Piggy, the stars of the upcoming ABC show The Muppets, had a highly publicized split in August and, since then, have both been the subject of a great deal of rumors, from Kermit's relationship with ABC co-worker Denise to Miss Piggy's involvement with celebrities from Liam Hemsworth to Josh Groban. The Internet has not taken Kermit and Miss Piggy's break up well, myself included, but their appearance on Jimmy Kimmel certainly proved that it might be for the best that these two never, ever, ever get back together. After all, it was kind of hard for Kimmel to get a word in edge-wise without the pair of them taking shots at each other, although we did learn that Miss Piggy might be the next Bachelorette. No, really.

Kimmel sat the two Muppets down to cut right to the heart of the matter when it came to the disagreements that led them to say goodbye to one another once and for all. According to Miss Piggy, it wasn't any one thing that led to the split. "It was the usual laundry list: put the lid down, closing the refrigerator door… not doing the dishes while taking a bath in the sink," she said, giving Kermit a dirty look as he scrambled to defend himself by pointing out that he's a frog and she knew that when she decided to enter that relationship with him in the first place. Kimmel also asked Kermit about Denise and, despite denying that he and Denise were dating before, Kermit did not object to Kimmel referring to Denise as his girlfriend during this tell-all interview.

"She's not a public person. She's not a celebrity," Kermit said. "She's one of the heads of marketing with ABC—" At this point, he was interrupted by Miss Piggy asking Kimmel for his phone so she could play Candy Crush. To which Kermit responded by pointing out, when asked, that Denise is "old enough," but "not as old as she could be," pretty much confirming that he dropped Miss Piggy for a newer, younger pig. Your mileage may vary on whether he was justified in rubbing that in her face, let alone the slut shaming that immediately followed when Kimmel turned the conversation over to Miss Piggy's love life. (How is it any of your business if she's "dating anyone," Kermit? Mind your own, and watch your tone!)

However, the most interesting point of the interview was when Kimmel said that Miss Piggy should be the next Bachelorette, and Miss Piggy revealed that she and ABC were having conversations about that very thing. I, for one, find it absolutely staggering that ABC has gone this long without having a Bachelorette who was a pig, andI'm glad that Miss Piggy is the leading candidate for being the first one to break through that species glass ceiling. I imagine that her season of The Bachelorette could be the most exciting one in the history of the show, especially since, in all likelihood, Miss Piggy might end up giving the rose to herself in the finale and deciding to marry herself like Sue Sylvester from Glee. Either way, Kermit will soon be very, very sorry he ever let her go.

Check out the full interview below, and don't forget to check out the first episode of The Muppets on Tuesday, Sep. 22, at 8 p.m.