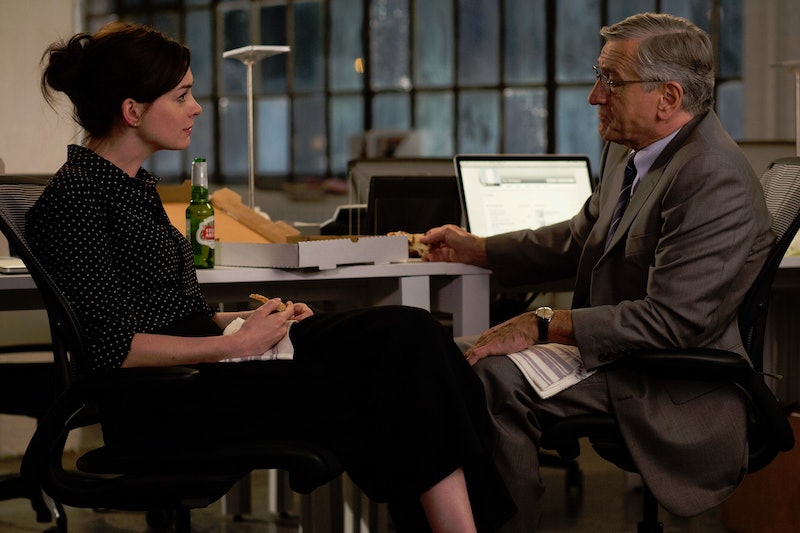 What is it about movies with female leads that invites endless comparison? The Intern stars Anne Hathaway as the founder of a swiftly growing online retail empire and Robert De Niro as a participant in the company's senior internship program. Hathaway's 2006 comedy The Devil Wears Prada is coming up quite a bit in online conversation lately, because apparently two movies in 10 years about women running fashion-related companies begs some kind of comment about repetition. But The Intern vs. The Devil Wears Prada proves that these movies are not just different versions of one another.

First of all, the two movies have markedly different tones. The Intern comes from writer/director Nancy Meyers, who's brought audiences several romantic comedies with female characters that are recognizable from real life, like Something's Gotta Give, The Holiday, and It's Complicated. The trailer is all delicate humor and warm smiles. The Devil Wears Prada, on the other hand, is adapted from the best-selling novel by former assistant Lauren Weisberger about her sometimes horrific experiences being on the bottom rung of the fashion world. The comedy in that film lives in catty insults and public embarrassments.

But the dissimilarities don't end there. Here are six more pieces of evidence that prove that The Intern and The Devil Wears Prada are two different and individually awesome films about fashion.

1. Anne Hathaway Is The Boss

How the tables have turned, Runway Magazine! Hathaway's character Jules Ostin built About The Fit herself and is still running it. In Prada, Andy is a writer just trying to get her foot in the door. I'm liking how authority looks on her.

In The Intern, Jules's company has its headquarters in a converted Brooklyn factory, a reality that permanent Manhattan-dweller Miranda Priestley wouldn't even want to contemplate. Think of it this way: Runway is all about establishment fashion; About The Fit is bringing fashion to the people.

3. It's All About Casual Chic

The denizens of The Intern's workplace are just as stylish as the fashion-obsessed employees at Runway. But the former are dressed for subway commutes, team brainstorms, and being generally approachable, not for giving off an "I'm better than you" vibe.

4. Everybody Is Pretty Nice To Each Other, Actually

In The Intern, there's not much conflict; the characters are mostly kind and get along fairly well. Sounds like a far cry from the backstabbing and personal attacks over at Prada, for better or worse.

5. Jules Wants To Work As Hard As Her Employees

6. Meryl Streep Is Nowhere To Be Found, Unfortunately

There you have it: The Intern and The Devil Wears Prada both exist, have female leads, and are set in and around the world of fashion, but that very much doesn't mean that they're carbon copies of each other.