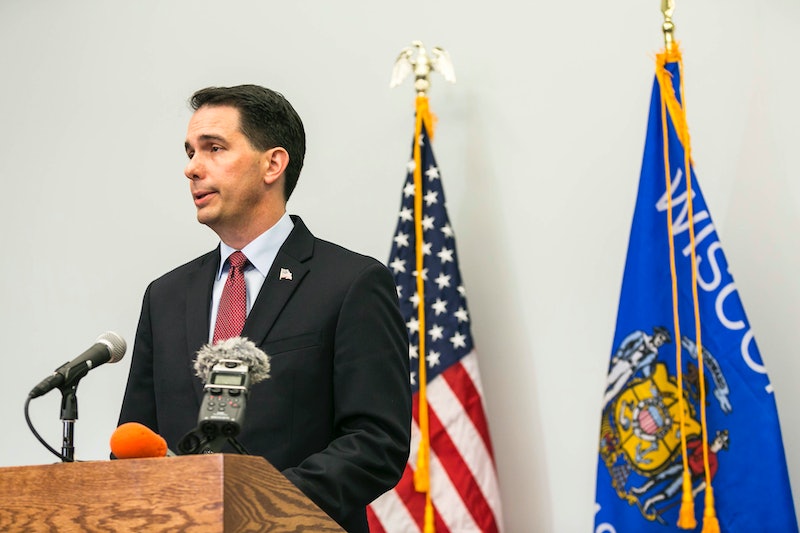 On Monday evening, Wisconsin Gov. Scott Walker announced that he was ending his bid for the 2016 Republican presidential nomination. But Walker is hardly the first politician to have an incredibly short presidential campaign. In fact, he's not even the first Republican to drop out of the race — Rick Perry ended his own just two months after launching it (and 10 days before Walker's announcement). Announcements like Walker's and Perry's aren't common, but they're not unheard of. And backing out of the race now will give their supporters the chance to decide whom to back now, with plenty of time before the election. (Not to mention how donors to a pro-Walker super PAC will get back some of the money they donated to his campaign.) So how does Walker's short-lived presidential campaign, which lasted just 70 days, compare with other campaigns throughout history?

Although Walker's campaign might seem surprisingly short, presidential campaigns didn't drag on for so many months when the country was first founded. To provide some context about Walker's exit from the race, we've rounded up some of the shortest official and unofficial campaigns for U.S. president — including both successful and unsuccessful ones.

If we're being technical here, America's first president should take the prize for having an astonishingly short presidential campaign — because he didn't have one at all. With 69 electoral votes, George Washington was unanimously elected to serve two terms as president. He is the only U.S. president to be elected unanimously, though, so it shouldn't come as much of a surprise that he didn't need to do much campaigning. Although other presidents weren't elected unanimously, The New York Times notes that the trend of "presidential passivity" continued into the days of Abraham Lincoln, who said he was too busy to worry about the election.

Scott Walker has nothing on Pepper. The Democratic Florida senator's presidential campaign lasted just a day and a half. The Orlando Sentinel explains how Pepper never actually wanted to be president; instead, he wanted to make sure that Harry S. Truman wasn't nominated in the election. Pepper wanted to nominate Dwight D. Eisenhower, but Eisenhower said that he had no interest in running for president. So Pepper took matters into his own hands and announced his own candidacy, only to resign less than a week later. Truman didn't appreciate what The New York Times called "the funniest moment of the convention," though — when Pepper ran for senate re-election in 1950, Truman supported his opponent, George Smathers. Pepper lost the senate race, though one of his goals did come true, as Eisenhower succeeded Truman as the next U.S. president.

In 1995, New York magazine proclaimed that Colin Powell would be remembered in American history not only as "the top military administrator in our most efficient war," but also for running the "shortest presidential campaign" in memory. Ahead of the 1996 U.S. presidential election, Powell said that he "wouldn't rule out" a presidential bid against Democrat (and future president) Bill Clinton, adding that he had the skills to be president.

Powell also told reporters in 1995 that America "may be ready" for a black president. After just four days, though, the headlines about a potential Powell presidency disappeared. New York speculated that one interview may have led to Powell's lack of Republican support in a Gallup poll — he told Time that he supported legal abortion and gun registration, which didn't align with the party's standards. When Powell officially announced that he wouldn't run for president, he said that he lacked "passion" for politics.

McCotter's (R) presidential campaign lasted longer than Perry's and Walker's 2016 runs, but he still dropped out of the 2012 race incredibly early. McCotter announced his bid for U.S. presidency on July 1, 2011, and then dropped out of the race on September 22, 2011, placing his support behind fellow candidate Mitt Romney. According to presidential straw polls, he had less than 1 percent of Republicans' support, likely because he was far from a household name.

Romney dropped out of the 2016 presidential race before the Republican primary debates began — and before he even launched an official campaign. But many people had speculated that he'd launch a presidential bid, even though he lost to Barack Obama in the 2012 presidential election. In January 2015, Romney told a group of donors that he was considering a presidential run in 2016. But on January 30, he announced that he would not be running for president.