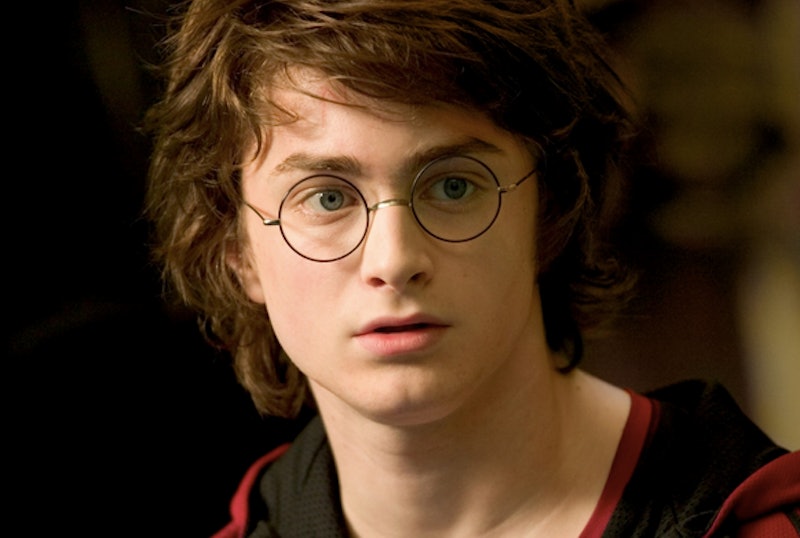 It might have been Harry's scar that made him famous, but it was his hair that made him rich. In this morning's Pottermore update, J.K. Rowling revealed that Harry Potter's grandfather invented Sleekeazy hair potion — the very same potion that Hermione Granger used to tame her unruly curls at the Yule Ball. Why is this important, you ask? Well, first and foremost, everything that has to do with Harry Potter is important, because duh. But second off, this means that there is a strong possibility that a huge chunk of that massive fortune waiting for 11-year-old Harry in Gringotts only happened because wizards were too dumb to go buy hairspray at the drugstore.

I mean, think about it: obviously none of that fortune came from Lily Potter's side of the family, since they were a bunch of Muggles. So that means the genetically messy hair that Harry was known for — the same hair that James Potter basically used as a mating ritual to snag his mom, and the same hair that once led a fabulously sassy mirror to tell Harry "You're fighting a losing battle there, dear" — is the reason he was able to live his oh-so-glamorous ~wizard lifestyle~.

JK, JK, guys. J.K. Rowling actually revealed a very rich and comprehensive history of the Potters and how they amassed their fortune along with the update today, so it wasn't all due to the Sleekeazy. But in true J.K. Rowling fashion, this one shred of information we have gotten from her has only launched a thousand more questions. Without any further ado:

Was Harry Named Harry Because They Owed Their Fortune To ... Hair?

I siriusly wouldn't put it past James Potter to pull that kind of shenanigan.

What The Hell Does Sleekeazy Do To Redheads?!?

As the sister of several gingers and a human with natural curiosity, I have so many questions about why the Sleakeazy potion claims it has "unique results" on redheads. Maybe it makes Potter men more attractive to redheads? It would explain the latter portion of their family tree, and why the Weasley family put up with Harry's shiz for so long.

Why Did It Never Occur To Anyone To Tell Harry About Sleekeazy?!

I feel like half of the books could have been titled Harry And The Unruly Hair. Hell, Daniel Radcliffe's hair deserved a casting credit in the fourth movie. I get that the whole "you defeated the Dark Lord as a baby!" thing was a bit of a distractor when he was first introduced to the wizarding world, but like, nobody said anything? Draco didn't even use it as fodder to make fun of him?!