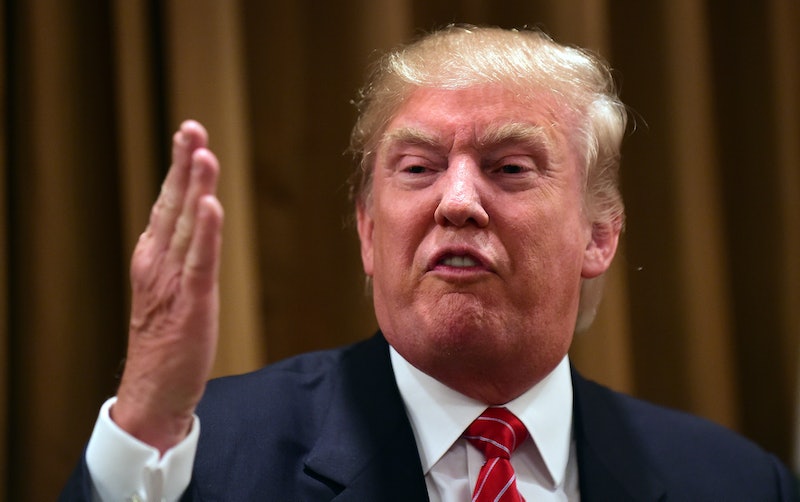 Donald Trump, the business mogul with a knack for making blanket statements about specific races and insulting well-known women around the world, has left quite a mark on the 2016 presidential race so far. Trump, who is still leading in the polls, is expected to release another book prior to the next 2016 Republican presidential debate. In the meantime, he's still attacking his opponents like a moody, wet cat and trying to do damage control on his Twitter #AskTrump Q&A, which turned into a trolling session for jokesters and his opponents. Given everything we know about him, just what has helped him get so much attention in the 2016 presidential race? The best Trump GIFs will tell you everything you need to know about 2016's richest candidate.

Trump has recently gone on the defensive after Hewlett-Packard CEO Carly Fiorina rose to second place in the polls in the wake of the second GOP debate. Though Trump is still the party's leader, he dropped eight percentage points, to 24 percent support. And that change has brought out Attack Trump — who isn't much different than Normal Trump, I guess. Trump's corn-husk-like hair, his inability to stick to the issues when attacking an opponent, and his plan to build a wall along the U.S.-Mexico border make him one of the most outrageous — and thus GIF-able — GOP candidates. Here are 22 of the best Trump GIFs, because Trump Trumps all, even when Trump is getting Trumped.

And just in case you wondered if his hair is attached...

The Donald has the best speaking faces.

And those hand gestures.