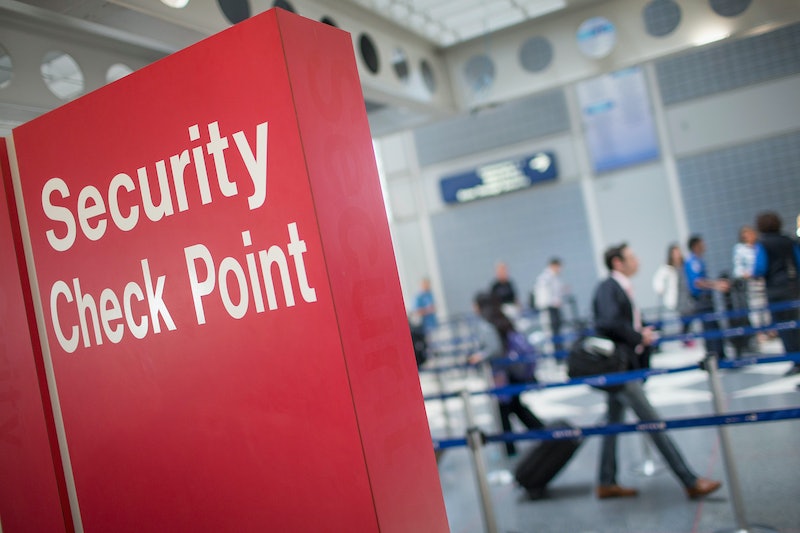 For some, getting through airport security is merely a hassle. Shadi Petosky's alleged experience as a trans woman with the TSA at Orlando International Airport, however, goes far beyond the annoyance of having to stand in line and take off your shoes and coat. On Monday, Petosky's Twitter quickly went from an average account of the daily life of a writer and producer — her credits include Mad TV and Yo Gabba Gabba! — to an account of what Petosky says was her experience as a trans airline passenger in the days of body scans, full-body pat downs, and policies that scramble to keep up with changing times. The TSA told Bustle in an email that the organization "takes all potential civil rights violations very seriously and [has] conducted a review of the incident"; however, the hashtag #TravelingWhileTrans, which began in response to Petosky's account of her experience, reveals exactly how important trans education is.

Petosky's alleged troubles began Monday afternoon. "I am being held by the TSA in Orlando because of an 'anomaly' (my penis)," she tweeted. She claims that her detention lasted 40 minutes, during which she live-tweeted her account of being locked in a room alone and enduring two full-body pat downs. By the time she was released, she says she had missed her flight; she was then instructed to rebook at the American Airlines gate, because returning to the counter would force her to return through security, where she would be reflagged. But unfortunately, her troubles didn't end there. You can read her own account of the incident below, edited for length. (Bustle reached out to Petosky for comment but had received no response as of press time.)

At this point, Petosky claimed that she was unable to find an open American Airlines gate, and police officers escorted her back to the ticket counter.

She then wrote that she was told a ticket out of Orlando would cost $955, and a manager suggested she ask for a "private screening" next time she flies. However, Petosky says she doesn't want to be singled out; she just wants to fly like everyone else.

American Airlines tweeted that her flight had been rebooked and she was "never charged," but Petosky wrote that she had no knowledge of this. "Both [the TSA and American Airlines] are issuing statements but I am still in the airport," she tweeted.

Bustle reached out to American Airlines for comment. "American Airlines immediately rebooked Ms. Petosky on the next available flight – at no charge – to Minneapolis–Saint Paul International Airport (MSP)," a spokesperson said over email. "We never charged her [for] the next flight – we don’t charge any passenger for that, if they miss their flight due to a delay at TSA."

Petosky was eventually placed on an overnight flight in Miami, where she was still located at the time of this writing.

Bustle also reached out to the TSA for comment. The organization wrote that the agents had acted in accordance with TSA procedure: "Our officers are trained to properly screen members of the transgender community. TSA takes all potential civil rights violations very seriously and conducted a review of the incident," spokesperson Mike England wrote over email. "After examining closed circuit TV video and other available information, TSA has determined that the evidence shows our officers followed TSA’s strict guidelines. Supervisory personnel and a Passenger Support Specialist participated in the screening to ensure guidelines were met."

The TSA's frequently asked questions page notes that screening procedures for transgender passengers are as follows:

Transgender persons should use the name and gender that appears on their government-issued ID when making flight reservations and at the security checkpoint. You may ask that carry-on bags be screened in private if a bag must be opened by a TSA officer to resolve an alarm. Screening can be conducted in a private screening area with a witness or companion. You may request private screening or to speak with a supervisor at any time during the screening process.

No further information is readily available. The vagueness of these brief policies is troubling, to say the least, providing little protection for trans passengers from potential harassment.

Furthermore, Al Jazeera reports that body scanners at most airports feature literal pink and blue buttons dividing passengers into men and women. Agents assess a passenger's gender by sight and press the button accordingly. This was most likely the cause for Petosky's detention in the first place — if the TSA agent presses the wrong button or a person's genitalia doesn't correspond to their gender identity, as may be the case for some trans people, it can show up as an "anomaly" onscreen. This leads to additional screening like pat downs, and Petosky's tweets are proof of how quickly things can escalate.

In fact, Petosky's story prompted hundreds of other trans people to chime in with their own stories of the difficulty of traveling. The hashtag #TravelingWhileTrans quickly took on a life of its own, making it clear how much discrimination trans passengers face while traveling.

According to National Center for Transgender Equality Director of Policy Harper Jean Tobin, it's all an all-too-common occurrence for transgender people: "For years TSA relied on body scanners and prison-style pat-downs as its primary tools despite mounting evidence that they don’t work. It’s a waste of billions and unfair to all travelers, but anyone who looks different or whose body is different is harmed the most," he said in a statement provided to Bustle via email. "These intrusive methods were adopted without proper rulemaking and NCTE is part of an ongoing lawsuit to force the agency to do complete that process."