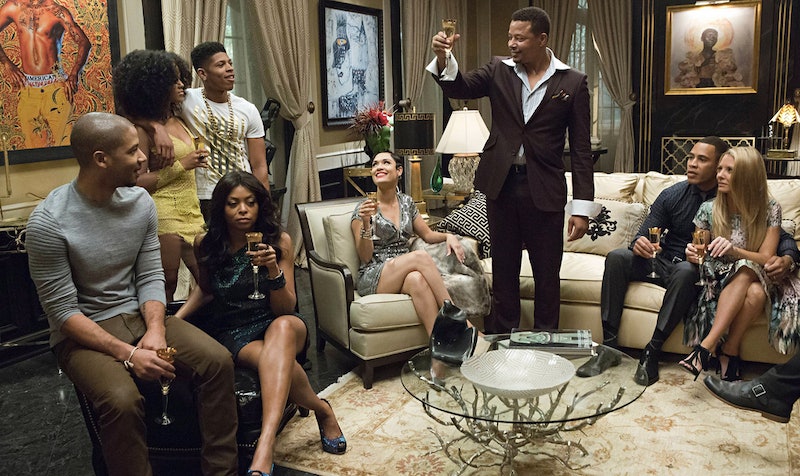 Have you been feeling like time has been drip-dropping at the slowest possible pace since the Empire Season 1 finale aired in March? Same. Unlike Hakeem's totally fire single, it's been a sad and painful time for us all. But, thankfully, even though Taraji P. Henson didn't win an Emmy on Sunday night, all Empire fans are about to be winners. Because our queen Cookie and the rest of the Lyons will finally be back in our lives when Empire Season 2 premieres on Sept. 23. And, with the latest trailers promising more than fans could come up with in our wildest, hip hop-loving dreams, there's no time like the present to recap Empire Season 1.

When we left off in March, everything — and I mean everything — had changed for the Lyons hip hop dynasty. Well, everything except for the fact that Lucious is possibly the worst and most manipulative parent on television. So, where did we leave off? The road to Empire Season 2 was full of power-plays, alliances, and truly exceptional talent — so, naturally, Bustle editors popped bottles to properly celebrate Season 2 and recap Season 1. Because I'm not the only person who's been dreaming myself into the "Drip Drop" music video for the past six months.

Here's the short list of everything you need to know before Season 2 takes us back into the Lyon family drama.

The Empire Is Divided

In the ultimate power-move, Lucious left Jamal in charge of the Empire because, finally, he realized that his son has talent. After finally finding himself as his father's "favorite," Jamal let all of that power go straight to his head — making him less of a new ruler and more of Lucious' figurehead now that he's in prison. During the Season 1 finale, Jamal more or less cut ties with Cookie, who spent most of the season helping him build the career with the talent Lucious refused to acknowledge. He's the worst now and, honestly, I'm sad about it.

Hakeem Was & Still Is On Fire

The "Drip Drop" effect is totally real. Jamal can try, but he can't bury this kind of talent — #sorrynotsorry.

Lucious Isn't Dying, But He Might As Well Be

Talk about a freaking plot twist. Most of Season 1 was spent on Lucious deciding who would get the Empire after he was diagnosed with ALS. Unsurprisingly, the devil can't die — Lucious was misdiagnosed and, even though he's still ill, is very much alive for the longterm. Which would be great news for him, if he didn't immediately get carted off to jail for Bunkie's murder.

If you can't beat 'em, join 'em. And that's exactly what Anika learned in Season 1 — there was no way she was going to outsmart Cookie and actually take over Empire with Beretti's help. Why battle each other when they could team up to battle Lucious and take over Empire together? Brilliant. Just brilliant.

Sure, we lost Bunkie pretty early in Season 1, but we're still not over it. But Uncle Vernon's Season 1 death in the family room with the candle stick really took the cake — I always knew that Rhonda was underrated, but no one will ever underestimate her again after she took Vernon out.

There's A Little Lyon On The Way

Nothing like a little murder to create the perfect moment to share that you're pregnant, right? Rhonda and Andre are expecting — the world can only be a better place if there's one more Lyon in it.