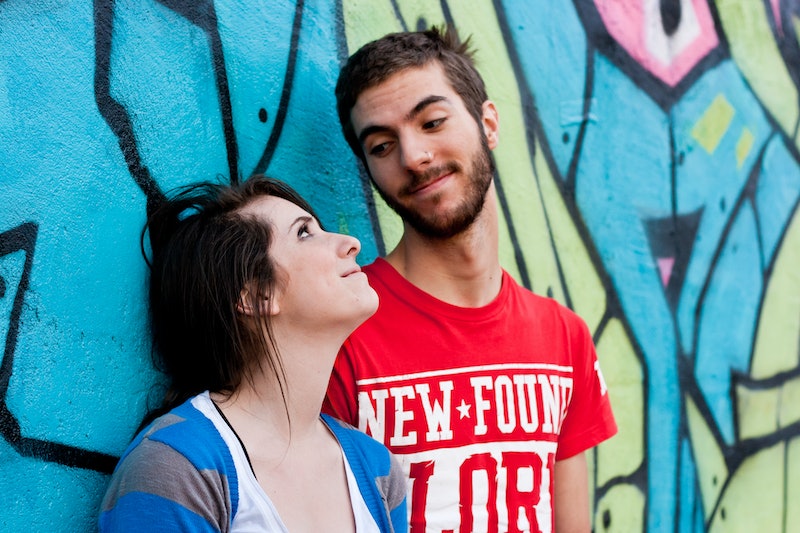 Oh God, here I go, writing yet another article about relationships I might come to regret a year from now. Well, that's OK. Your 20s are supposed to be messy and vulnerable that way.

For me and many others, this decade has been all about love and work. I'm a serial monogamist and hopeless romantic who's hoping to grow out of it, and I am, like most 27-year-olds and human beings, a complete work in progress. Take everything I say here with major grains of salt, and know that there is no way I think that my experience could possibly speak to all women in their 20s.

That said, from talking with my friends, I know there are some common lessons we all seem to be learning about dating, relationships, and love in this decade. All of us are different, but the potential learning curve is equally steep for most of us.

As certain lessons about dating and relationships have started to become more clear, I feel oddly compelled to share a few things that I wish a 27-year-old had told 22-year-old me. I'm sure I wouldn't have listened, because you kind of just have to go through these things yourself. But that doesn't mean it wouldn't have been nice to hear anyway.

1. It's Not Anti-Feminist To Want Your Partner To Be Successful

Until pretty much this year, I've managed to date guys who were in various states of underemployment. Whether they only had part-time gigs or were straight up out of work, I gravitated towards guys who were still "figuring it out".

It made sense — in some ways, I'm still figuring it out myself. Who knows what I'll want to do for the rest of my life, right? Well, here's the difference between me and most of the guys I dated: I'm actively pursuing something anyway, successfully. Sure, I'm not always 100 percent sure what that something is, but I have ambition and drive to figure it out.

Many of my female friends are the same way — and yet I've watched all of us date guys who didn't even own fitted sheets or a checkbook. I told myself that it didn't matter to me if a guy could take me to a nice dinner sometimes, or travel with me spontaneously. I told myself that those things were mostly superficial. A guy who's just as successful as me, not a player, AND likes strong women? It always seemed harder to find. Or at least, that's what I told myself, as I wrote off the more ambitious guys I wanted most as "probably jerks" for seven years.

By picking guys I could try to make projects out of and help direct, I was trying to avoid confronting the ways in which I could be more professionally fulfilled myself. But after yet another terminated relationship where a lack of ambition was at the core of our issues, I realized something: It's not that I need a guy to be rich — I just need him to be about something, actively. And there's nothing wrong with that.

2. Beware Of Making Yourself Smaller

Because I really, really wanted the guys I was with to be Men and not Boys, I would frequently make myself smaller in relationships to compensate for the ways they didn't have their sh*t together.

One of the main ways that played out was baby talk. Of course, some baby talk is totally normal. But by assuming the tone of a younger girl who needed to be taken care of when I was feeling needy or I wanted attention, I was often able to trick myself into feeling like the guys I was with were more dominant or protective than they actually felt to me otherwise.

Now that I'm with what I would consider to be my first "Grown Man" (whatever that really means) I find the need to baby talk has mysteriously mostly disappeared. Sure, I'm still sweet and affectionate, but I don't want to sound like a baby to him. I'm acting more like a grown woman, because I am one — and I want to be his equal.

3. The More You're Obsessing, The Less Happy You Are

I remember someone saying once (in a movie maybe?) that you can always tell when a friend is really in love because you don't hear much from them about it. Sure, that has many exceptions, (hello, abusive relationships) but by and large, I've realized that the happier I am, the less I feel the need to tell lots of people about my relationship in the same detail, because I don't have as much to prove. Sure, I tell my friends about the new person I'm dating, but there's no hours of obsessing over what that text meant, or if someone is really "the one."

Heh, famous last words. But at least I'll be more wary of my obsessiveness now.

4. There Are Some Things About Sex You Shouldn't Compromise On

Sure, there are always some compromises when it comes to sex. Maybe your partner has a kink they want you to try, and that's great. But the basics — chemistry, sex drive, how naturally dominant or submissive your partner is — those things are pretty damn fundamental to how you'll work as a couple.

I spent a lot of time with nice, attractive guys who I just didn't have much chemistry with. Sure, I found ways to ensure I orgasmed, but that throw-down I really craved was never really there with them. I wrote off fantasies I had during sex — like being spontaneously pushed against a wall and kissed, hard — as things I could compromise on, or that might happen someday down the road.

But here's the thing: if someone hasn't pushed you up against a wall by the first month, they probably never will. That's something I could have compromised on, but once I stopped being so afraid of the dynamic and spontaneity I actually wanted, I found it was a lot easier to spot it in someone, and pursue it.

5. You Don't Owe Anybody Anything

I spent a lot of time feeling like I owed the men I went out with something. If they took me on a nice date, I thought it was my responsibility to fill every silence with a question about them. If they gave me an hour-long back massage to prove that he loved me, then I guess we were going to have sex. If he cooked me dinner on the third date, well, I'm sort of leading him on if I don't try to like him, right?

But here's the thing: you don't owe anybody anything. Ever. Once I started releasing some of that sense of obligation in my mid 20s, I started having a lot more fun, better sex, and generally owning the decisions I made a lot more.

6. Your Intuition Is One Smart Bitch

I don't know about you, but I've realized I can usually sense most things about my dynamic with someone by the end of our first date. Most of the things that work right away are evident by then, as are the things that just feel ... off.

Because I was less accepting and loving of myself in my early 20s, I needed more validation, and often adjusted my behavior in small ways on dates to ensure I was their dream girl — whether I really wanted to be or not.

I spent a lot of time ignoring any red flags early on, and who knows, I could very well be doing the same thing without realizing it now. But I don't think so. Something's changed in my late 20s; because I've formed more of a relationship with myself, I'm actually paying attention to my own impressions about a person, and valuing my own input about them in a more conscious way. Call it intuition or simply listening to yourself, but either way, I'm not going back.

7. If Someone Doesn't Make You Feel Good About Yourself Right Away, They Never Will

I spent a lot of time on one guy who I thought could fall in love with me, if only I were charming, pretty, manic-pixie etc. enough for him. Nope.

If someone makes you feel like less than a total catch in the beginning, most likely, they always will. It's a harsh truth, but I've seen it play out with me and my friends time and again.

If someone fails to make you feel like anything but gorgeous and happy, especially in the beginning, don't interpret it as a reflection on your self-worth. Take it as a sign that you need to pay attention to the situation you're potentially walking into.

8. If You Have Ongoing Issues With Their Appearance, Maybe You're Just Not That Into Them

Sure, it's normal to care a little bit about someone's style or facial hair. But if you're simply not attracted to them (or feel irrationally angry at them) when they wear those jeans you hate, then there might be something else at play. It's totally fine not to feel attracted to someone — that in itself doesn't make you superficial or mean. What is somewhat mean is continuing to date someone you're just not that into [when they shave or wear that sweatshirt or grow their hair out].

I spent a lot of time shopping for new outfits for guys, or telling them how I wished they'd look, and I never felt good about it. But the thing is, looking back, when it came to the people I had the most chemistry with, those things just didn't matter much to me. While I'll certainly always care about my partner's appearance, whether or not they're exactly my style, if I'm truly attracted to them, has become less important.

I always liked the way my now-ex put it: "I think when we're done teaching each other, we'll know." In the end, we both did. People outgrow each other, and that's perfectly OK; even beautiful. Viewing a breakup as a failure is a misinterpretation, because breaking up often means at least one of you a) is brave enough to admit your feelings; b) knows themselves well enough to act on them; and c) is continuing to figure out what they want.

We date people who match where we are at in life. I chose the people I did, and I choose who I'm with now, based on a crazy combo of how mature and self-confident I am, what my career and friendships are like, and the many things I've learned from my past relationships. The fact that I've been able to learn lots of lessons — and take them with me — isn't a failure. I believe it's called growing up. And it just keeps going.