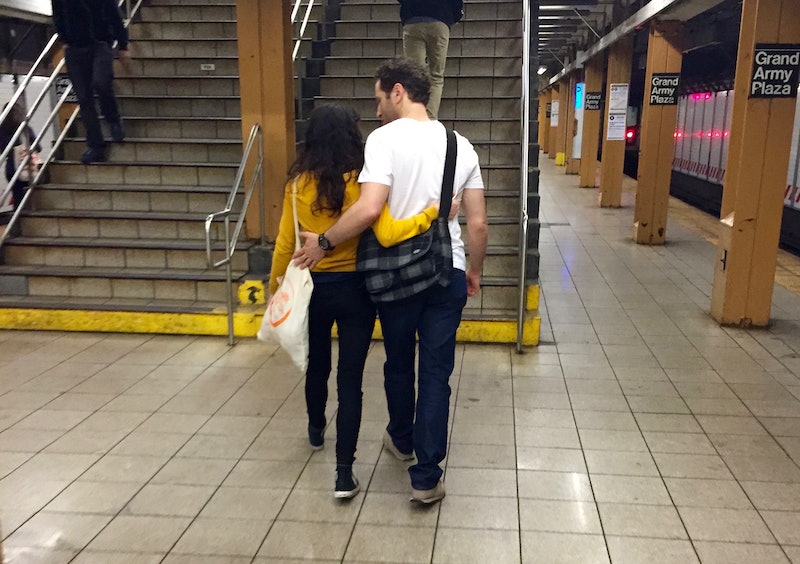 Usually, by this point in the relationship, we'd have broken up. And if not, we'd have broken up and gotten back together at least once, and I'd be plotting my next exit. Before I met my partner Jacob, I'd been a serial monogamist ever since I'd started dating, and found myself in a different relationship roughly every year. I was addicted to falling in love, and I did just that, many times.

But the kind of love I repeatedly fell into was also never really risky or serious, and that kept it from being scary. I always knew, deep down, that we would eventually break up, and in that knowledge, I protected myself from any potential heartbreak. I picked people I could love — but not so much that it could really mess me up if they ever left me.

When I met Jacob, I learned that some cliches exist for a reason, and that it is possible for me to love someone vulnerably — perhaps, even, to love someone more than I love protecting my own ego. The ways I began to realize that I was letting my guard down, and admitting to myself that I was in some seriously good trouble, were small. But they were clear.

Normally, I might be afraid I'd regret writing this, should we break up some day. But that's the thing: for the first time, I'm not expecting we will. And if we do, I still think I'll be glad if I've given someone who reads this new ways to express some of what they feel to the person, or people, they love.

1. I Began More Sentences With "When" Instead Of "If"

In past relationships, I always qualified any talk of the future with the word "if". If we're together next year we'll go on vacation; If it works out, we'd make cute kids. I used the conditional tense because in my mind, I was filling in "...if I haven't broken up with you by then". Maybe it was because Jacob was oddly sure from the beginning about wanting to be with me for the long-haul that I felt I had permission to follow suit, and found myself saying things like, When we go on vacation next year, can we go to Berlin? and I'm not sure whether I'll want us to have kids.

I allowed myself, for the first time, to imagine we would stay together. Like, forever. It was really, really scary — I'm the product of divorce, and have never believed that I will ever have that kind of longterm luck with love. But I couldn't deny what's in front of me: the most compatible relationship I've ever been in, and one I'd actually like to stay in.

2. The Idea Of Him Dying First Scared The Sh*t Out Of Me

I think about death a decent amount, and frankly, I'm pretty f*cking scared of it. So in the past, whenever I've allowed myself to fantasize about growing old with a boyfriend and asked myself who I'd rather have die first, the answer was always, Um, him. I thought that was just the way it was; it even seemed like it might be a good way to approach the issue. Why should you value anyone's life more than your own? That's some romantic bullsh*t.

So imagine my surprise when, after just about six months with Jacob, I realized that the only real thing that scared me about a future with him was the idea of spending a long, happy life together, only to have him die on me first — leaving me all alone to miss him and experience a fear and sadness so profound that it would serve as cosmic payback for my otherwise lucky life.

In a way, this fear is still about protecting my ego — I'm afraid of an old age alone without him. But my imaging (at this point anyway) that I'd rather go first, with him holding my hand and looking in my eyes? Well, that's shocking, because I'd do almost anything to live as long as possible. Anything, apparently, but wish that I experience those extra years without him.

3. I Wanted To Call Him My Partner, Not My Boyfriend

When Jacob first started calling me his partner, I didn't feel like it was deserved. We hadn't even been together that long — wasn't that something only gay couples and people who'd been together years were allowed to say? But the word "boyfriend" didn't seem to fit him either. "My man," felt right, but a bit awkward for introductions.

But we were living together, sharing expenses and adventures, and talking about our future, and gradually, the term "partner" felt like it fit. It's a more serious word, and I'm using it because I view our relationship more seriously. It's the first time I've used the term, and though it felt weirdly adult at first, now, it just feels respectful of my commitment to my relationship.

Jacob and I are "monogamish". We fundamentally don't want to restrict each other from having new experiences with other people, but we're not seriously dating anyone else, and we have no plans to fall in love with other people anytime soon. However, I have hooked up and gone on casual dates with other people in the time we've been together — sometimes with him, and sometimes without him. And while I've yet to see him with another woman, for the first time in my life, I want to, eventually.

While Jacob doesn't suffer from the same kind of romantic restlessness I do, I've told him I don't want to restrict him anymore (I did in the beginning, and was the only one "allowed" outside experiences, because he was OK with it and I wasn't). I now want us both to have freedom, but that doesn't mean I've become some magnanimous, selfless person. Rather, it's because I've seen him experience compersion (taking pleasure in the pleasure of someone you love), that I can now comprehend and desire it. To my own surprise, I've gotten to the point where I genuinely want to see him make someone else feel good, and where I don't want to restrict him from feeling good himself.

I also know that being monogamish has ultimately only made me more committed to him, reminding me that while the grass on the other side is new and fun, it is not, in fact, greener. It's in large part because he doesn't restrict me that I don't feel constrained in a longterm relationship for the first time, and I want him to feel the same way.

5. My Attitude Towards My Long-Time Crush Changed

I have liked the same guy since 4th grade. We'll call him Josh. Though we only went to school together until 8th grade, I kept crushing on Josh all through high school, and continued to dream about him well into my 20s. Of course, it wasn't so much Josh himself who I was dreaming of the last 15 years — although Facebook stalking confirmed I have always had very good taste — but rather, my unfulfilled wish of having him. Josh came to represent "The Perfect Man"; he was my ideal because he was pure projection.

So when his sister suggested on Facebook that I get in touch with him for a story I was working on, I jumped at the chance. When we met up, I still found him very, very cute. He was also as smart and nice as I remembered, and I got the feeling that one long glance from him could make me question my entire future. When Josh's girlfriend texted him to ask where he was after almost three hours of talking, he said he should go home, and that was that.

I went home to Jacob, and at first, it felt like I was followed by Josh's ghost. I'd just had a drink with The Perfect Man, and it turned out I still couldn't have him. As I sat with Jacob and told him about the experience, at first, I found myself resenting that he wasn't Josh. Here, instead, was my Real Person I Was Committed To. A person who would have been cool with me hooking up with my crush if I'd had the chance to, but a Real Person I Was Committed To, nonetheless.

As we talked, though, I couldn't help but compare my partner to Josh, and was both surprised and pleased to find that as smart and cute as Josh was, as the spell wore off, I felt my Real Person was still the man I'd choose. I found the way he rested his hand on his leg sexier; I found his words even more intelligent. Plus, he actually loved me back. I haven't had a dream about Josh since, but if I do, I'll happily enjoy it, right along with my real, new dream of actually building a future with Jacob.

6. He Started Showing Up In My Escape Fantasies

I'm a chronic escape-fantasizer. Usually, fantasies have involved running away from whatever job/relationship/city I'm in and starting over anew, alone. In these fantasies, I'm writing better than ever, and feel truly alive and free.

Perhaps because I'm still allowed to have new experiences with handsome strangers, I've found that, even in my fantasies, Jacob is still there. He's a part of the adventure and novelty, and sometimes, he's even facilitating it. Either way, I want him to be a part of it — or at the very least, I want to be able to tell him about it afterwards.

7. I Didn't Imagine Breaking Up When The "Worst Case" Scenario Happened

About a month ago, a dermatologist told me that it looked like I had bed bug bites. For years, bed bugs and lice had actually been a crippling phobia in my life. It's a long story, but in short, when I got head lice in high school, I dumped my first love. I couldn't stand the idea of us reinfecting each other — he wasn't worth the risk. My parents were also in the process of divorce at the time, and this was the fear: that all love was eventually doomed; infectious, even. Better to just stay clean and safe, and only date people I could leave when things got infested.

While I've gotten much less phobic since then, bed bugs, or anything like it, remained my worst-case scary scenario, silly as that might sound to people with actual problems. In my mind, I've often known my relationships wouldn't last by applying the "bed bug litmus test." If my boyfriend had bed bugs, would I stay with him, or would I bolt in fear and self-preservation? Did I believe he had what it took to get rid of them responsibly and as quickly as possible? The answer was always no.

But when that doctor told me I probably had bedbugs, I didn't flash to a break-up scenario with Jacob. Instead, I thought, Will we have to move? and I need Jacob right now. Having this terminally affect our relationship was out of the question, as was the idea that he would ever not take charge when I needed him to handle sh*t most.

As it turned out, we didn't have bed bugs. But we did have something else to get rid of that still tested my fears, and through it all, he proved to me what I already knew: I can trust him to step up, and if I ever have to actually go through something seriously scary, like illness or death, I want him there with me. Love might make you hurt in the end, but for the first time, that's a risk I don't feel I have any choice but to take.

Some names and images in this story have been amended to protect the privacy of those mentioned.