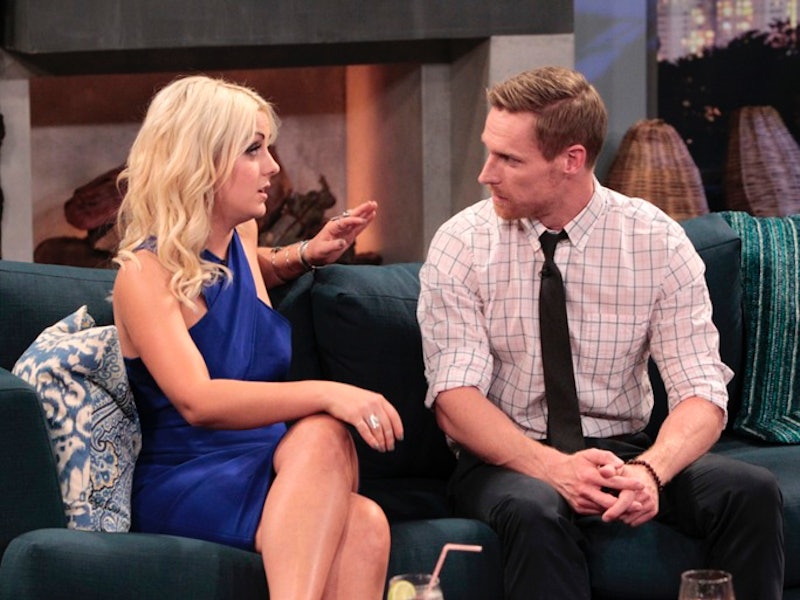 It's only been two weeks, but I'm already experiencing some major Bachelor in Paradise-related withdrawal. There's no more drama to witness on the beaches of Mexico, and Bachelor Nation is shut down until The Bachelor premieres in January, which means this is officially the worst part of the year. But, don't worry — there's still the opportunity to dissect BIP relationships, especially the ones that ended on a sour note, like Kirk and Carly did when they broke up on Bachelor in Paradise. They spent most of the season getting along and being adorable, until their relationship ended abruptly before the finale. As Carly has said before, Kirk deciding their otherwise happy relationship wasn't working came totally out of left field, so what happened? Did Kirk leave Carly for a girlfriend back home, or what? Actually, that's exactly what Carly claimed happened.

After the finale aired, Carly chatted with former Bachelorette Ali Fedotowsky for her blog, and the way she describes their breakup makes it sound like even more of a bummer than it already was. Allegedly, Kirk still had feelings for an ex he'd left back home, and being with Carly only made those feelings more clear...

Kirk never addressed her claims, but did say in an interview with The Ashley Reality Roundup that he broke up with Carly because he just wasn't sure of their connection. “I knew she was really invested and I was afraid it would become more so after the last overnight date. So, I did things the best I could by ending things before that happened," he said.

As Carly claimed to Ali:

Kirk actually had an ex at home that he couldn't get out of his head, so he went back to pursue what he had left at home. He said the more the weeks went on, the more he felt like he was stepping backwards to her instead of forwards with me. It hurt hearing that, but gave me a giant sense of closure. And, I knew that he was at least listening to his heart... and that's what we should all strive to do. I didn't bring this up on After Paradise because I didn't want to make it about a third party member, and I wanted him to bring it up first and foremost, which he didn't. I'm not sure about the status of that relationship. It breaks my heart to see all the hate he is getting. He doesn't deserve ANY of that.

I'm glad to hear that she was able to get closure, because I know as soon as she's able to move on, she's going to find an amazing guy. After all, her appearances on The Bachelor and BiP have proven that any guy would be lucky to be with her.

Hear that, men of Nashville? Hit Carly up. She's amazing.