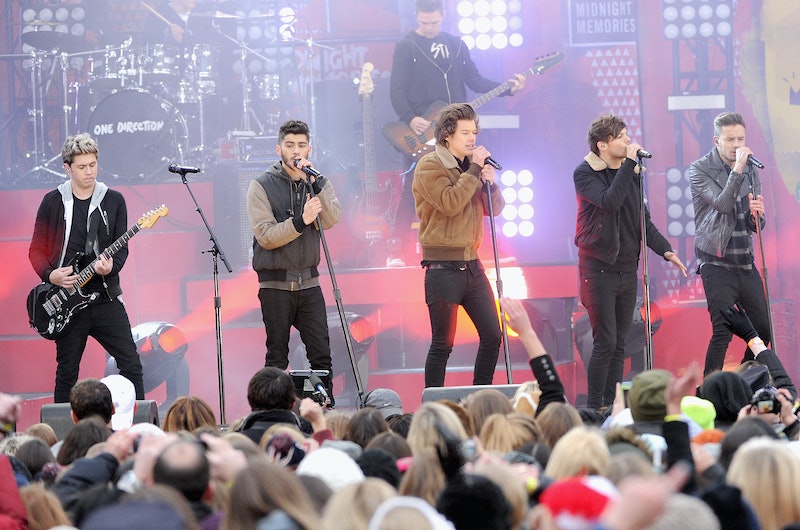 They already have a movie, won several music awards, appeared on Saturday Night Live and have thousands upon thousands of girls (and let’s admit it, grown women) swooning over them. Now, One Direction and their “Where We Are” stadium tour is expected to bring in over $1 billion, which would make them the first act to do so within a single year, beating out major artists like U2 and The Rolling Stones. So basically they would be breaking a record — just something casual to add the bucket list, you know? The 88-day stadium tour will kick off in 2014 and will take place in the United States, South America and Europe.

So with more obvious reasons like ticket sales and merchandise aside, here are some reasons that we feel One Direction will make that $1 billion mark. After all, U2 and The Rolling Stones? There must be something in the air for a three-year-old boy band to be able to top the likes of those major rock stars.

Obviously One Direction wouldn’t be anything without their fans, and really, that’s true for any musician or celebrity. However, this boy band’s fan base is absolutely insane. We’re talking Backstreet Boys x1000. I know this not only because one of my male — yes, male — friends dragged me to see the One Direction: This Is Us movie (which I’ll admit was pretty good), but I have also witnessed firsthand what a One Direction fan looks like, as have others I’m sure.

2. The Wrath Of Teen Girls Against Kendall Jenner

Poor Kendall Jenner. It hasn’t even been confirmed that she is dating Harry Styles, but everyone will believe what they read on the Internet, including One Direction fans. They’re also not quite fond of the young Kardashian family member and would most likely do anything to get her out of the picture. If we’re being frank, I can imagine that at least a fourth of the girls (or women) attending one of the band’s concerts are going simply to convince Styles as to why he should marry them. Seriously, fans will trick themselves into believing the craziest things. I’m still convinced Leonardo DiCaprio is going to come to his senses, realize how in love he is with me and sweep me off my feet. In due time. However, good luck to all the fans out there who are making it their mission to woo Styles from the nosebleed section of the stadium they’re in. He will appreciate the couple hundred bucks you are spending toward his tour.

3. The Power Of Social Media

I know you may all be surprised, as it seems that social media has been around for ages, but you would be completely wrong. In fact, Myspace (what is that dinosaur?), Facebook and Twitter were all created within the early 2000s. Crazy, I know. Although U2 and The Rolling Stones are both verified on Twitter, as well as having a social media presence elsewhere, neither group was able to make use of it when they first formed since outlets like this didn't exist. Now, bands like One Direction have a ridiculous advantage on their competition by being able to promote themselves online. When #wherewearetour2014 starts trending on Twitter, you know you’ve made it big.

4. A surprise appearance by Paul Rudd

If you were not dying from laughter after watching Paul Rudd’s performance on SNL when he acted like a huge fan of One Direction (although maybe he is), you might want to reevaluate your life. Surprise guests are always a must at any concert. At least they should be, because that would probably make the expense of the tickets that much more reasonable. I love One Direction too, but unless Niall Horan admits his love for me to an entire crowd of girls that would throw tomatoes at him if he did, then I’ll skip; I have bills to pay. However, if the band wants to get to that $1 billion, then bringing a surprise act on stage could probably push them over the top. Like if Lorde randomly appeared at one of their shows, because that would be hilariously ironic since she tweeted, “One direction are pretty overrated and their music isn’t really good I find it odd they’re famous” that one time.

Lastly, we should definitely talk about Niall Horan’s accent. Yes, I get that if you’re from any other place in the world that is not the United Kingdom, then they all have accents, but come on. Doesn’t everyone want a man with a great Irish accent? Maybe that’s just because I fell in love with Gerard Butler (even though he’s actually Scottish) in P.S. I Love You. I would maybe pay for a ticket if I could go backstage and have Horan talk to me with that accent. However, it’s likely that one of the reasons (not including all their hit songs) ticket sales are bursting is due to the fact that everyone just wants to hear them talk in person… because that’s what makes them beautiful. Hah, see what I did there? People seem to be so enthralled by different accents of the world, and I’m only sure of this because my father is English and everyone is obsessed with him.

So whether it’s to touch Liam Payne or Louis Tomlinson’s hair, or to convince Zayn Malik to call off his wedding with Perrie Edwards, it appears that 1D fans are doing a great job of boosting the band’s sales. Congrats, boys!

More like this
Kesha Is Down To Be The Next Bachelorette
By Jake Viswanath
Everything To Know About Taylor Swift’s 10th Studio Album, 'Midnights'
By Grace Wehniainen and Jake Viswanath
Dan Levy Appears In The Latest Teaser For The Weeknd's HBO Series, 'The Idol'
By Jake Viswanath
Beyoncé’s Special Tribute To Sister Solange Was Both Touching & Hilarious
By Stephanie Topacio Long
Get Even More From Bustle — Sign Up For The Newsletter