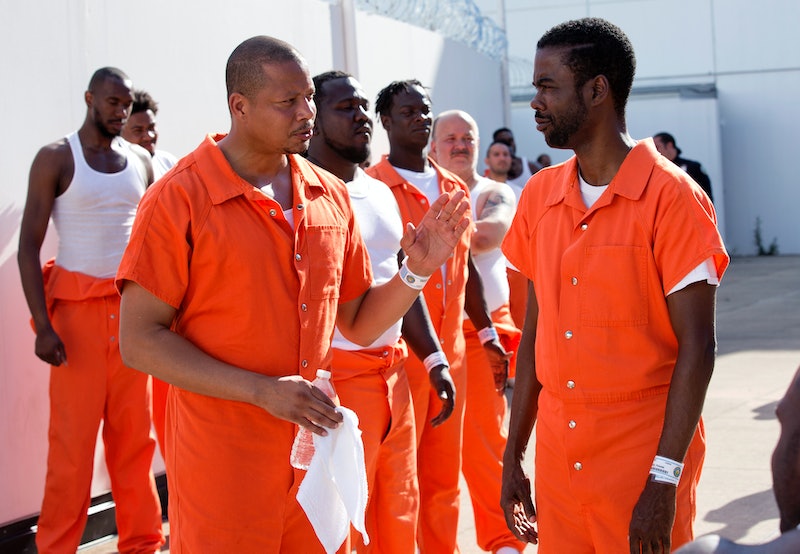 The love/hate relationship is still thriving on Empire, as the Season 2 premiere gave viewers more even reasons to both love and hate so many of the main characters, especially Lucious Lyon. Even though we know the music mogul is guilty of murdering Bunkie, he may be released very soon, since the main witness testifying against him, Vernon, was accidentally murdered by Andre and Rhonda. Lucious continues to be a jerk even behind bars, poisoning Jamal's mind and basically running Empire for him, tearing his family apart in the process. Yet at the same time, he is also protecting his family in a big, big way, as Lucious had Frank Gathers killed in the Season 2 premiere. And though that worry may now be over, it could be the start of Lucious' real legal troubles.

Here's what we do know about Lucious' prison situation for the time being. Vernon is dead and the prosecution has no evidence to keep Lucious locked up, which means the king of the Empire may be granted bail soon, or his case could be completely thrown out. But there is one major problem standing in his way: The prosecutor. She's already broken the rules by visiting Lucious and threatening to lock him away forever, so clearly she's willing to do whatever it takes to make this conviction stick. If you've forgotten what exactly lead up to Lucious' arrest, check out the Empire Season 1 drunk recap video below.

I would be genuinely surprised if the prosecutor doesn't find out about Lucious having Frank killed in prison. Sure, the guards left the room where Lucious confronted him, and sure, Frank's bodyguards were easily swayed to Lucious' side after he made them a bunch of promises of money and fame. But she has law on her side and could easily threaten these men until they're willing to flip on Lucious.

I think Lucious will stay behind bars for a while on Empire, and will be the start of knocking this man, who believes himself to be so powerful, down a few pegs. It hasn't happened yet, since he's already ruined Cookie's hostile takeover while still in prison and just had someone killed with no immediate punishment. But someone has to be able take Lucious down. He made a mistake by killing Frank in prison, even if it was for the safety of his entire family, and now it's finally time for Lucious to pay. He won't be running the Empire forever.