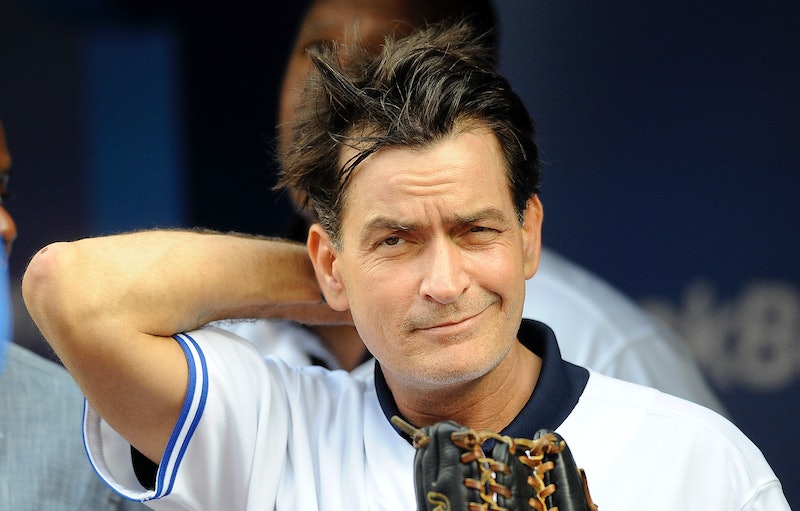 Charlie Sheen, learned man of letters, has taken up his mighty quill in hopes of lambasting America's current dead horse of ignorami everywhere, Duck Dynasty star Phil Robertson and his no-good, very-bad, idiotic comments that grossly misrepresented gay and black Americans. And unless you are one of "the army of scabies and bull weevils sequestered deep in [the] sarcophagus of dander and weasel pelts" that Sheen oh-so-eloquently calls Robertson's beard, you've probably read a thing or two about it on the Internet. People are very upset about it! On both sides of the proverbial coin. Fans of Robertson's — from Sarah Palin and Ted Cruz to a random follower of Michael Ian Black — purport that the GQ Magazine interview represented the Ducky patriarch's freedom of speech, freedom of opinion, and freedom to willfully disregard millions of people's sexualities and existences based on his own narrow experience and the words of a book written thousands of years ago.

Naturally, in this sort of debacle, things gets heated quite quickly. Emotions are involved and when that happens, impassioned nuttery ensues — for better or for worse. So we figured it was best to approach Sheen's poetic justice with the balanced and steadied hand of an English Major: giving the piece the respect it so requires, given the educated malevolence with which he picked these words. A close-reading of such a literary stroke is the only way the audience can truly understand the depths Sheen mines with his subtle wordwork.

hey Mallard brainedPhil Robertso!you have offended and hurt so many dear friends of mine,who DO NOT have the voice or the outreach that I do.well news flash shower-dodger,I will speak loudly and clearly for ALL of them.so,just when your desperately sub evolved ass thought the pressure was off,you are now in the crosshairs of a MaSheen style media beat down. (I'll try to keep the big words to a minimum as not to confuse you)your statements were and areabhorrently and mendaciously unforgivable.the idea that you have a joboutside of dirt-clod stackingis a miracle.the only 'Dynasty' you are attached to might be the re-runs of that dated show.the only thing you should ever be in charge of building is a hole in the ground the exact size of your head.perhaps your beard would fit as well if you plucked out the army of scabies and bull weevils sequestered deep in it's sarcophagus of dander and weasel pelts.shame on you.you're the only surviving brain donor I've ever known.when the gators and Egretskick you out of their hovel,you need to make serious amends to those you have radically offended.on the eight day when I was whittling my cosmic banjo,I'm pretty sure YOU were the scattered dross I then used to light a fire and locate the nearest Andy Gump.repulsed by you;c sheenhash tag;Duck; that was me.

Breathe that all in? Absorb all of its layered workings? Then you've already noticed that Sheen takes a clearly defensive tone from the outset as a means of debunking the myth that poetry is a stuffy, pretentious form of expression. In that way, Sheen is hoping to bring the reader, the subject, and himself all to the same, level playing field. He does this in a variety of ways, most notably in pointed details regarding Robertson's very existence. Sheen misspells Robertson's name as "Robertso!" — no doubt reflecting on the power dynamic that's set-up by the star's mere existence. Robertson is a firework, explosive and quick to burn out before the end. No doubt this misspelling was a purposeful attempt at reminding Robertson that his fame is fleeting, whereas Wild Thing is forever.

From there the taunts continue: "hey Mallard brained ... shower-dodger ... sub evolved ass ... only survivor brain donor ... scattered dross." Sheen's descriptions of Robertson relate to the negative connotations associated with Robertson's perceived everyman, Middle America status (further accredited via his Andy Gump reference: a popular comic strip that ran for 42 years in American newspapers). These insults, served at regular intervals throughout the piece are to remind Robertson that Sheen perceives him as unintelligent; his words lacking merit, significance, and meaning to a wider world of which Sheen considers himself a part.

In this wider world, intelligence of the book and life-lesson variety are of utmost importance. Sheen claims he will "keep the big words to a minimum" before immediately declaring "your statements were and are / abhorrently and / mendaciously unforgivable," to purposefully flaunt a level of disrespect that he harbors for Robertson while simultaneously insulting his intelligence. Here, Sheen is further asserting his alpha-status as a means of intimidation. A logical approach to a poem that is written for a man who spends his days turning wood into duck-deception, murder-by-proxy devices. Robertson is salt-cured and hardened. He cannot be won in a traditional sense — only battled until superiority is asserted, hence the tonal message of the poem.

Sheen brings the entire story to a close with an e.e. cummings-styled send-off, combining his brevity and love of undercapitalization with the timely-but-deconstructed inclusion of a hashtag reference. It's a way to tie together his feelings on the importance of language and an understanding of the ever-evolving history of the world and the unique experience of homosexual and black humans (with special significance placed on their experiences in America, Robertson and Sheen's homeland).

Sheen's words are forceful and leave little room for interpretation: "repulsed by you; / c sheen / hash tag; / Duck; that was me." His disregard for grammatical structures, rules (as evidenced by his copious use of the semicolon), and nuance lend themselves to a far more metaphorical journey: one in which Sheen can bandy the rules of language about as careless-yet-pointedly as Robertson did with history and the homosexual male experience.

Truly, in these last two lines, one can see the culmination of Sheen's diatribic poem and what it all means. Namely that Robertson's ignorant views were just that, and this whole debacle has grown just as silly as the modern day language, social, and media structures that surround it. As for the photo of a bird that's not a duck? Well that's just all about irrelevancy. Hashtag poetry, hashtag the end.

More like this
Lilibet & Prince Charles’ First Meeting Was Emotional, According To Reports
By El Hunt
'Mean Girls' ​​Daniel Franzese Spoke Candidly About Conversion Therapy
By Rachel Mantock
Viktor Hargreeves’ Coming Out Scenes Are The Sweetest Part Of Umbrella Academy Season 3
By Gretchen Smail
A New ITV Doc Follows Dame Kelly Holmes’ Emotional Coming Out Story
By Sam Ramsden
Get Even More From Bustle — Sign Up For The Newsletter