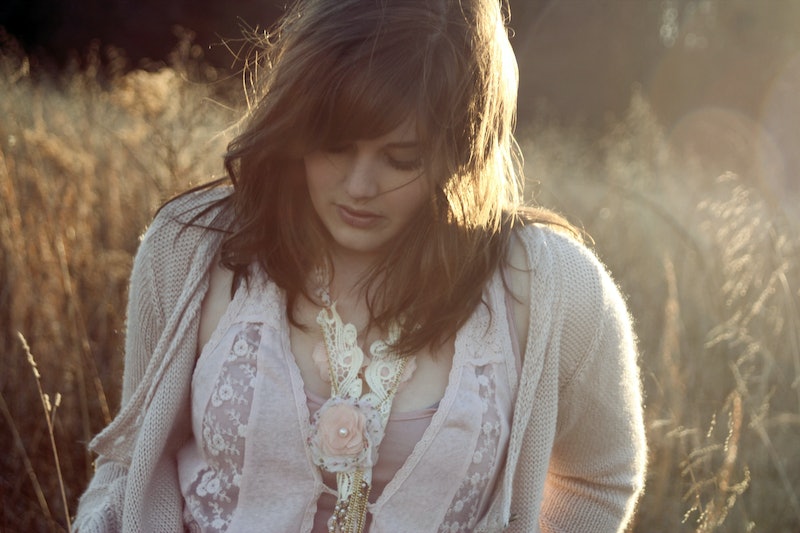 Any woman who flirts with the idea of having kids becomes concerned at one point or another about her chance at conceiving. No matter our age or position in life, we all go through doubts about our own levels of fertility — and sometimes we stress ourselves out over it. There are so many statistics floating around out there these days that basically tell us we're doomed after 35. Let's not get caught up in the baby panic, though. It pays to start with reason and logic, and separate the myths about fertility from the actual health risks to fertility.

The Center for Disease Control and Prevention (CDC) found that six percent of married American women are infertile, and 6.7 million women are having trouble conceiving. Those numbers aren't fantastic, but there's no need to get scared by them. A part of getting pregnant is living a healthy lifestyle — for example, 12 percent of infertility is due to obesity or being dangerously underweight.

What's important is that you open up the conversation with your doctor early enough so you can figure out if there are any parts of your reproductive system that could use a little attention. As always, educate yourself; there's plenty of information out there to keep you in the loop.

Ten percent of adult women suffer from PCOS, a condition that causes the ovaries to produce abnormally high amounts of androgen, which are "male" hormones such as testosterone. Two other symptoms are irregular menstrual cycles and the existence of twelve or more follicular cysts on the ovaries. The increased levels of androgen result in lower production of follicle-stimulating hormone — as a result, follicles aren't able to produce a mature enough egg for pregnancy.

What follows is more swollen follicles, also referred to as cysts, and every time an egg is formed, it continuously gets trapped inside, swelling up the ovaries. Adding to the imbalance is the lack of progesterone being produced, yet the estrogen level remains normal.

While none of this bodes well for ovulation cycles (some women stop ovulating altogether), it doesn't mean you're not meant to get pregnant. Dr. Robert Barbieri, head of obstetrics and gynecology at Brigham and Women's Hospital told the New York Times that, although there is no cure for PCOS, most women find the proper treatment and go on to have perfectly healthy babies.

In a nutshell, PID is an infection of a woman's reproductive organs, mainly caused by an STD — gonorrhea or chlamydia — or pelvic tuberculosis, which is apparently a thing. Sadly, PID is a major cause of infertility in the United States, and it doesn't only affect your chance to conceive; it can have a negative impact on the appendix and parts of the intestine.

PID could result in scarring, abscess formation, and tubal damage, all of which can make it difficult to get pregnant. Twenty percent of women who regularly battle these symptoms of PID will have trouble with fertility, and suffering from this disorder puts you at a higher risk for ectopic pregnancy.

There aren't any specific tests to see if you have PID, but your OBGYN can run some other tests and take a look at your history to see if you fall in this category. Some common symptoms that point to it include fever, pain in the lower abdomen, untimely bleeding, and burning when urinating.

What causes endometriosis is unknown, although it runs in the family and has been linked to biochemical and immunological changes. It's a disease that results in the uterine lining growing on the outside of the uterus, on places like the ovaries or the perineum. Thirty percent of infertility cases are related in some way to endometriosis.

More in-depth research is being done to understand the disorder, because it affects a huge amount of women around the world in scary ways. For example, females who have endometriosis are 76 percent more likely to miscarry and three times more likely to have an ectopic pregnancy.

A four-year-long study tracked 401 women, taking samples of their saliva to keep track of the enzyme alpha-amylase and the hormone cortisol. Researchers found at the end that those with high levels of alpha-amylase, which is tied to "longstanding stress," were twice as likely to experience infertility, regardless of race, age, or history. Every month, their ability to conceive dropped 29 percent compared to those who weren't under the same emotional and mental pressure.

One of the leaders in the study advised that, when thinking about getting pregnant, women consider their chronic levels of stress and start using relaxing techniques regularly, like yoga and meditation, rather than engage in those other activities (ahem, two nights out in a row) that generally accompany stress.

This is a fancier term for early menopause, and one in 1,000 women between the ages of 15-29 and one in 100 women between 30-39 face it. Loss of periods, hot flashes, and vaginal dryness are common symptoms hinting that this disorder is on the horizon. Rarely can medical professionals pinpoint a specific cause when it arises in young women, even though there are various factors that could be related, such as ovary defects.

In this condition, the follicle-stimulating hormones increase and infertility is a common result. Women who have been suffering from premature ovarian failure have a 5-10 percent chance of conceiving — but that statistic is for those who haven't tried treatments. There are certainly options out there that could significantly raise your ability to get pregnant.

Prolactin is a hormone produced by the pituitary gland that halts the production of the follicle-stimulating hormone and the gonadotropin-releasing hormone, both of which pave the way for ovulation and allow eggs to develop. Having too much prolactin in the body, a condition called hyperprolactinemia, is tied to an under-active thyroid gland or certain medications that cause this imbalance.

In order to prevent this from affecting your fertility, speak to your doctor about finding out what the underlying problem is; it's much easier to raise your likelihood for pregnancy when the prolactin levels are taken care of.

Scar tissue in the abdomen that develops after surgery could cause infertility by limiting the movement of ovaries and fallopian tubes. Asherman syndrome is scarring of the uterus, usually from surgery or serious injury, that causes obstructions, including the eggs safely passing through the uterine wall.

There are also inborn genital tract abnormalities to be aware of, like Mullerian agenesis, which is a malformation in which the vagina or uterus doesn't fully develop. In vitro fertilization is an option for these women, but it's always best to speak with your doctor about what your options are.