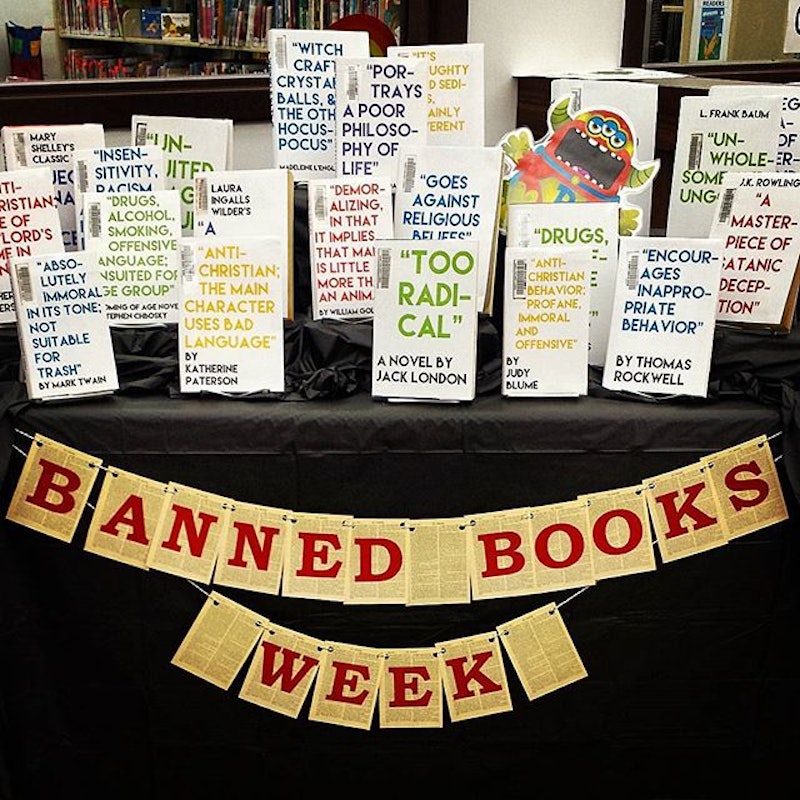 Did you hear that — the ominous fluttering of a perilously ink-stained piece of paper being flipped from one side to the other? Yikes. I don’t know about you, but to me it definitely sounds like someone out there is reading a banned book. The Lorax, perhaps?

That’s right, Banned Books Week is here, which means rebellious readers everywhere are gearing up for a week of… well, reading even more rebelliously than you already do every other week of the year. (Because you rock.) In case you haven’t heard, each year members of the entire literary community — from writers to readers, and everyone in between — gather together around Banned Books Week to draw attention to national issues of censorship, and to promote unrestricted access to literature and information. Sounds pretty cool, right? The 33rd annual Banned Books Week starts Sunday, September 27. It's time to plan all the fantastic ways you’re going to celebrate the freedom to read this year.

Need some suggestions? I’ve got you covered. Here are 6 ways to participate in Banned Books Week, support writers whose books are still being challenged, and celebrate the freedom to read all those books you love.

Get Yourself Some Swag

You can find tons of Banned Books Week swag all over the Internet. Plus, knowing that a percent of your purchase goes towards supporting the freedom to read will make you feel even better about spending those hard-earned dollar bills of yours. The only thing better than shopping, is shopping for a cause.

Now that you've gotten yourself all that cool gear, post a selfie to show it off! Or, just do what the people above did, and post some pics of yourself reading banned books. Don't forget to use the hashtag #bannedbooksweek so we can all admire the daredevil reader in you too.

Get in touch with your local library or bookstore and see if they'll let you host a banned books read-a-thon (or maybe they've already got one in the works.) Either way, you know you've been looking for an excuse to read The Absolutely True Diary of a Part-Time Indian again.

If You Know About A Book Ban In Your Area, Speak Out

Although it's rare for a book to actually be banned here in the U.S., tons of books are challenged and recommended for removal from school reading lists, classrooms, and library shelves all the time. If you know about such a challenge, say something. Write an opinion piece for your local newspaper, send a letter to your school board, or start a petition. Sometimes you gotta defend your right to read!

Learn More About Writers' Rights Around The World

OK, Ima get serious with ya'll for a minute, because this is an important one. We might have to contend with that extra-conservative school superintendent, or some disgruntled PTA members now and again, but there are writers all over the world who are risking not only their freedom, but their lives, in order to express their opinions freely. PEN International honors the Day of the Imprisoned Writer every year, and just recently a group of writers in the west joined together to advocate for the release of four writers currently imprisoned in China. You also might remember the protests this summer, in defense of Saudi Arabian blogger Raif Badawi who was sentenced 10 years in prison and 1,000 lashes for allegedly insulting Islam. These are the writers who need advocates the most. So learn more about their cases, and find out what you can do to make a difference.

Because that's the whole point! Check out this list of 25 of the most challenged books of the last 15 years, and read on, my rebel readers.