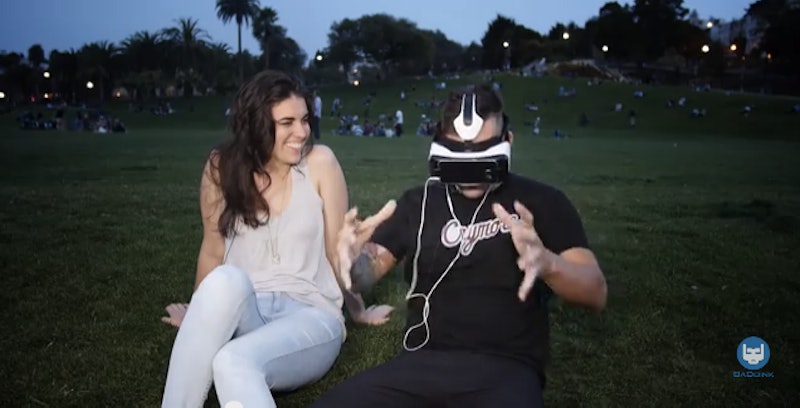 Check out how happy they are, though:

Take a look at my favorite moments of the video, so you can get a taste of all the VR glory.

1. "Or if I don't have a girlfriend and I just need to practice."

The most shocking thing to the viewers was that they were involved in the scene, as you can see with this guy excitedly grabbing what I can only imagine is a pretty fine bottom.

This guy did not get so involved, but faithfully recited what was happening.

Said the woman who apparently has never touched a human breast before.

When this guy realized he was in it, he was very happy. His friend looked unimpressed.

No-hands guy has stopped talking, and just smiles for a longer period of time. He is in his happy place.

8. "I'm the one that someone's doing something to."

One of things everyone noticed is that the "me" in the video is pretty hot — the men commented on their fine abs, the women on their perky boobs.

Want more of Bustle's Sex and Relationships coverage? Check out our latest video on sex positions for small penises below:

More like this
I'm 42 & I've Never Had Sex. Is It Too Late?
By Sophia Benoit
Here’s How To Deal With Sexual Frustration If You Don’t Want Casual Sex
By Annakeara Stinson and Mackenzie Sylvester
Here’s How To Reignite The Spark In A Sexless Relationship
By Vanessa Marin
What Makes A Sally Rooney Sex Scene So Hot?
By Samantha Leach
Get Even More From Bustle — Sign Up For The Newsletter