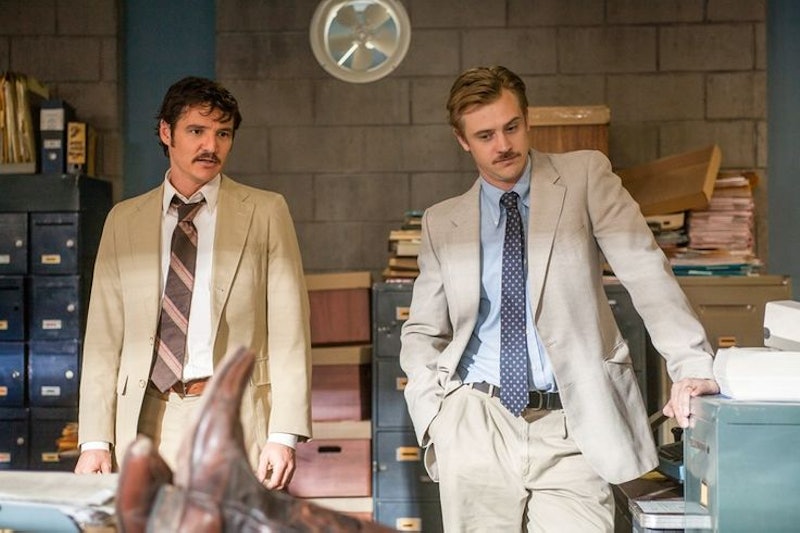 Netflix’s new hit drama series Narcos intertwines fictional reenactments of true events with real news footage, making the series feel more like a documentary or a very high caliber episode of America’s Most Wanted. Some creative liberties are taken, of course, but, for the most part, the series depicts the stories and lives of real people — like DEA agents Steve Murphy and Javier Peña.

A lot went into the series and depicting these stranger than fiction events as accurately as possible. And, retired DEA agents Javier Peña and Steve Murphy assisted in making sure the show was as true to life as possible by acting as consultants. In addition to giving their accounts of Pablo Escobar’s rise and fall, the pair also gave input on the show’s details, like the types of guns they carried, the procedures they followed handling informants, etc. While there are real men behind Boyd Holbrook and Pedro Pascal’s portrayals of Murphy and Peña, viewers of the show don't get to see the real agents ever.

So, what do Narcos’ Steve Murphy and Javier Peña look like IRL? Here are pictures I found on social media of the real agents in action. [Warning: There is a graphic, real news photo of Escobar's capture ahead.]

The partners circa the Pablo Escobar manhunt.

The mustache game was just as strong IRL.

He may have retired, but his mustache did not quit.

This famous, graphic image was circulated after the death of Pablo Escobar. Yes, that is Steve Murphy.

Since they're working with the show, it would be fun if the actual Murphy and Peña got to make cameos in Season 2, but for now we'll have to settle for these pictures of them to see what they're like in real life.