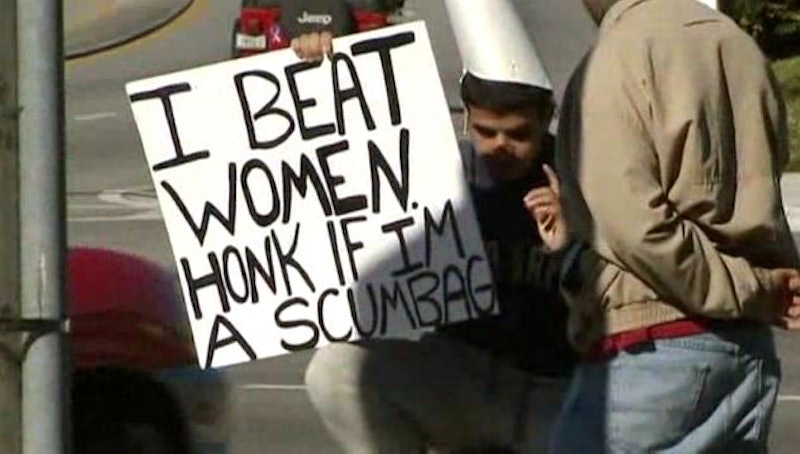 An ugly domestic abuse story took a turn for the perverse this week. A Florida woman made her attacker wear a sign that said "I BEAT WOMEN. HONK IF I'M A SCUMBAG", electing to publicly shame rather than press charges against the man who attacked her last Saturday night. "He's doing it because he doesn't want to go to jail," the woman, Alisha Hessler, 20, told a local ABC news station of the alternative punishment: standing at a busy Tampa intersection for eight hours, wearing a dunce cap, and holding the sign.

For a second it seems kind of funny — until you think about the future women this scumbag could be beating (or worse). And what makes this story especially strange/depressing is that Hessler had no prior relationship with Scumbag. Her leniency isn't based on any sort of love or fear or connection. According to ABC, Hessler just met the man on Saturday, through friends. When he started "making unwanted sexual advances" in the backseat — no word on who was in the front seat or what they were doing — Hessler said no and resisted.

"That's when he started beating me repeatedly until I had a broken nose and a concussion," she said.

So: Holy effing shit. A lot of men feel kind of quietly entitled to sex, but this is a guy who beat a woman he just met because she wouldn't do whatever he wanted. Possibly in the presence of other people. This doesn't sound like a guy who feels many qualms about violence against women, so I'm guessing this isn't the first or last time something like this has happened. Hessler wound up in the hospital, and filed a police report Sunday morning.

"But in a peculiar turn of events, she decided to not press charges. Hessler found the man on Facebook, who we're choosing not to name given the circumstances, and gave him the following ultimatum. "I can either press charges and have you arrested for a year or I can have you sit outside at a busy intersection for eight hours holding up a sign that says I beat women," Hessler said.

Okay, but those things are not remotely comparable. Even casting aside the safety of other women, isn't Hessler worried he'll come after her again now? The kind of man who beats women who won't have sex with him probably doesn't take too kindly, either, to being humiliated by a woman.

"There's so many problems with this," Mindy Murphy, CEO of Tampa-based domestic violence center The Spring, told ABC. "Women die every day at the hands of abusers. Sexual assaults occur every day. The fact that we've got a guy sitting in a dunce cap with a sign on the side of the road really is trivializing a serious issue."