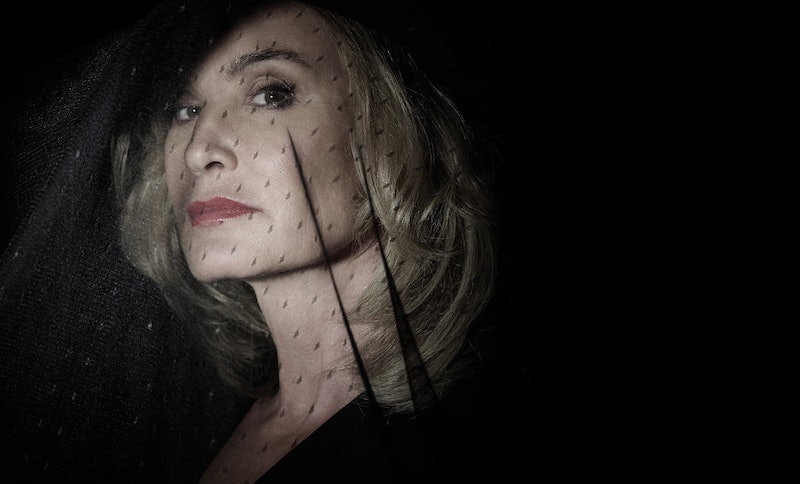 We all remember the scary movie moments that shaped us. Mine was in Jurassic Park. Yes, that's right — Jurassic Park. The lowering of the cow into the T-Rex enclosure, followed by a bovine scream and the reemergence of a tattered cow-rope, haunted me for years. I have friends who won’t go near deep water because of Jaws. Clowns seem to freak out basically everybody. But what actually happens to our bodies when we’re watching scary movies — and why do some people actually enjoy it?

An ex-boyfriend, puzzled as to why I hated horror films, asked to show me one of the most gruesome films ever made (at the time it was banned in Australia, so I won’t name it). The twist? The film has no suspense, no sudden shocks. And there’s a lot of very twisted gore, but the subject of it is shown to be under sedation and feels no pain. The result? I wasn't scared at all. Without suspense or the threat of real bodily agony, my body simply didn’t react, except with disgust. It’s not the dark we’re afraid of: it’s what’s lurking inside it, about to jump out at us.

So why do some people enjoy what happens to our bodies during horror films? We don’t really know. There are a lot of theories: it might make us feel powerful to survive something so threatening, it might be an outlet for aggression in a basically peaceful society, or we may just like being scared in a safe space where we know we’ll get out alive. (Unless the movie theater turns out to be showing Michael Jackson’s Thriller. In which case we’re all doomed to do the zombie dance.)

What we do know, however, is what happens to our bodies when we watch scary movies. Let's take a look.

Horror movies are, essentially, contained and mass-marketed fear. The suspense of the unknown, and the sudden shock of the appearance of Freddy Krueger or the Blair Witch or whatever your antagonist of choice, causes the body to experience terror — and nowhere is that more directly felt than in heart rate.

An increase in blood flow, from the heart to the extremities, is actually a very sensible evolutionary reaction to fear. The more blood is pumping, the faster you’ll be able to move when something chases you, and it doesn’t matter if it’s a lion or some lunatic with an axe. Increased heart rate, with fear, also goes hand in hand with increased respiration rate — to get as much oxygen into the body as possible, in preparation for either fleeing or fighting whatever's scaring you.

Muscle tension is, as anybody who's ever had panic attacks attest, one of the body's most easily noticeable signs of significant fear. Panic attacks come out of nowhere with no threat in sight, but when the threat's on screen, you'll find your muscles automatically seizing up too. It's a classic response to stress or terror, and represents a signal from your body's noradrenaline (a hormone that carries messages around the body) to get ready for something big. Hence why you may find yourself unconsciously ripping up the arms of your chair in the movie theater.

Going to a horror film actually puts your body under quite a lot of psychological and physical stress. You're putting yourself in what feels like a life-threatening situation — and even if you're conscious of the fact it's not real, your body isn't. (Indeed, the best films are the ones that conceal that fact as much as possible.) So it shouldn't be surprising that horror film watchers see the "stress hormone," cortisol, rocket while they're watching knives in the dark.

Cortisol is a bit of a nasty one, as far as after-effects are concerned. It's linked with memory loss and psychological difficulties like depression. But, most worryingly, cortisol release also leads to the rise of bad memories from the past — because it's a part of how those bad memories got embedded in the first place. Stress from a horror movie may have the unintended effect of making you recall a bad breakup from six years ago, and you won't know why.

Interestingly, and probably for reasons similar to those that motivate your raising heart rate and breathing levels, when you're watching a horror film, your eyes also move considerably more — both from side to side and up and down. This seems to be specific to the movies, too: the study that discovered it focused on how our eyes and breathing react when we're facing down Hannibal Lector or Chucky.

Part of that will be the experience of the movie itself. Horror films are often calibrated to keep your eyes moving, with lots of cut frames and frantic editing, to enhance the feeling of panic and claustrophobia. Not being able to keep focused on one thing may be a pretty useful psychological trick for triggering fear. But it also seems that rapid eye movement could help us track our enemies or threats — so it's not all that surprising.

Adrenalin is the body’s key response to stress or fear. It’s the trigger for the fight-or-flight response, the enormous rush that leaves you panicky and, supposedly, ready for anything. And it's this factor that, some scientists think, may explain the real pleasure that some people experience in the wake of a massive scare.

Adrenalin is not, generally speaking, great for you — but a huge burst of it in the body may lead to an unexpected feeling of pleasure. After an adrenalin rush, you may feel full of energy, extremely alive, and very alert, all qualities necessary for a quick escape from Frankenstein's monster. It's commonly reported in athletes, but for others it may be extremely worrying and uncomfortable to be so hyped-up, and the terror may outweigh the afterglow.

In 2008, University of Bonn researchers found something distinct in the genetics, and therefore brain chemistry, of people who scare very easily (or at least some of them). If you have two copies of a particular gene rather than one, you’re much more likely to be upset by disturbing or upsetting images. Doubling the genes meant you were terrified, but only having one copy meant you were unlikely to understand what the fuss was all about; the scariest images wouldn’t phase you.

But, crucially, the study didn’t actually show the test subjects any films, just still pictures. So it’s not yet known if this genetic doubling would have the same sort of affect on people in movies — where, after all, the impact is a product of narrative, music and suspense, not just blood spatter.

A study in 2013 showed that another aspect of brain chemistry also affected our enjoyment of terror: how our brains react to dopamine release during a scary situation. Dopamine, generally thought of as a good-time chemical, is released in upsetting circumstances too, and may motivate some people to seek out terror. It seems clear that your brain chemistry has a pretty large role in how you respond to potential sources of fear or distress.