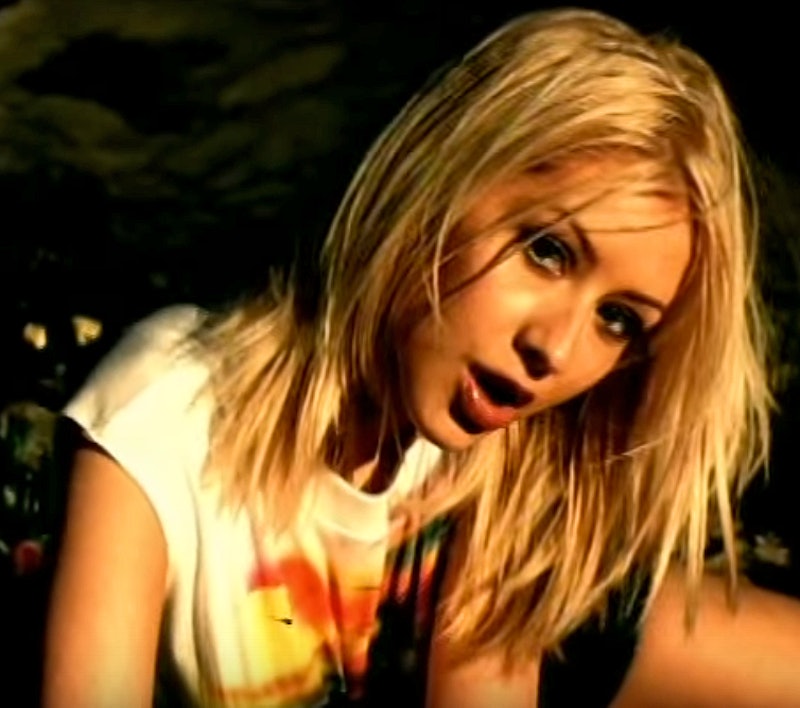 Generally speaking, if a pop song isn't about love or partying, it's probably about sex. However, if you were a kid in the '90s, you may not have realized just how dirty '90s song lyrics are. And yes, believe it or not, I'm talking about some of the lyrics to your favorite tunes. It's not that we were all completely oblivious to sex growing up. No, I think our occasional ignorance had more to do with the fact that we didn't always understand innuendo (or pay close enough attention to the words we were singing along with).

Hilariously, I distinctly remember changing the channel every time the music video for Marcy Playground's 1997 hit "Sexy and Candy" came up on VH1, because I couldn't bear to be in the same room as my parents while a song with the word "sex" in the chorus played in the background. But, when you think about it, the "Sex and Candy" lyrics really aren't that dirty. As it turns out, there were a bunch of other tracks I should've been much more concerned about!

Here are 11 '90s songs with lyrics much dirtier than "Sex and Candy" (and you probably had no idea):

These two aren't spending the night talking about their hopes and dreams, that's for sure. (Side note: OK, so "boom" is obviously a euphemism for having sex, but what does "double boom" mean? Especially after he just sang the word "boom" four times in a row? Is that a "quadruple boom"? Some mysteries may never be solved.)

Dirtiest lyrics: "Baby, when we're grindin', I get so excited / Oh, how I like it, I try but I can't fight it / Oh, you're dancing real close, plus real, real slow / You're makin' it hard for me"

You probably knew "Too Close" was a sexual song, but you may not have realized it's about dudes casually popping boners in the club. You know, like one does.

Five — "When The Lights Go Out"

Dirtiest lyrics: "It's a black out, girl / The lights are off / I can feel you getting close, now take your clothes off / Your body looks so soft / In between the sheets I'll lay you down, girl / I wanna knock your socks off"

I guess this song isn't about telling scary stories in the dark, after all.

Dirtiest lyrics: "You can brush my hair, undress me everywhere / Imagination, life is your creation" + "Kiss me here, touch me there, hanky panky"

Yeah, this ditty is basically just about Barbie and Ken knockin' boots all day, every day.

"Right Now" sounds so carefree and lighthearted, you probably didn't notice just how naughty its lyrics are.

Again, you probably knew "Pony" wasn't about having a fun day at the petting zoo, but you may not have completely understood what Ginuwine is asking this woman to do. (Hint: The "pony" is his donger.)

Dirtiest lyrics: "Ready, set, go / You don't have to know / We can take forever, learn together any flow / Touch me slow, watch it grow / Kiss the tip, gently flow, be my ho and tape the show / We can watch it in slow-mo, when the Sweet and Low drips / Don't forget to let me rub my finger tips"

Christina Aguilera — "Genie In A Bottle"

Dirtiest lyrics: "If you wanna be with me / Baby, there's a price to pay / I'm a genie in a bottle / You gotta rub me the right way"

OK, this is barely even innuendo. I don't know how we all didn't pick up on it as kids.

Dirtiest lyrics: "An older version of me / Is she perverted like me? / Would she go down on you in a theater?"

I loooved "You Oughta Know." Third-grade me knew Alanis Morissette was singing about Uncle Joey from Full House (scandalous!), but I had no idea what was "going down" in that theater.

Dirtiest lyrics: "My loneliness is killing me (and I) / I must confess, I still believe (still believe) / When I'm not with you, I lose my mind / Give me a sign / Hit me, baby, one more time"

No, the chorus probably doesn't mean "hit me up on my beeper one more time."

Dirtiest lyrics: "Felt it in my hips so I dipped back into my back of tricks / Then I flipped for a tip, make me wanna do tricks for him / Lick him like a lollipop should be licked" + "They want my bod, here's the hot rod (hot rod) / Twelve inches to a yard"